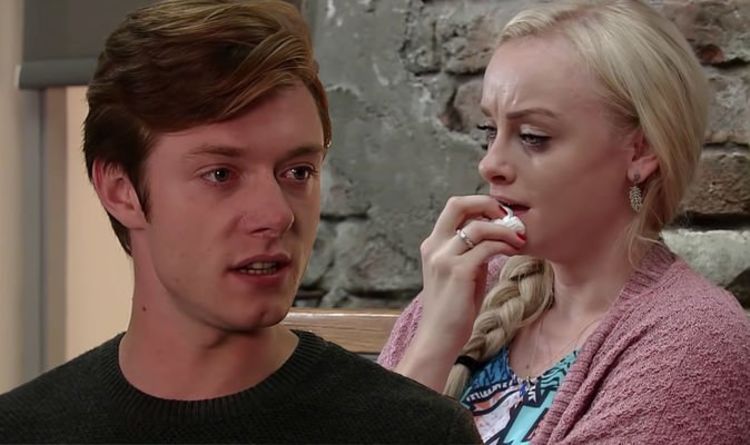 Coronation Street resident Sinead Tinker (played by Katie McGlynn) recently found out the cancer treatment she had been receiving was not working to cure her from cervical cancer.

Determined to fulfil the final months of her life, the seamstress has been planning an official wedding ceremony for herself and husband Daniel Osbourne (Rob Mallard) to make their marriage legally binding.

But according to the latest soap spoilers, the occasion is going to be bittersweet for both Sinead and Daniel.

In upcoming scenes, viewers are going to tune in and see Bethany Platt (Lucy Fallon) get closer to Daniel as they work alongside one another in the Bistro.

Official pictures released by Coronation Street show the pair within close proximity of one and reveal how an argument leaves them in an unexpected situation.

Following the heated exchange, Sinead drops by with baby Bertie to discuss the wedding preparations, but notices a weird energy.

As she confides in her husband about her worries and her cancer, Daniel offers nothing but support and advice and even suggests cancelling the event if it will ease the pressure.

But during their conversation, Sinead can’t help but notice the fleeting glances Bethany is sending Daniel’s way.

Does she realise there are feelings developing between Daniel and Bethany?

Nevertheless, it is highly possible the wedding will take place, but behind the decorations, cake and music is a concerned Sinead.

While no official ending has been revealed for Sinead’s cancer storyline, there have been reports that she will face the tough decision of spending her last few weeks in a hospice.

Should her cancer be confirmed as terminal, Sinead will have a lot of time to think about the legacy she wishes to leave behind to Bertie and Daniel’s future.

Therefore, Sinead could give her blessing to Daniel for him to find after she has passed.

Could viewers see Sinead pull Bethany to one side and explain to her how she should support Daniel through his grief and ultimately give her her blessing for them to get together when the time is right?

In recent scenes, fans saw the builder beat up Ryan, leaving him black and blue after he failed to make the payments on the loan he had taken out.

However, actor Ryan Prescott has spoken out about what’s to come for the two characters and teased a possible head to head.

Should Gary be worried as Ryan creates a revenge plan?

Coronation Street returns tonight at 7.30pm for an hour long episode on ITV.