Coronation Street spoilers: David and Shona to break up after cheating? 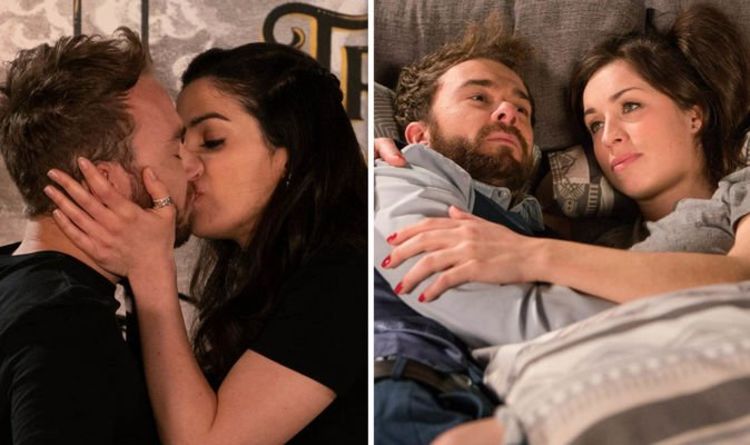 Natalie Watkins (played by Cassie Bradley) is due to make her move on David Platt (Jack P Shepherd) on Coronation Street tonight (Friday, May 24) on ITV. David’s cheating could cause him to break up with girlfriend Shona Ramsey (Julia Goulding) in the coming weeks of Corrie. ITV has also revealed that David and Shona could face big relationship battles in the coming weeks.

Will David and Shona break up on Coronation Street?

Though it might be only a temporary setback, ITV has revealed that David and Shona will come very close to breaking up as a result of Natalie trying to steal him.

On next week’s episodes of Corrie, Shona will see David and Natalie having what she thinks is an intimate moment and will call off the engagement.

This all kicks off as the Platts go on a camping holiday as a gift from Audrey (Sue Nicholls).

An ITV synopsis says: “If Nick and David thought they’d be leaving their troubles back in Weatherfield, they are very much mistaken when an unwelcome visit from Natalie sends the brothers into a blind panic as their secrets threaten to surface.

“The trip spirals into the holiday from hell as Shona is furious to spot David in a close conversation with her love rival.

“Brimming with jealousy and hurt, Shona calls off their engagement.”

This also comes after Natalie kisses David on this week’s Coronation Street, though according to actor Jack P Shepherd he has no interest in cheating with Natalie.

He said: “He’s not attracted to her physically, she’s not his type at all.

“They get on but really he’s only keeping her keen and on-side because Nick has told him to.”

He added that after Shona calls off the engagement: “He’s still trying to convince her that nothing is going on with Natalie.

“She’s convinced they’re having an affair but David’s adamant he can explain.

“When he does come clean Shona’s obviously still not happy that he’s lied and stolen from his gran.

“Okay, he’s not having an affair but he’s still robbed his own family and she’s not sure what’s worse!”

This seems to suggest weeks of romantic drama ahead for David and Shona.

However, ITV viewers will have to tune in to find out whether they will get back together or whether Natalie has another trick up her sleeve to get David.