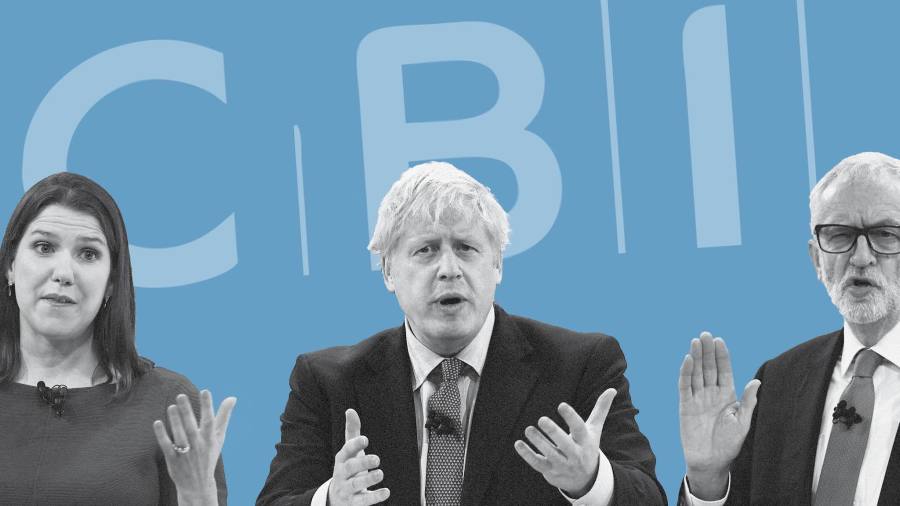 Boris Johnson’s much quoted “f*** business” jibe last year was widely seen as being directed squarely at organisations such as the CBI and the sceptical stance of big business on Brexit.

At its annual conference on Monday, the prime minister insisted that the CBI had “done a fantastic job” — but many business people in the packed audience were far from won over.

The saving grace for Mr Johnson was that even fewer seemed to like what Labour leader Jeremy Corbyn had to say as the pair set out their visions for the future of British business in the run-up to next month’s general election.

Among a range of reforms aimed at boosting smaller businesses, Mr Johnson dropped in an unwelcome surprise by shelving a further proposed cut to corporation tax that would have led to a £6bn giveaway to business.

More concerning for those in the room was the first part of his speech — dedicated to taking the UK out of the EU as soon as possible — which remains deeply unpopular among executives.

But many of those present also admitted, sometimes grudgingly, that the Conservatives would still probably get their vote. Mr Corbyn’s subsequent defence of Labour’s nationalisation programme — now including parts of BT — received a frosty reception.

“The Conservatives feel like the lesser of two evils,” said one FTSE 250 chairman after the speeches. “There is little economic case for Brexit, the flagship Tory policy. But a Corbyn-led government, offering the most radical agenda since 1983, is likely to be a bigger risk to business.”

“After what we heard today, it is difficult to see businesses vote for Labour, particularly after what [Corbyn] said about nationalisation plans,” said Peter Ward, chief executive of the UK Warehousing Association. “But the biggest concern for us is still what kind of Brexit we get, and the timing of its full delivery.”

[Boris Johnson] totally misjudged his audience. People look to him to be serious for the greater good . . . he lost the room with his kooky jokes

Mr Johnson pledged to support business and wealth creation, making commitments to creating a “strong dynamic market economy”, cutting business rates to “above all stimulate the high street, and increasing relief on new buildings and funding for R&D. Even his decision to postpone further cuts to corporation tax was taken without too much complaint.

But some said Mr Johnson’s speech still contained little of real substance. David Hunter, managing director of Antalis, a paper manufacturer, said Mr Johnson came across as “confused and superficial,” adding: “I didn’t want to hear that from my prime minister.” In contrast, even though he did not like what the Labour leader said, it “was crisp and clear and I took away a clear message”.

One delegate, a Tory voter, was even more damning about the prime minister: “He totally misjudged his audience. People look to him to be serious for the greater good . . . he lost the room with his kooky jokes.”

Mr Corbyn struck a conciliatory tone with the CBI, calling on businesses to work with Labour. He rejected claims that he was “anti-business” as nonsense as he held out the promise of ensuring the UK had the best-educated workforce and best infrastructure. He also said that under a Labour Brexit deal the country would retain access to the European single market and customs union.

READ  Equity release: what are the options for older people?

“You and your business have so much to gain from a Labour government,” he said, pledging a reform of business rates and the apprenticeship levy. But some in the audience were left nonplussed by Mr Corbyn’s delivery of his vision, while his policy on nationalisation proved deeply unpopular.

Samantha Mickleburgh, managing director of Duo Bootmakers, said: “I just found Jeremy Corbyn came across as personality-less. There was a real contrast.”

Broader worries were raised about the direction of both parties. Simon Beresford-Wyle, chief executive of Arqiva, the operator of broadcast and mobile towers, said: “I grew up thinking that politicians were there with a sense of duty and purpose to the country. My sense is that now their priorities are self first, factions second, party third and country fourth.”

His words were reflected in a warning from Carolyn Fairbairn, director-general of the CBI, over the factional politics of the right and left. She said the preference for a no-deal Brexit among politicians from the right was driven by an “obsession” with the wholesale deregulation of the UK — something, she said, that no business wanted.

Equally, the “ideology of the left is just as damaging”, she said, pointing to Labour’s nationalisation programme that has “sent a chill through boardrooms at home and abroad”. She added: “Some are thinking are we next?”

The Liberal Democrat’s position on Brexit found favour among delegates. Jo Swinson, leader of the party, told the conference that “if you want to get Brexit done or sorted, then you are not the party for business”. Her promise to “stop Brexit on day one” won her a round of applause.

But John Allan, chairman of Tesco and Barratt Developments, and current president of the CBI, said that no party really had the answer for Brexit yet — which he described as acting as “kryptonite” for UK investment. “The fate of business is more uncertain than ever. Frankly we cannot afford a repeat of 2019, or 2018, or 2017.”

Tourism: can Europe save its summer?

EasyJet to close three bases at Stansted, Southend and Newcastle

Who's the RuPaul's Drag Race All Stars 5 Frontrunner? The Queens Have Some Thoughts