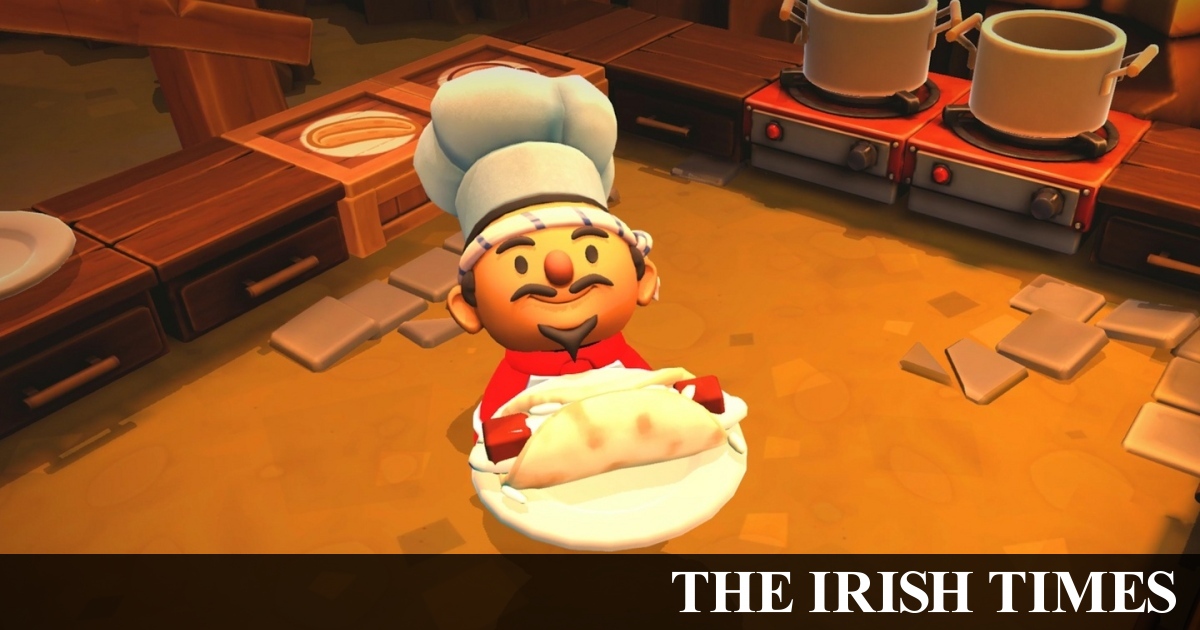 I’m making a pizza. I start by chopping onions with an enormous knife. Then come tomatoes, mushrooms, salami. By the time we get to the olives I’m getting bored. I start to realise that the game I’m playing on my computer may be aimed at someone younger. Finally my pizza sizzles and the cheese bubbles in an exceptionally unrealistic and unappetising way. On the other hand it is all good, clean and non-calorific fun. It’s possibly even educational.

I switch to Papa’s Burgeria, where I have to cook and assemble burgers, and serve salads to an increasingly speedy stream of customers. Why would anyone want to do this I wonder, as I click on not-brilliant images resembling food on my screen. But as the orders pile up, I miss-click on a brown round patty. I can’t find the buns. At the point where I realise my heart rate is up and my pulse pounding, I turn my computer off. Life is stressful enough.

From the cherries in Pac-Man to the mushrooms that make Mario super, food has always featured in gaming. But in the early days, it stayed firmly on the virtual side of reality. Now there are websites and whole cookbooks dedicated to foods from games such as Overwatch, Fallout and The Elder Scrolls. Wanna-be social media influencers dedicate Instagram pages to bringing food from pixels to plate, and people are even committed to playing games – from Red Dead Redemption 2 to Minecraft – as vegans. (How? Eschew the hunks of energy giving meat, and opt for berries instead, while holding off massacring any cartoon animals you may meet).

More than visual art, more than music and film, video games are the most interactive of mediums. They seem to offer the best nexus for fantasy and reality, so it’s no wonder that one will bleed into the other, and vice versa. But where exactly does food fit in?

There’s something about food that makes it seem often more popular in the abstract, than it is in reality. Whether it’s the inexplicable (to me) craze for cooking shows on television, or the shelves of recipe books owned by people who often prefer to eat out, or eat out of the freezer aisle; food-making appears to have entered the realms of art, in that it has become so divorced from purpose. Of course true cooks would argue that it is an art: taking ingredients and combining them with skill and inventiveness to create something new; but food-in-the-abstract has to be about something other than what it appears on the surface to be.

Food in video games also gives you small wins. You may not kill the orc, but you can eat the pie

A survey, a couple of years ago, by British butter brand, Lurpak, found that the average adult spends more time watching food being cooked on TV or online, or reading about it, than they do on cooking food itself. Ironically, while more than half said they’d rather look at food being cooked on TV or at photos online, an excuse for not cooking was that they didn’t have enough time. And while seven-in-10 watched cookery programmes, only half had ever tried to recreate something they’d seen on the screen.

You could argue that, in our weight-obsessed age, you’re absorbing the luscious appeal of food, without the troublesome calories; but that doesn’t explain those who like to settle down with a slimy carbohydrate laden takeaway on a tray, to watch the intricacies of Masterchef. Food on TV is more about attainable fantasy. Yes, you could dust your pomegranates with smoked lime icing sugar, but you may choose not to. There’s also the hint of delicious schadenfreude in seeing those who attempt it frequently failing.

Food in video games is different. Food in video games is about character progression: you need those mushrooms to get your superpowers, crushing those candies gets you to the next level; and it’s also about world-building. There’s no reason that Mario should be eating mushrooms – it could just as easily be magic dust, but we can relate to eating something that appears so ordinary. That’s what adds the spark of fantasy that makes the whole thing fly: the ordinary opens the door that draws you in to the world of the game.

Food in video games also gives you small wins. You may not kill the orc, but you can eat the pie. As it gets more complex, problem solving comes into play – and what is a recipe if not a set of tasks, challenges, problems to be solved? Games such as Overcooked, by Ghost Town Games, are all about problem solving and team work. Instead of killing fantasy creatures, you’re trying to run a busy kitchen, with increasingly tricky obstacles. Co-operation is key and it’s surprisingly addictive – also divisive, having earned it the nickname “Divorce Kitchen” among some couples.

But back in the realms of fantasy land, food lets us get back to our visceral and vicious roots – without the human blood spillage. Go back just a blink of an eye, in evolutionary terms, and we were all out knifing creatures, or clubbing them with blunt instruments, as well as gathering nutritious leaves and berries in order to survive. Contemporary city life doesn’t offer quite so many outlets to reconnect to something that was once so deeply ingrained.

In the real world, food, with all its flourishes and garnishes has gone way beyond survival, but food in the gaming world gives us a route back. The fantasy basis of video games also lets us go on the attack in a more wholesome way. Take Fruit Ninja: available online, or as a virtual reality experience; you get to wield massive swords, hacking huge pineapples, plums and melons to pieces in a pixelated Japanese square. How different is that from the much derided slasher video nasties? Same impulse: different, kinder outlet. No vegetables were harmed in the making of this game.

Flipping it back, the cookbooks that have come out of video games let you live the fantasy. There seems to be a strangely 1970s aesthetic to them: all hunks of glistening meat with knives sticking out of them. Even the unattainable cake of Portal fame, is that 1970s staple, a Black Forest gateau. Whatever the aesthetics of the era, the “official cookbooks” for The Elder Scrolls, Fallout, World of Warcraft et al, let you bring the escapism of the games back into daily life. They also cater to all those for whom conjuring up yet another something to do with chicken brings on a certain malaise.

So you can “immerse yourself in the diverse cuisine of Skyrim […] inspired by food found in the Old Kingdom and across Tamriel.” Taste Apple Cabbage Stew, Sunlight Souffle, Sweetrolls, and more. Or try The World of Warcraft: The Official Cookbook, which “teaches apprentice chefs how to conjure up a menu of food and drink from across the realm of Azeroth”. This one even caters for specific dietary requirements: “The aromatic Spiced Blossom Soup is perfect for plant-loving druids, and orcs will go berserk for the fall-off-the-bone Beer-Basted Boar Ribs.”

Reading the escapist fantasy blurb, I start to wonder if it’s not such a stretch from all the recipe books on my own shelves, conjuring the cuisines of places I may never visit: Ottolenghi’s Jerusalem, Tokyo Cult Recipes, The New Nordic Cuisine of Iceland. And isn’t the whole fine-dining thing – whether it’s molecular gastronomy à la Heston Blumenthal, or Wagyu beef hand fed only by beautiful virgins, served on slates in the starched environs of impossibly stylish emporiums – something that resides firmly in the realms of fantasy too?

Cooking from video games speaks to that very human desire to merge reality and fantasy. To live one sometimes, and enter the other at will, bringing a little of its magic back, to spice up the otherwise everyday.

Hidden cheese in Perfect Dark. There’s a slice on every level: and what does it win you? Nothing but satisfaction. On the other hand, the huge cheeses in Skyrim could mow any opponent down.

The unattainable cake in Portal. Is there a cake? Is the cake a lie? Spawning a raft of memes, and down in the very depths of the game, there may lurk something that looks remarkably like a Black Forest gateau.

Mushrooms in Mario. Helping the mild-mannered plumber to power up, these mushrooms truly are magic.

Nuka-Cola in Fallout. Fallout has many recipes, but this play on Coca-Cola outlasts the apocalypse, with added radiation. Swill at will. You can also “enjoy” iguana on a stick, and other delicacies.

The sliced pan in I am Bread. Of course there’s a whole game dedicated to getting toasted.

The burritos from Overcooked. Sometimes called Divorce Kitchen, but exceptionally addictive, the burrito is one of Overcooked’s more complex challenges.

Feasts from Final Fantasy XV. From lamb chops so realistic they’d make you drool, to massively tall Scooby Snacks, one of the game characters, Ignis has 103 recipes up his sleeve.

Thrillville: Off The Rails Encouraged Me To Share My Love Of Video Games – TheGamer

What is bipolar disorder as Kim Kardashian opens up about husband Kanye West’s mental health?