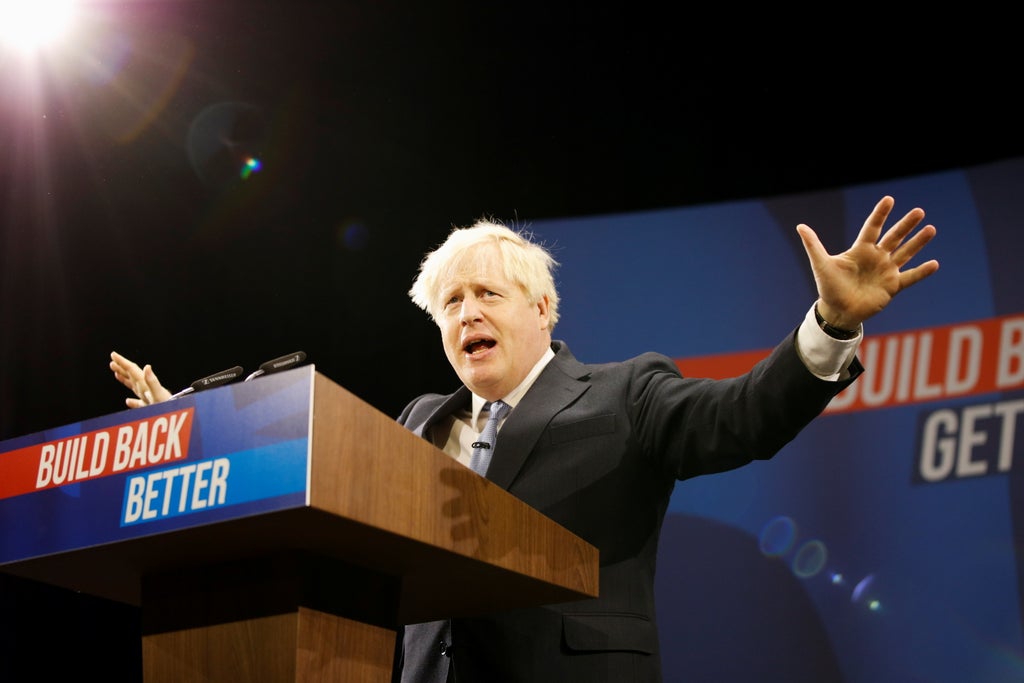 oris Johnson defined his “levelling-up” agenda in his speech to the Tory Party conference today, arguing that by boosting “left behind” parts of the country it will ease pressure on the “overheating” south-east of England.

Mr Johnson also defended his restrictions on foreign workers amid a backdrop of a supply chain crisis and a labour shortage that has seen military drivers drafted in to deliver petrol as well as warnings of empty shelves in shops at Christmas and pigs culled due to a lack of abattoir staff.

He told the party faithful in Manchester that the Government is “embarking now on the change of direction that has been long overdue in the UK economy”.

“The answer is to control immigration, to allow people of talent to come to this country but not to use immigration as an excuse for failure to invest in people, in skills and in the equipment or machinery they need to do their jobs,” he said.

Instead, he promised “the greatest project that any government can embark on” by “uniting and levelling up across the UK”.

Boris Johnson gave his conference speech on the same day the £20 uplift to Universal Credit was axed.

The Government has been warned the policy will plunge 840,000 people into poverty – including almost 300,000 children.

The increase in the UK’s main welfare benefit is being removed from Wednesday, leaving 4.4million households facing a £1,000 fall in their annual income.

Despite a sharp rise in the cost of energy bills and food prices, ministers have rejected repeated calls to make the uplift – introduced at the start of the Covid-19 pandemic – permanent.

Prime Minister vows to “unleash the spirit” of Britain

The Prime Minister vowed to “unleash the spirit” of Britain as he put the Conservatives on a mission to revolutionise the economy.

He injected fresh momentum into his “levelling up” agenda as he seeks to reshape the UK into a “high pay, high skill and high productivity” economy.

‘The spirit of our Olympians’

Mr Johnson ends with a rollcall of Britain’s sporting achievements over the last year.

“The spirit of the footballers who took England into the final of a major knock out tournament for the first time in the lives of the vast majority of the people of this country,” he says.

“The indomitable spirit of Emma Raducanu. Her grace and her mental resilience when the game was going against her.

“Because that is what counts. The spirit of our Olympians….

“Not only the achievement of those elite athletes but a country that is proud to be a trailblazer to judge people not by where they come from, but by their spirit. What is inside them.

“And that is the spirit we are going to unleash.”

The PM is addresses so-called cancel culture and ‘wokeness’.

“When they began to attack Churchill as a racist I was minded to ignore them,” he says.

“It is only 20 years ago since BBC audiences overwhelmingly voted him the greatest Briton of all time, because he helped defeat a regime that was defined by one of the most vicious racisms the world has ever seen.

“But as time has gone by it has become evident that this isn’t just a joke. They really do want to re-write our national story – starting with Hereward the woke

“We really are at risk of a cancel culture know nothing iconoclasm. and so we Conservatives will defend our history and cultural inheritance.”

A speech section on criticising the Labour party get a predictably large laugh from the conference audience.

“Did you see them last week,” he says about the Labour conference. “Hopelessly divided.

“Their leader like a seriously rattled bus conductor pushed this way and that by a corbynista mob of sellotape-spectacled sans-culottes.

“Or the skipper of a cruise liner that has been captured by Somali pirates desperately trying to negotiate a change of course and then changing his mind.”

“The world’s most effective vaccines have saved our open society and our free market economy.”

East London school Brampton Manor gets a mention as Mr Johnson continues to talk about levelling up the country.

But London politicians have worried levelling up the UK could be mean ‘levelling down’ the capital.

“When I became leader of this party there were only 7 per cent of households that had gigabit broadband,” says Mr Johnson

“By the new year that will be up to 68 per cent. Thanks to Rishi’s superdeduction the pace is now accelerating massively.

“As companies thrust the fibre-optic vermicelli in the most hard to reach places.”