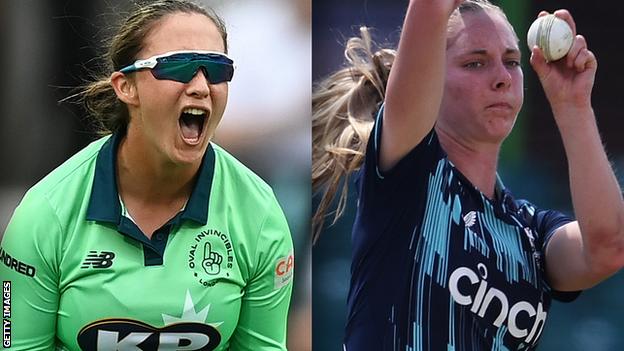 England have called up teenagers Alice Capsey and Freya Kemp for the first time as part of their Commonwealth Games squad.

The T20 competition will take place at Edgbaston from 29 July-7 August.

Issy Wong has also been included in England’s 15-player squad having made an impressive start to the international home summer.

It is the first time women’s cricket has been part of the Commonwealth Games, with the men previously contesting a 50-over competition in 1998.

“When you’re watching these multi-sport events as a cricketer, you don’t imagine you’ll be out there representing Team England,” captain Heather Knight said.

“It’s a hugely exciting squad and for us as a group to have a chance to make history and be the first women’s cricketers to medal at the Commonwealth Games is something that can really drive us forward.”

England won the inaugural edition of the T20 World Cup on home soil in 2009.

They have been runners-up in three of the past five editions, with Australia having dominated women’s cricket in recent years.

“We’ve got one eye on taking our T20 game forward, but we do believe this squad gives us the best chance of success in the Commonwealth Games,” head coach Lisa Keightley said.

“T20 cricket and women’s cricket in general is evolving all the time – and in order to put ourselves in a position to win global tournaments we have to move forward with it.

“We have selected players who are flexible, adaptable, fit in a number of roles and give us the most options.”

England open their campaign against Sri Lanka on 30 July.