College students who get at least seven hours of sleep every night have better grades, a new study suggests.

Researchers found that getting six-and-a-half hours of sleep every night resulted in grades that were 50 percent lower than students who averaged just one more hour of shut-eye each night.

However, there is a cutoff time. Students who went to bed after 2am performed worse on tests, even if they got seven hours of sleep.

The team, from the Massachusetts Institute of Technology (MIT) says the findings add further evidence to why lack of sleep is harmful and how important it is to stress the value of sleep for their success to students. 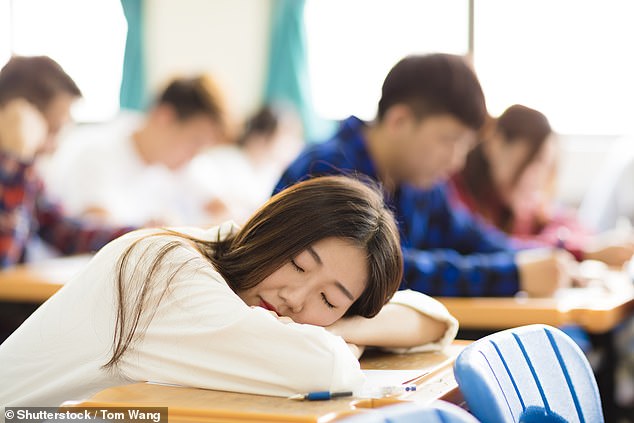 A new study from the Massachusetts Institute of Technology found that college students who went to bed at 2am, even if they got seven hours of sleep, performed worse on exams (file image)

The study, published in the journal Science of Learning, originally began as research on whether or not there was a correlation between physical exercise and academic performance.

All of the students in a chemistry class at MIT wore Fitbits and one-fourth of them were enrolled in an intense fitness class.

‘What we found at the end of the day was zero correlation with fitness, which I must say was disappointing since I believed, and still believe, there is a tremendous positive impact of exercise on cognitive performance,’ said co-author Dr Jeffrey Grossman, a professor of materials science and engineering at MIT.

READ  Getting good at waiting: 'You want something that challenges you, but not too much'

The Fitbits did, however, also track sleep and the correlation between shut-eye and academic performance was clear.

Researchers found that students who got at least seven hours of sleep got the best grades on the 11 quizzes, three midterms and final exam of their class.

Students who averaged six-and-a-half hours of sleep had overall grades that were 50 percent lower than students who got just one hour more sleep every night.

Dr Grossman said the association between sleep and grades wasn’t surprising, but the extent of it was.

While he says there may have been other factors that affected grades, the findings show that sleep ‘really, really matters.’

The Centers for Disease Control and Prevention has advised the same thing, leading to California Governor Jerry Brown signing a bill into law that bans the state’s public middle and high schools from starting before 8.30am.

The study found that there was a cutoff time of 2am, after which students performed poorly.

‘If you get a certain amount of sleep…as long as it’s before certain times, say you go to bed at 10 or at 12 or at 1, your performance is the same,’ said Dr Grossman.

‘But if you go to bed after 2, your performance starts to go down even if you get the same seven hours. So, quantity isn’t everything.’

Additionally, students who got the recommended seven of shut-eye the day before a test did not have better scores than those who didn’t.

‘It turns out this does not correlate at all with test performance. Instead, it’s the sleep you get during the days when learning is happening that matter most.’

The findings also provided an explanation for why female students consistently got better grades than male students: better sleep habits.

Robert Stickgold, a professor of psychiatry at Harvard Medical School, who was not involved with this study, told MIT News that while the results are convincing, he warned that correlation doesn’t necessarily mean causation.

How your HEIGHT could double your risk of catching coronavirus, scientists discover

‘Serious money’ needed to transform Britain into a nation of cyclists, say campaigners

The Brazilian Soccer Player Who Overcame Messi, then Became an Esports Pro