She’s been soaking up the glorious Caribbean sunshine over the past few days, after making her yet another repeat visit to the popular island Barbados.

And Coleen Rooney, 34, appeared to be in her element on Friday morning, when she was spotted enjoying some beach time with her family as she donned a burgundy swimsuit, which featured frilly red detailing on the straps.

The star, who is holidaying on the island with her footballer husband Wayne Rooney, 34, and their four sons Kai, 10, Klay, seven, Kit, four, and Cass, two, and her parents – wowed as she sauntered along the golden shores.

The WAG and the Derby County captain were seen enjoying the day out with their little ones and her parents Colette and Tony McLoughlin.

Coleen is in the midst of a £1 million court battle with Becky, 38, who revealed in court documents last week her ‘extreme anguish’ about being exposed ‘to public ridicule and contempt’ by her in the so-called Wagatha Christie case.

She pulled her brunette locks back into a loose ponytail and shielded her eyes with a pair of chic shades, while she used a natural palette of make-up for the occasion.

Wayne opted not to head out to sea as he instead relaxed on a sun lounger, drank a beer and ate some food while he relaxed with Colette and his sons. 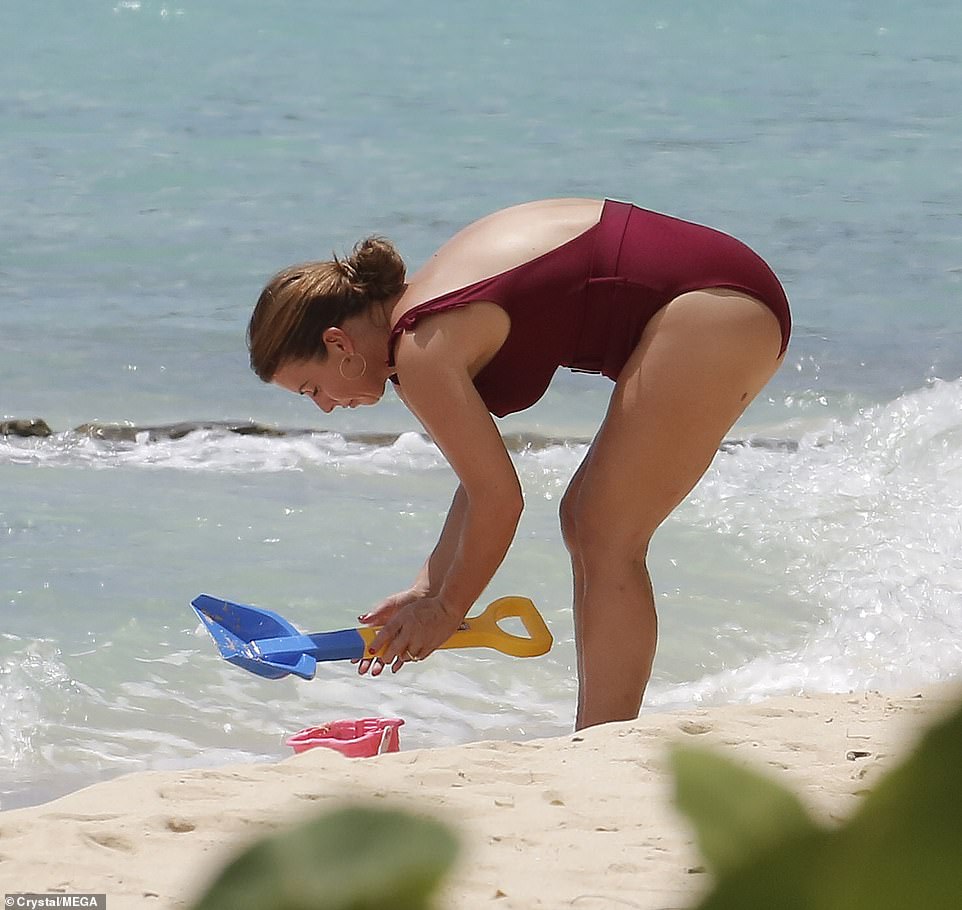 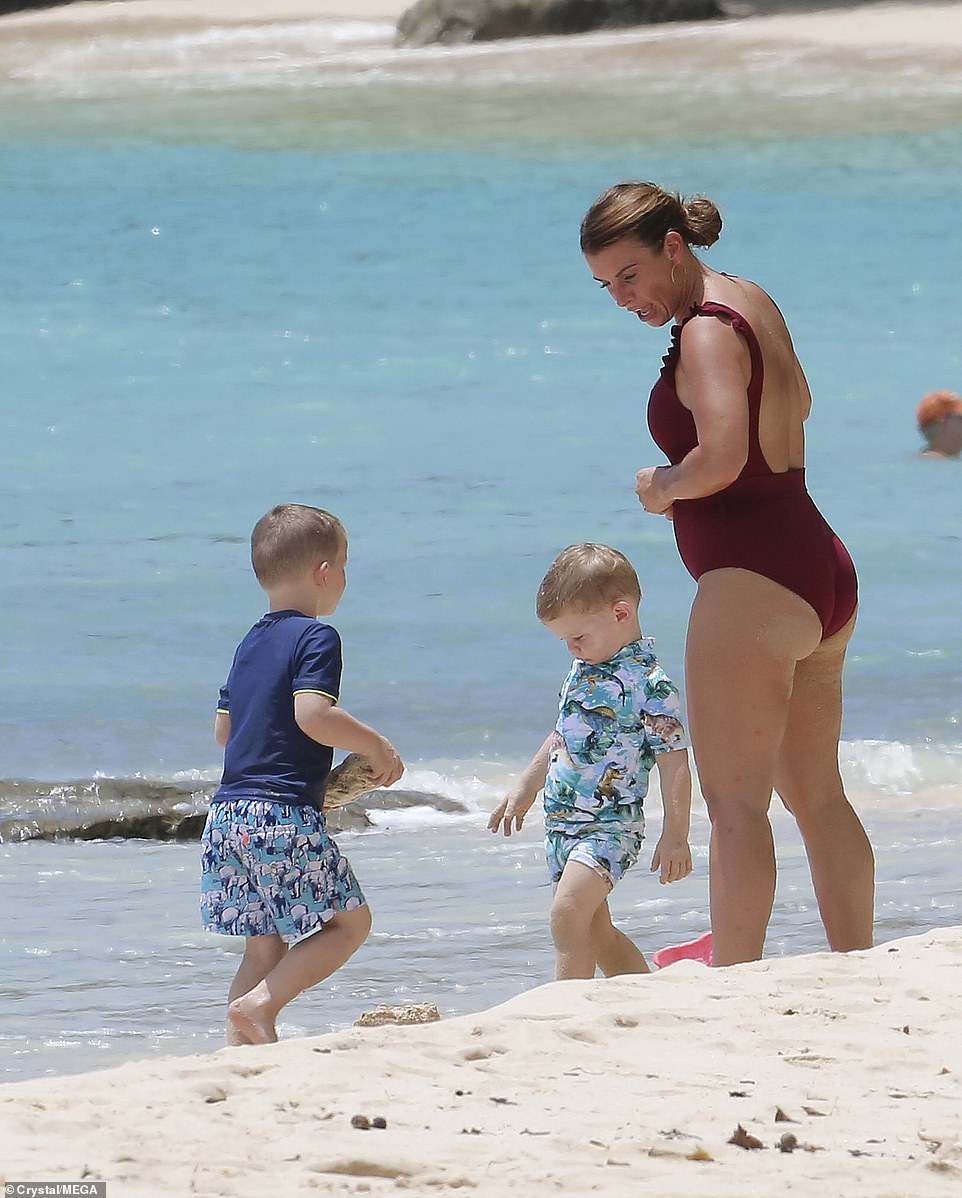 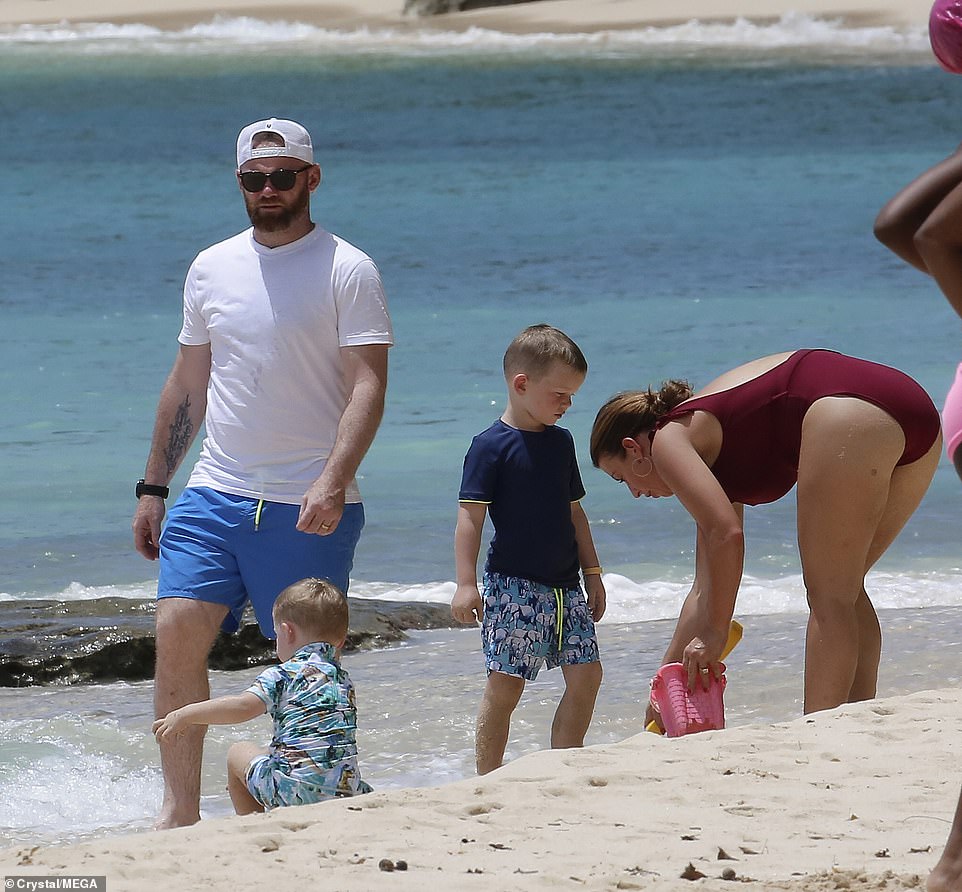 He kept things casual by wearing a white T-shirt over a pair of blue shorts, while he covered his locks with a baseball cap for a low-key look.

Friends say the former England football captain has hoped Coleen’s WAG war would not get to his stage but he is willing to back his wife in her quest to prove her claims and be vindicated.

A source said to The Sun: ‘Wayne thinks it’s gone too far already and dreads the thought of it reaching court. 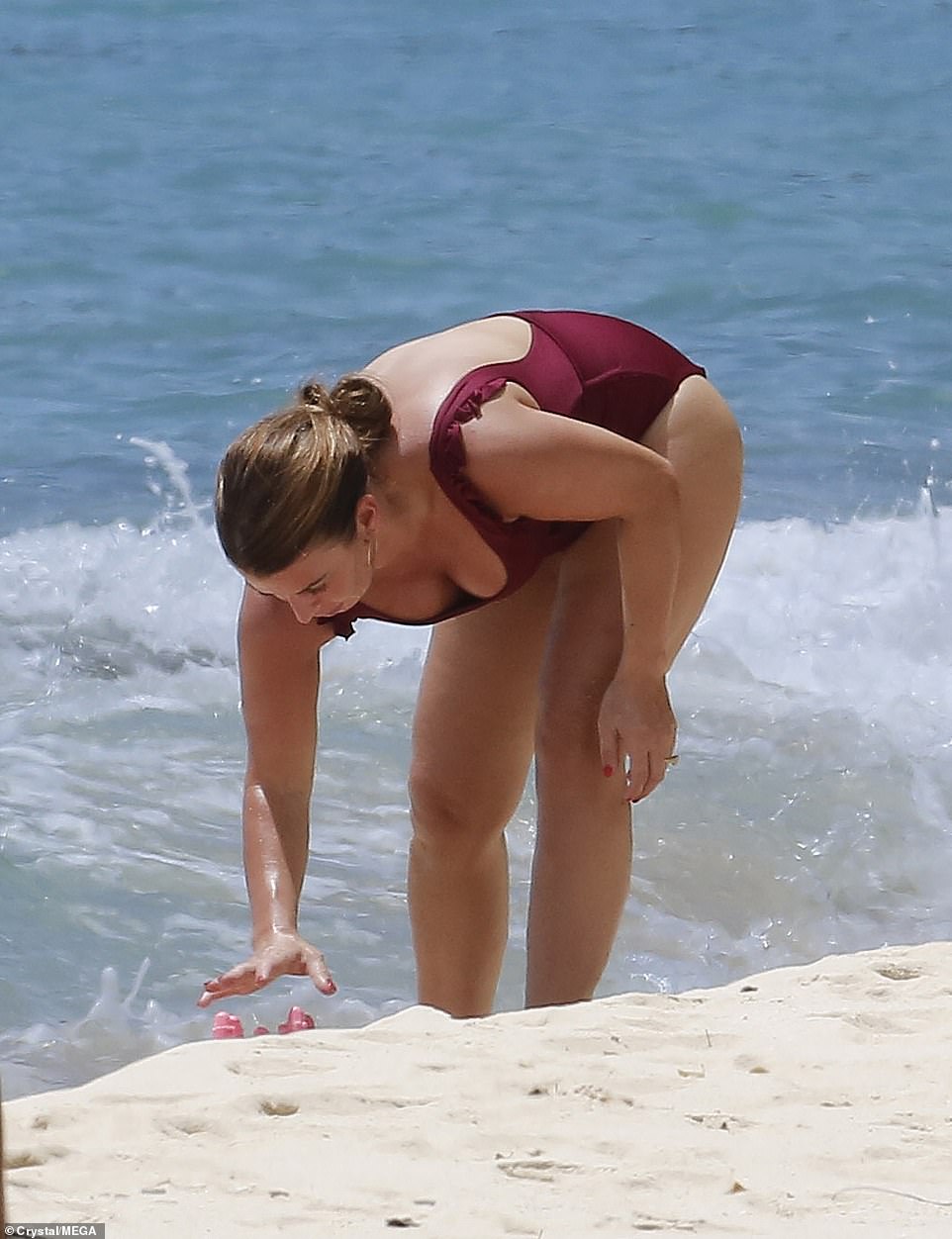 ‘He fears it could be embarrassing to him and their family what may come out. But he knows how important this is to Coleen and will back her.’

Another source said: ‘Coleen is becoming obsessed with it.’

MailOnline contacted Coleen and Wayne Rooney’s representatives for comment at the time of publication.

The holiday was no doubt needed for Coleen, who was accused of leaking stories to the press by Rebekah earlier this month.

Rebekah – who is the wife of Leicester City striker Jamie Vardy, 33 – told in a bombshell legal document how she had been left suicidal by the accusation that she had leaked stories about Coleen and her family.

She also claims in the document drawn up for her libel battle against Coleen that the stress of the scandal had left her fearful of losing her unborn baby and suffering panic attacks that made her too scared to leave her home.

The I’m A Celeb star complains of being made a ‘scapegoat’ by her rival seeking to blame her for stories appearing when in the past Coleen had approved of her friends leaking gossip about her.

The document says Rebekah believes she ‘has deliberately been made a scapegoat (sic) by the Defendant (Coleen) for past ‘leaked’ stories.’

It points to previous stories about Coleen and Wayne with some ‘in particular about their marriage, which have in fact come from the Defendant’s friends, at times even with the Defendant’s approval.’

The paper states that Sun journalist Dan Wootton had said on talkRADIO on October 19 last year that Coleen had ‘manipulated the media to tell stories about her own life’.

Wootton added that he had ‘written many, many stories’ about her marriage and ‘lots of other things around the Rooneys’ that had come directly from friends of Coleen including some told ‘with her (Coleen’s) approval’, says the document

He went on to say on talkRADIO that nothing had ever come from ‘any of the Vardys’, it adds.

Rebekah describes in her document how Coleen’s public denunciation of her on Instagram while she was seven months pregnant had ‘gravely injured her reputation’.

Detailing how Coleen had ’caused her enormous distress and very extreme embarrassment’, she disclosed how she had been bombarded with abuse on social media.

Rebekah said that the widespread damage to her reputation was illustrated by research showing her name had become a more popular search term than ‘Brexit’ on Google in the UK on the day the scandal broke.

She also claimed that it led to her name appearing 276,822 times on Twitter on the same day, more than triple the number of mentions of Boris Johnson who had had his name published only 80,704 times.

Coleen made headlines around the world last October when she made her devastating claim that Rebekah had been leaking stories about her and her family to the Sun newspaper.

She released the statement: ‘It’s been tough keeping it to myself and not making any comment at all, especially when the stories have been leaked, however I had to. Now I know for certain which account / individual it’s come from.

‘I have saved and screenshotted all the original stories which clearly show just one person has viewed them. It’s ……………. Rebekah Vardy’s account.’

Rebekah immediately denied the claims and has since been fighting to clear her name and demands Coleen withdraw the claims against her. 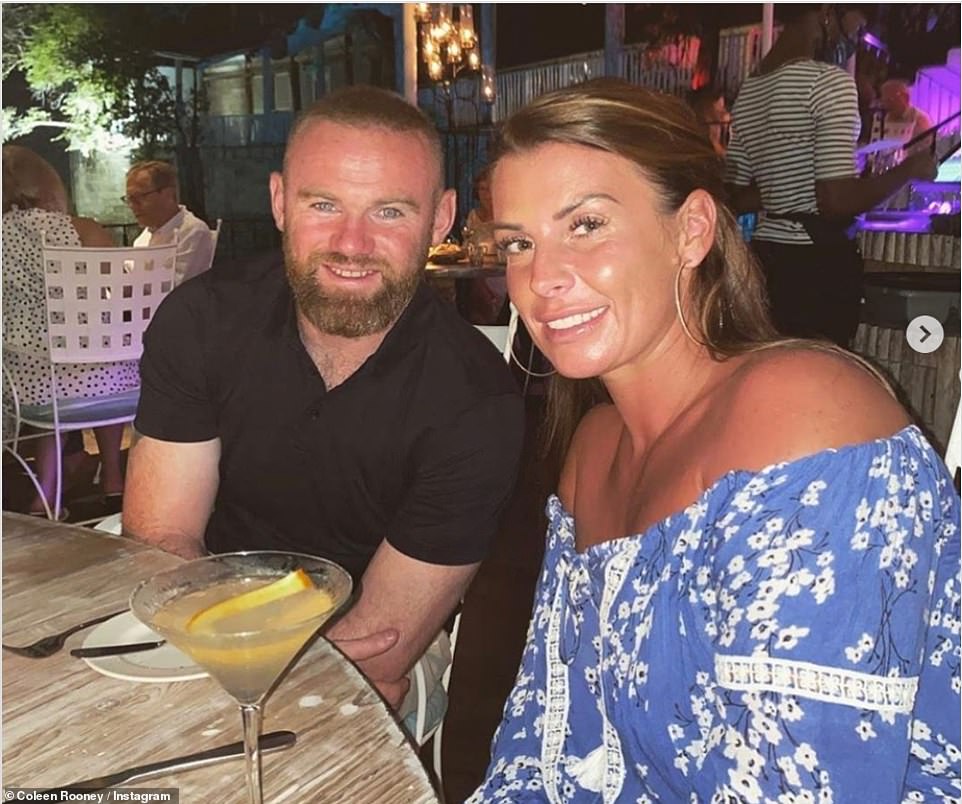 Date night: Coleen shared a sweet snap with Wayne during their dinner with fans via Instagram 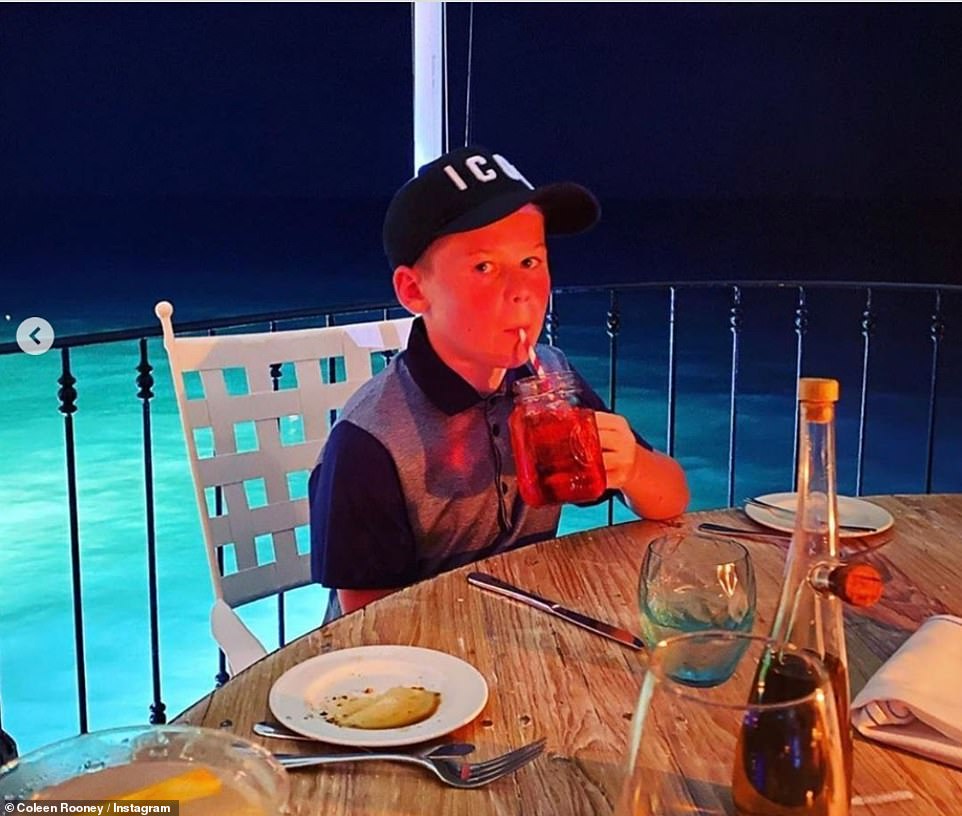 Looking cool: Kai donned a baseball cap for their evening meal and sipped on a refreshing drink