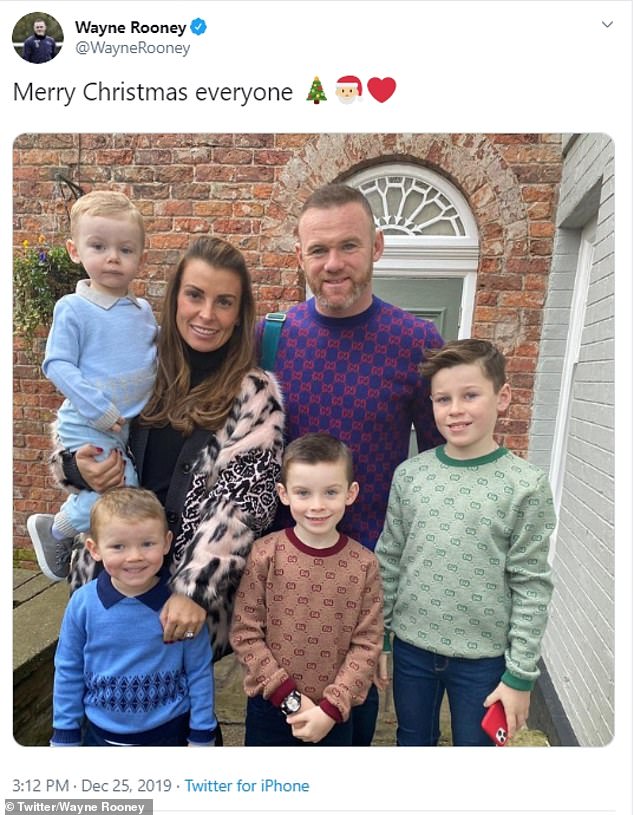 She treated her children to an idyllic festive holiday to Lapland earlier in the week.

And Coleen Rooney and her husband Wayne kept the good times rolling as they posed with their sons Kai, 10; Klay, six, three-year-old Kit and Cass, 22 months, for a wholesome Christmas snap on Wednesday.

The WAG, 33 – who celebrated 11 turbulent years of marriage with Wayne, 34, in June – surprised their children with new pets; Pip the Pomeranian and Harry the Hamster, for the festive celebration.

The long-term couple appeared in great spirits in an image uploaded to Wayne’s Twitter account, alongside the caption: ‘Merry Christmas everyone’.

In another adorable photo, Kit stood out in a red superhero costume while his three brothers coordinated in personalised pyjamas as they cradled their new pets.

A delighted Coleen expressed her well wishes towards her social media followers as she captioned the picture: ‘Sending you all lots of love this Christmas. Have the most special time with your loved ones.

‘We woke up to 2 new additions to the family this morning, Pip the Pom and Harry the Hamster.’ 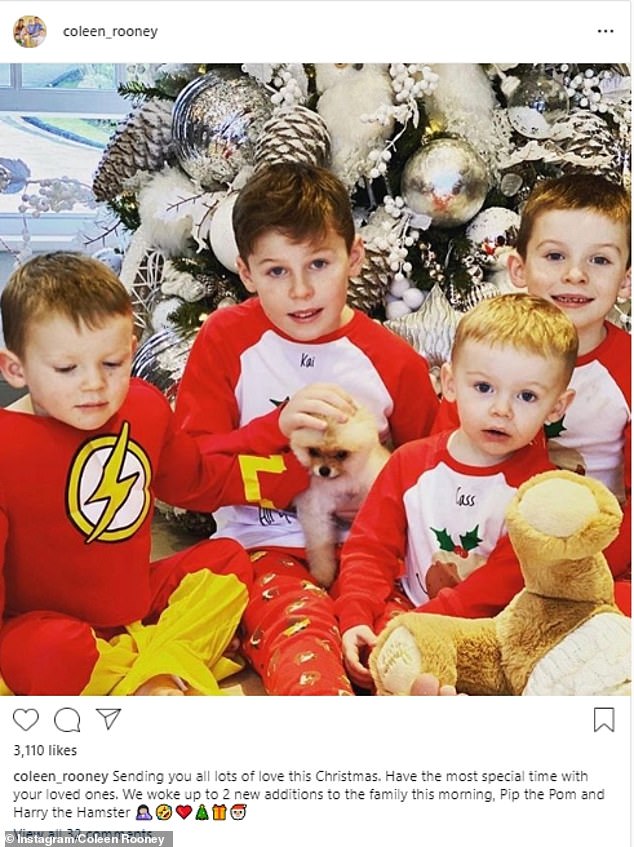 New addition: The WAG, 33, and the footballer, 34, surprised their children with a new dog and hamster for the festive season 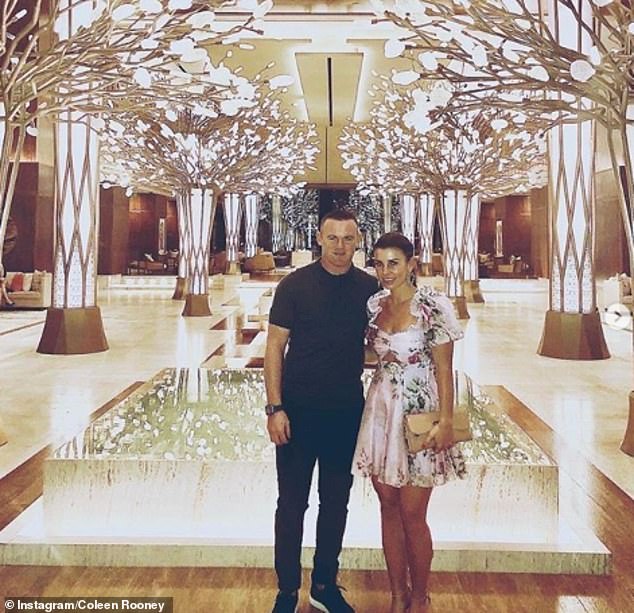 Coleen has been ringing in the final month of the year with her loved ones, after a tumultuous year with the sportsman.

READ  Doctor Who: Which New Doctors Are Now Canon?

The childhood sweethearts met at school when they were 12, before they started dating after they finished education at 16.

Earlier this year, their marriage was said to be ‘hanging by a thread’ after the sportsman was spotted drinking with barmaid Vicki Rosiek until 2.30am.

The January incident came just weeks after he was arrested for being drunk at an airport in Washington DC.

The former Everton striker also faced court appearance for drink-driving in 2017. He was arrested for driving party girl Laura Simpson, 30, in her VW Beetle in Cheshire while three times over the limit.

He was handed a two-year driving ban and 100 hours of unpaid community work, apologising for an ‘unforgiveable lack of judgement’.

Their family temporarily moved to Washington after a turbulent time in their marriage, yet Coleen confessed they are rebuilding their romance with date nights, including regular cosy trips to the cinema as just the pair of them.

Sources revealed details of their determined efforts: ‘Coleen is adamant Wayne can change his ways and she is helping him get out of the hole he’d fallen into. This holiday marks a fresh start and things are going well… 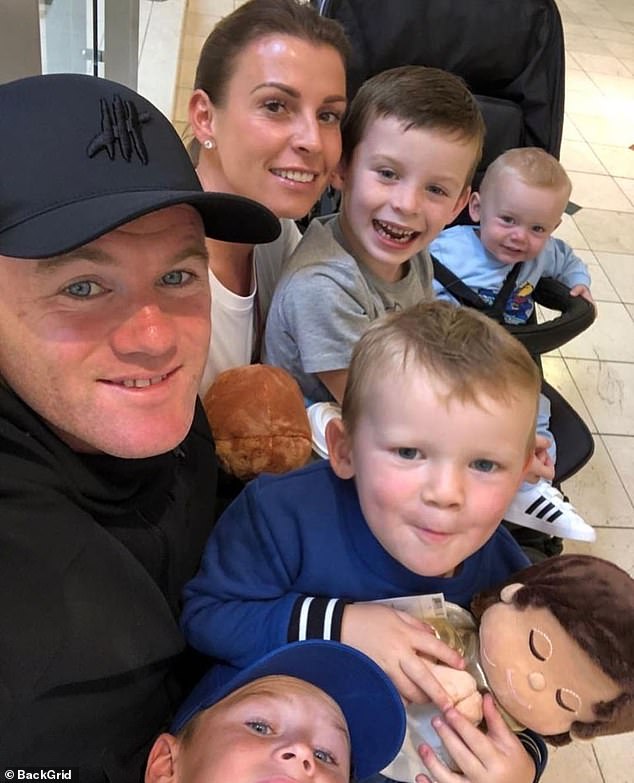 We are family: Coleen has been ringing in the final month of the year with her loved ones, after a tumultuous year with the sportsman (pictured earlier this year)

‘First to go was his video gaming obsession and Coleen is demanding he spend more time with the family at home, rather than in a different room staring at a screen. She is desperate for Wayne to end his childish antics and start growing up…

‘Now she wants family dinners at home for them to connect and is making sure she sets aside time to spend with Wayne alone.’

In October, pregnant Rebekah Vardy was explosively accused by Coleen of leaking stories about her to The Sun newspaper, which Rebekah fiercely denied – leading to the WAG war which has captivated the nation.

At the time, it was revealed by sources close to Rebekah that leading law firm Kingsley Napley has sent Coleen a letter on her behalf demanding she provides them with the evidence she has against Becky so that she can complete her investigation. 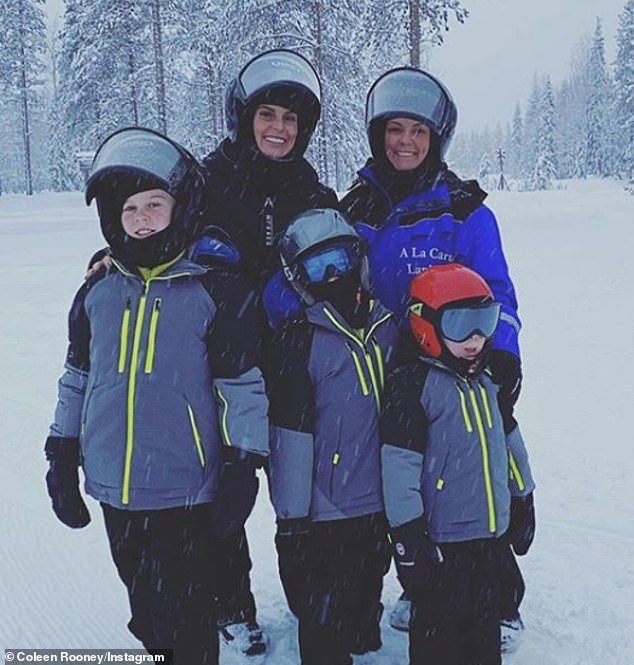 Living in the Lap(land) of luxury: The socialite treated her children to an idyllic festive holiday to Lapland earlier in the week

Coleen was given the nickname ‘Wagatha Christie’ when it was revealed that she had been leaking fake stories on her private Instagram to see who was passing the information to the press.

She wrote on October 9: ‘For a few years now someone who I trusted to follow me on my personal Instagram account has been consistently informing The Sun newspaper of my private posts and stories.

‘There has been so much information given to them about me, my friends and my family – all without my permission or knowledge. 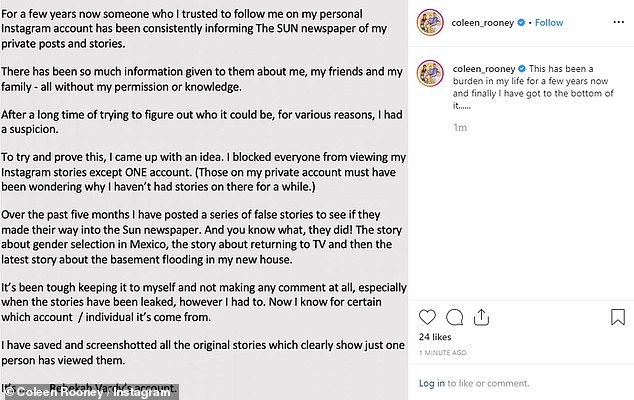 The statement: In October, pregnant Rebekah Vardy was explosively accused by Coleen of leaking stories about her to The Sun newspaper

‘After a long time of trying to figure out who it could be, for various reasons, I had a suspicion. To try and prove this, I came up with an idea, I blocked everyone from viewing Instagram except ONE account.

‘It’s been tough keeping it to myself and not making any comment at all, especially when the stories have been leaked, however I had to. Now I know for certain which account/individual it’s come from.

She signed out with the message: ‘This has been a burden in my life for a few years now and finally I have got to the bottom of it……’ 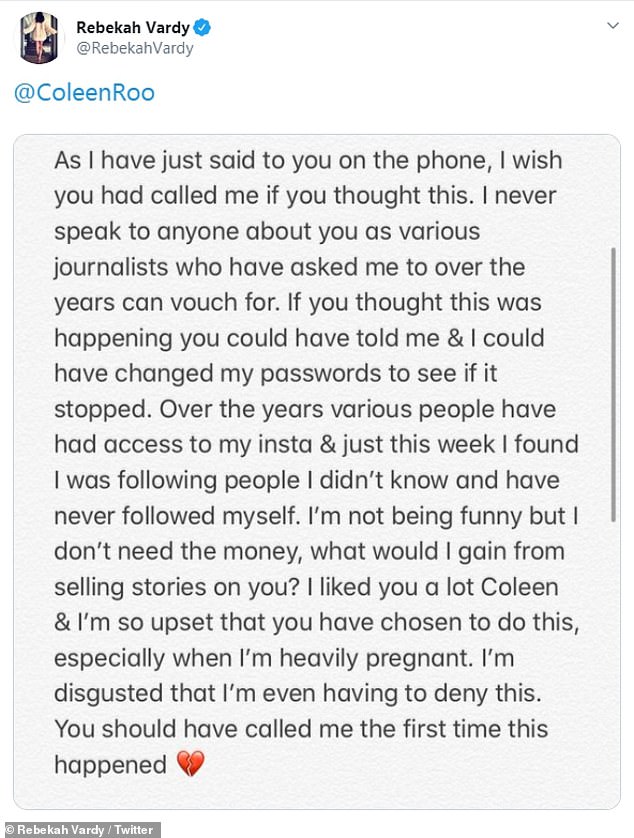 ‘I don’t need the money’: Rebekah denied all accusations against her minutes after the post and said she had nothing to gain and had no financial motivation 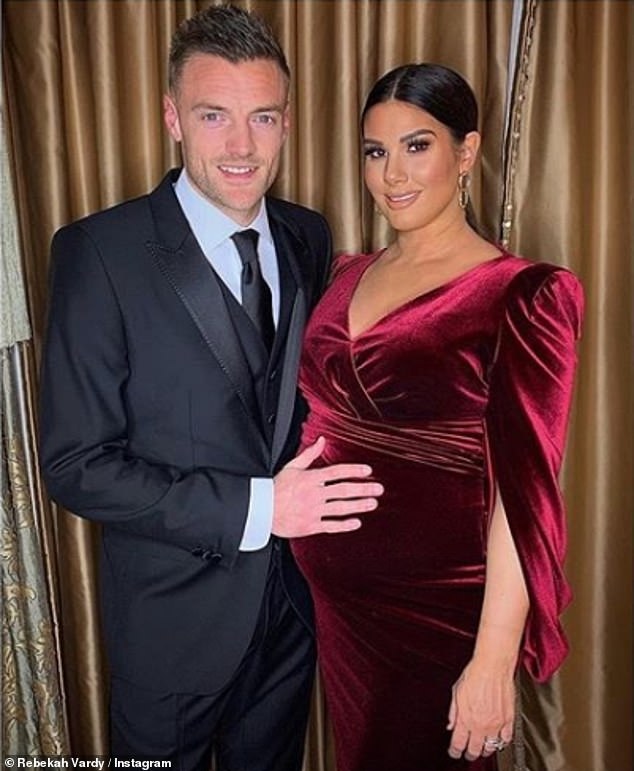 Cosying up: Fellow Wag Rebekah is set to welcome her fifth child into the world (pictured with husband Jamie earlier this month)