Christine McGuinness and Paddy McGuinness are said to have broken up in June before announcing they’d decided to end their marriage, it has been reported.

On Friday, the couple confirmed that they had made the decision to separate after being married for 11 years.

In a joint statement, they explained that they hadn’t planned on sharing the news publicly until they were ‘ready’, but were left feeling as though they had ‘no other option but to clarify’ due to the ‘lack of privacy’ surrounding their personal lives.

The pair outlined that their separation occurred ‘a while ago’, with their main focus being on ‘loving and supporting’ their three children, twins Penelope and Leo, born in 2013, and Felicity, born in 2016.

According to a source, Christine, 34, and Paddy, 48, ‘spent weeks of hiding’ their split, with The Sun claiming that they broke up in June.

They alleged that Christine ‘couldn’t keep it up’ and was ‘in the driving seat’ of the decision.

‘Christine and Paddy ended their marriage early in June. She made it very clear to those close to her that it was over. Paddy, however, wanted to put on a united front,’ they reportedly told the publication.

‘He wanted to control the narrative and Christine felt like she had no option but to go along with it. But in the last week she said they couldn’t carry on and pushed for them to go public. She has had enough of putting on a brave face.’

In the statement released by the McGuinness, they stressed that they still have a ‘great relationship’ as they continue to live in their family home together.

‘This was not an easy decision to make but we’re moving forward as the best parents we can be for our three beautiful children,’ they said.

‘We’ll always be a loving family, we still have a great relationship and still live happily in our family home together. We hope this now draws a line under anymore unwanted and unnecessary intrusion into our private life.’

They added that although they ‘work in the public eye’, they have requested that people respect their ‘wishes for privacy’, and said that they would not be making any further comment.

The Top Gear host met Christine when she was modelling in a fashion show at the Liverpool Tennis Tournament, before they married in Thornton Manor in the Wirral in 2011.

Christine recently opened up about the marriage issues she and Paddy were facing, with the pair sharing photos from a family holiday this week.

Speaking to The Sun, Christine said: ‘It’s just – we’ve been together 15 years, 11 years married: we are gonna have ups and downs – but this situation at the minute – I don’t want to go into it too much but I will just say that I didn’t cause this situation.’


MORE : Christine and Paddy McGuinness’ relationship history as they split after 11 years of marriage


MORE : Christine and Paddy McGuinness beam on loved-up holiday before confirming split after 11 years of marriage 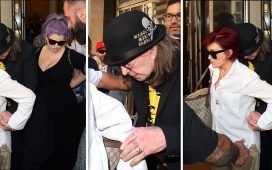