She is newly single and hitting up the Brooks Brothers Holiday Party solo.

Christina Hendricks didn’t need a man by her side (or her ex Geoffrey Arend) as she kicked off the holiday season by heading off to a jolly event.

The 44-year-old actress looked elegant in a simple brown suit while mingling at the party on Saturday evening. 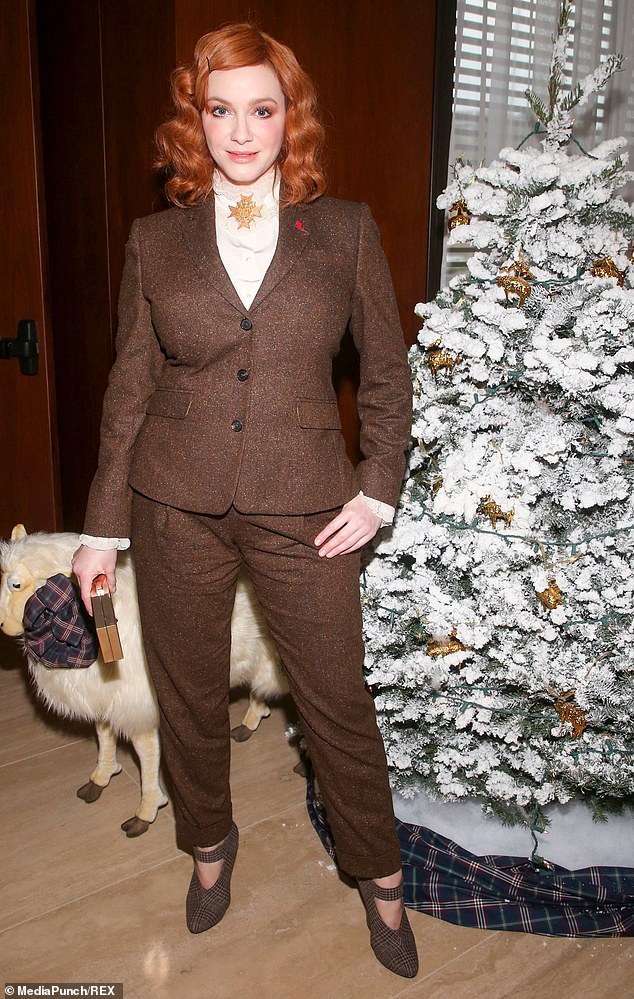 Happy holidays: Christina Hendricks doesn’t need a man by her side (or her ex Geoffrey Arend) as she kicks off the holiday season by heading off to a jolly event

Her suit was a dark brown with three black buttons down the middle.

Underneath she wore a white button up that had a high lace-detailed neckline. She pulled the look together with a pair of brown close-toed high heels.

Christina did however, bring a pop of color to the look with her subtle eye look and blush. 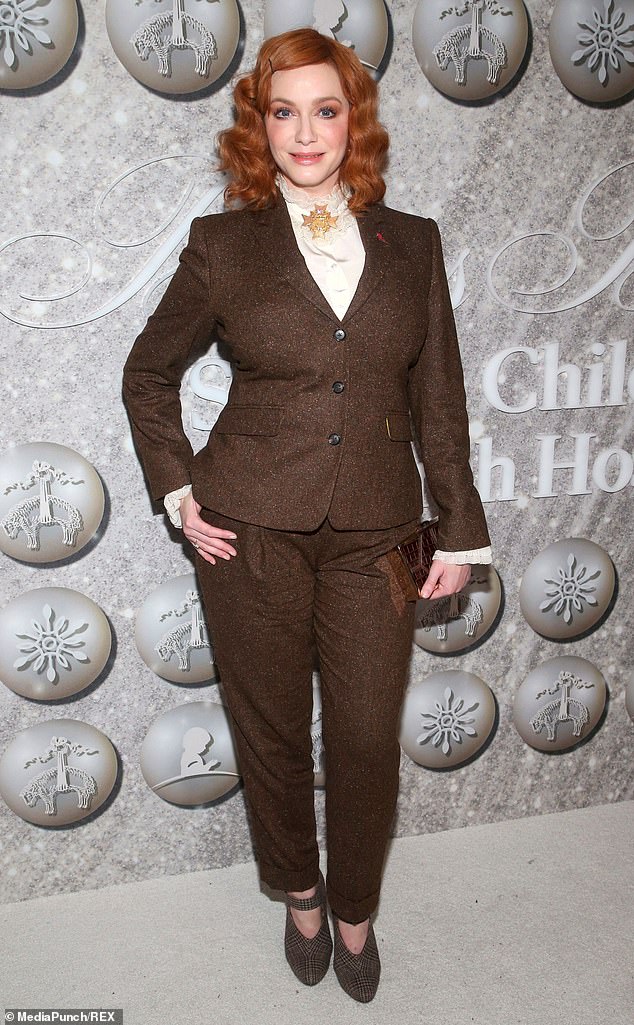 Outfit details: Underneath she wore a white button up that had a high lace-detailed neckline. She pulled the look together with a pair of brown close-toed high heels

Recently, it was announced that Christina and Geoffrey Arend would be separating after 12 years together.

The two announced their split via Instagram back in October that said: ‘Twelve years ago we fell in love and became partners. We joined our two amazing families, had countless laughs, made wonderful friends and were blessed with incredible opportunities.’

‘Today we take our next step together, but on separate paths.’ 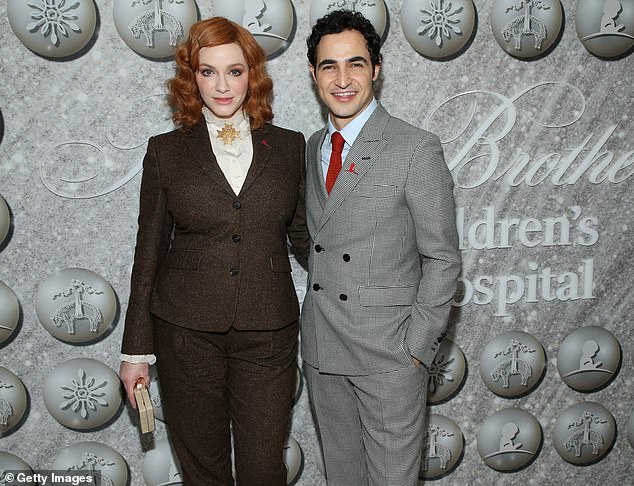 Hanging out: Christina and Zac pose for a few photos as Zac continues to mingle with other guests on the carpet 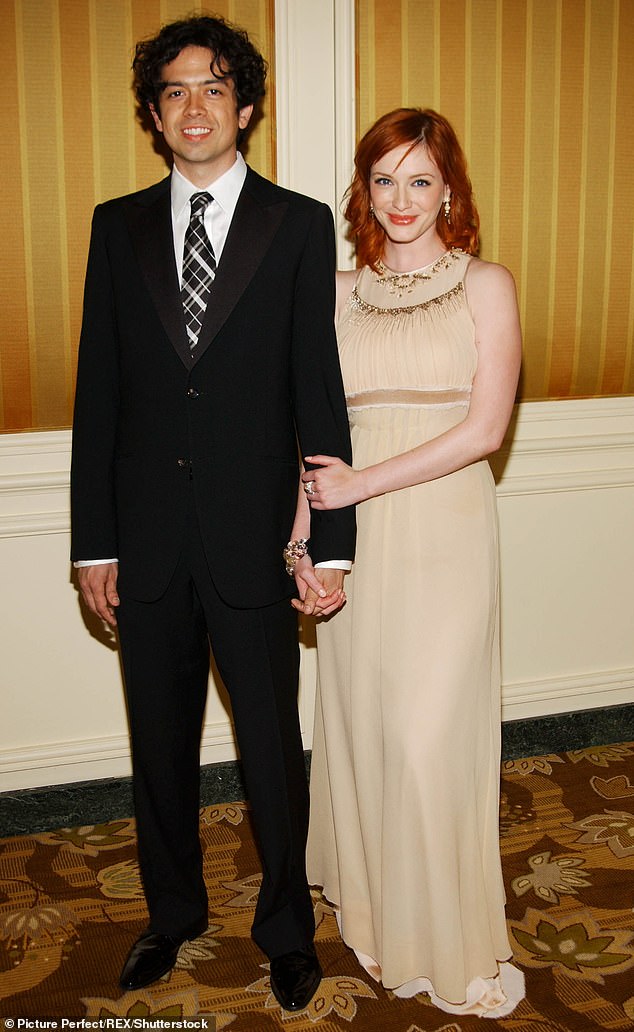 Back then: Geoffrey Arend and Christina smile together back in 2008 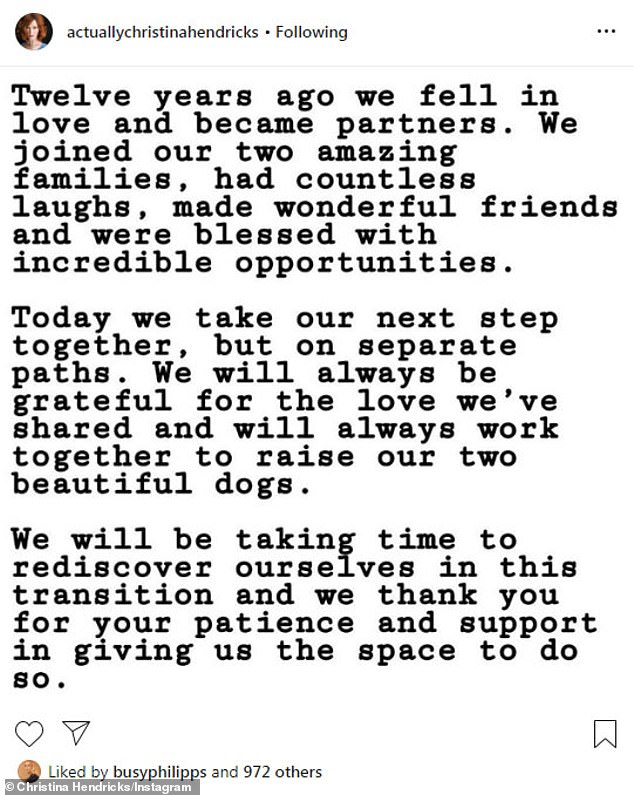 Their statement: The couple released a joint statement on Instagram announcing their separation

The statement went on to continue they would be ‘taking time to rediscover ourselves in this transition and we thank you for your patience and support in giving us the space to do so.’

The pair also revealed they will remain close to ‘raise our two beautiful dogs.’

Following their split, they listed their Midtown Manhattan apartment for $1.25 million dollars. 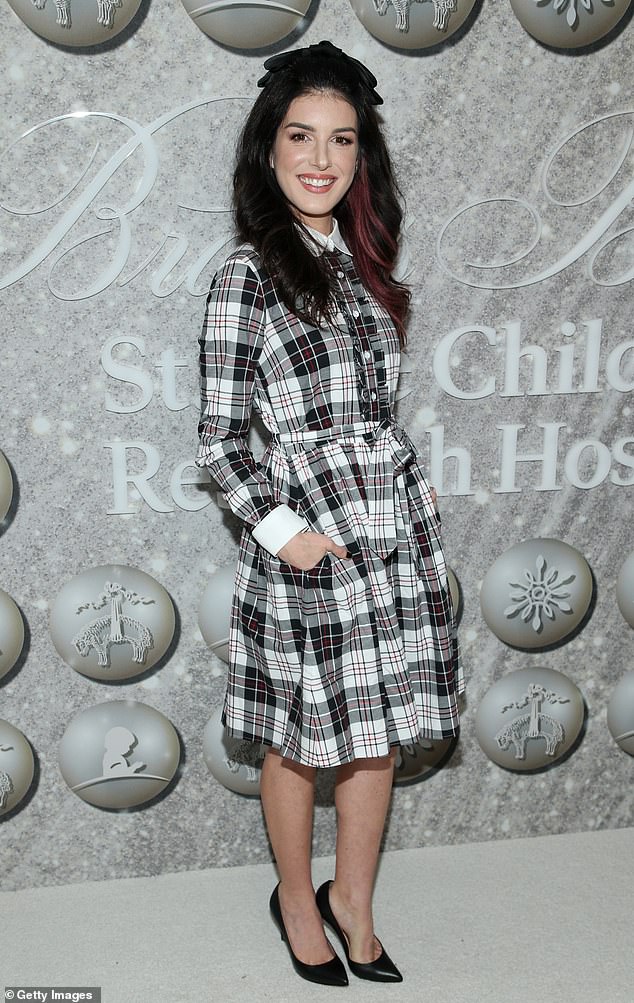 Festive: Shenae Grimes-Beech looked festive in a plaid dress for the event 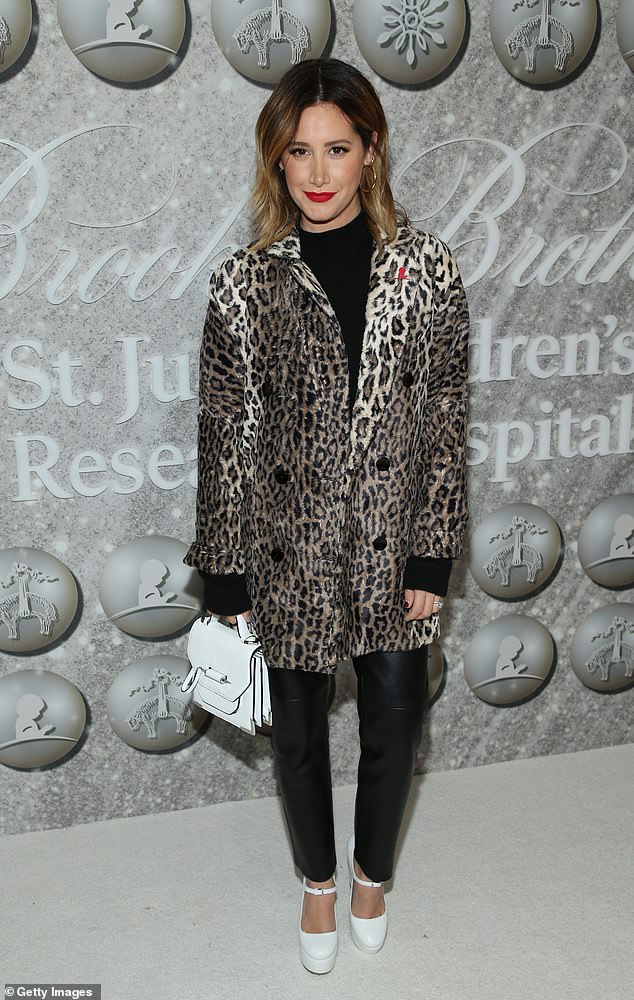 Merry Happy Whatever: The star of the new holiday Netflix series Ashley Tisdale showed up in a snazzy evening look 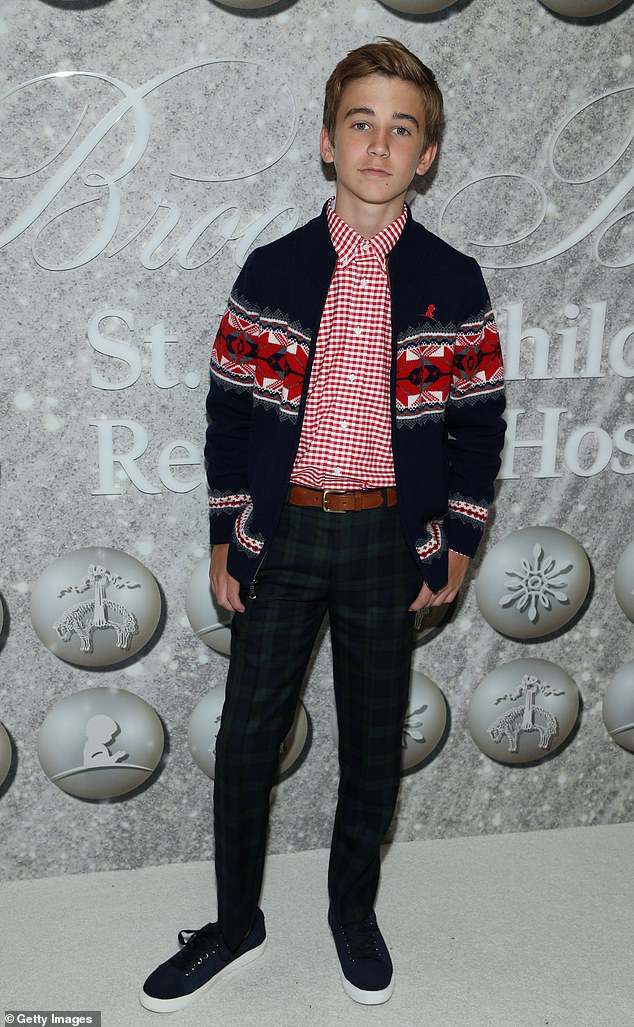 This Is Us: Parker Bates who stars in This Is Us showed off his plaid pants and holiday sweater for the event 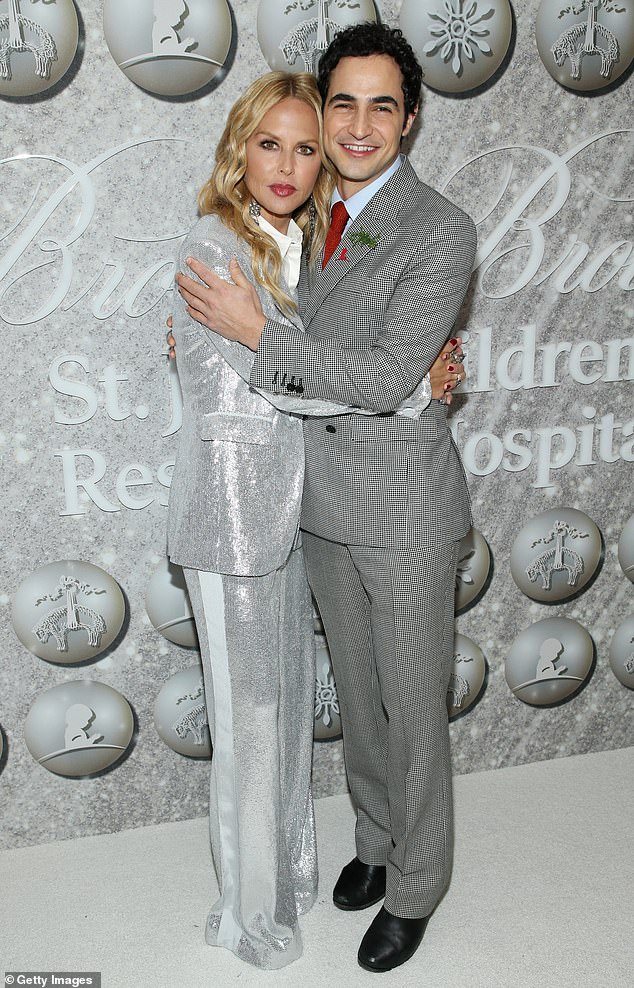 Fun times: Rachel Zoe and Zac Posen pose together in their stylish suits 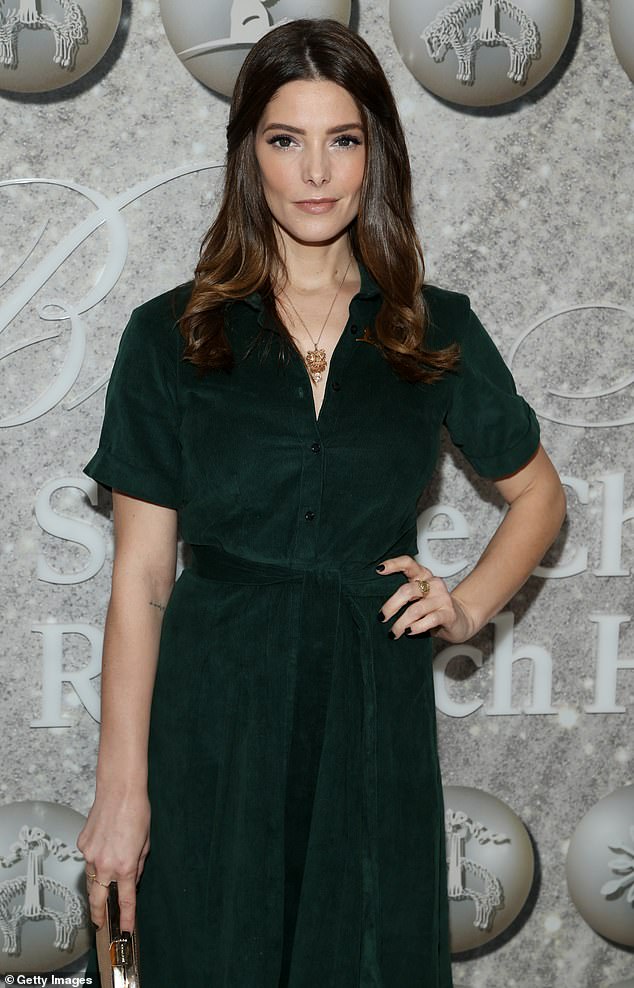 Twilight: Ashley Greene wore his favorite colored dress for the fun event ahead