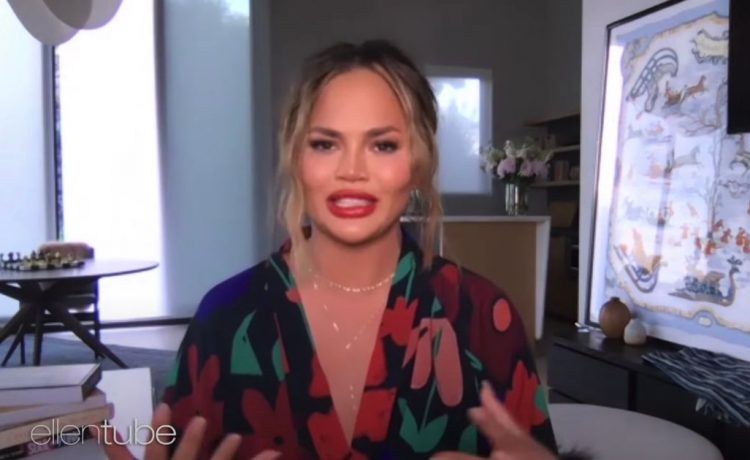 Chrissy Teigen has paid a heartbreaking tribute to her baby Jack on what would have been his due date.

Back in September, the 35-year-old Cravings cookbook author told how she and husband John Legend, 42, suffered a pregnancy loss.

The pair had planned to name their baby boy Jack but he was lost at 20 weeks gestation.

On Saturday, Teigen honoured his memory by wearing a bracelet with his name on it alongside two others with the names of her daughter Luna Simone, 4, and son Miles Theodore, 2.

She shared a photo on her Instagram page of the bracelets stacked on her wrist and wrote: “Today was your due date. we love you forever.”

The model appeared on The Ellen DeGeneres Show earlier this month and spoke about how her pregnancy loss was a “transformative” experience for her.

Teigen said: “Even thinking back to it now, I am still in therapy about it and I’m still coming to terms with it.

“I have maternity clothes, and there are things that I bought for my eighth month and my ninth month. So it’s just hard because he would’ve been born this week, so you look at those things and you have these constant reminders.”

She added that it was “really helpful” that she was “raised in a household that was very open about loss,” which upon reflection “can be a beautiful thing.”

“It was a really transformative thing for me and in a way it really saved me, because I don’t think that I would’ve discovered therapy and then sobriety and this path of feeling good about myself and feeling like a new person.”

Teigen also explained how Luna and Miles are keeping their brother’s memory alive in the family’s daily life.

“It’s been so beautiful to see my kids, the way they talk about him.

“We’ll be going to the beach or something and they’ll say, ‘Is baby Jack with us right now? Do you think he’s up in the clouds?’ It’s just so beautiful and so sweet.

“You don’t ever imagine it happening to you — I think that was the crazy part for me is, ‘I hear these stories about other people. This kind of stuff doesn’t happen to me.’ So when it does, you’re just so shocked.”

“And then you think about all the people that go through it in silence and you get really sad for them. Ours was so public, so so many people were so supportive.”

She added. “You really gain this incredible amount of empathy. And I really, somehow, think I’m a better person now. And I just have the best support system ever.”

*If you have been affected by this story, advice and support can be found at Sands (stillbirth and neonatal death charity). You can call them on 0808 164 3332 or email helpline@sands.org.uk