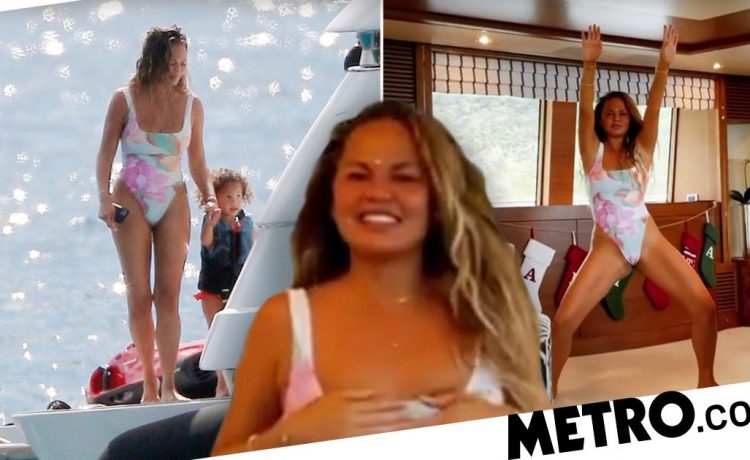 Chrissy Teigen has revealed to fans that she is four weeks sober.

The 35-year-old shared the achievement with a fan on Instagram, after she posted a video of herself dancing energetically in a high-cut swimsuit.

In the video, filmed on a yacht in St Barts, Chrissy began singing Good Morning from Singing In The Rain, but despite her enthusiasm in her dance moves, she couldn’t quite get the lyrics right.

One person commented: ‘I need whatever drugs you’re on!!’, with Chrissy responding: ‘4 weeks sober’, followed by heart and prayer emojis.

The star’s fans replied with messages of pride and well wishes.

The Lip Sync Battle star has previously spoken about her alcohol use, saying she is unable to have just one drink.

Speaking to Cosmopolitan in 2017, when she had taken a break from drinking, Chrissy said: ‘I was, point blank, just drinking too much. I got used to being in hair and makeup and having a glass of wine.

‘And that feeling, there’s just nothing like that. You feel horrible. It’s not a good look for me, for John, for anybody.’

She added: ‘Nobody really brought it up to me. They just assumed that it was okay because I always felt okay the next morning.

‘I knew in my heart it wasn’t right. It makes you very short with people. People think it’s cutesy and fun to go on these boozy brunches, but there’s more to it. I’ve never once been like, “I’m sure glad I had that boozy brunch!”’

It has been a difficult year for Chrissy, following the loss of her and husband John Legend’s son Jack following complications in the pregnancy.

The star has told fans that she will never be pregnant again following the tragedy, and has been updating her followers on her journey with grief.

As well as ditching alcohol, Chrissy has decided to ‘stop explaining’ herself on social media in 2021.

She wrote: ‘excited about the new year’s resolution I started early: not explaining S*** to you people. For years I have been CONSUMED by the overwhelming need to explain why I’m doing what I’m doing, why I did why I did. NO MORE.

‘I’m gonna doooooo the s*** I doooooo and you can go bonkers about it [sic].’

Chrissy, John and their kids Luna, four, and Miles, two, are finishing out the year on a yacht in St Barts, and were pictured soaking up the sun on the deck.

John, 42, was also seen venturing out onto an inflatable island in the sea, with his daughter Luna getting into a life jacket in preparation of joining him.