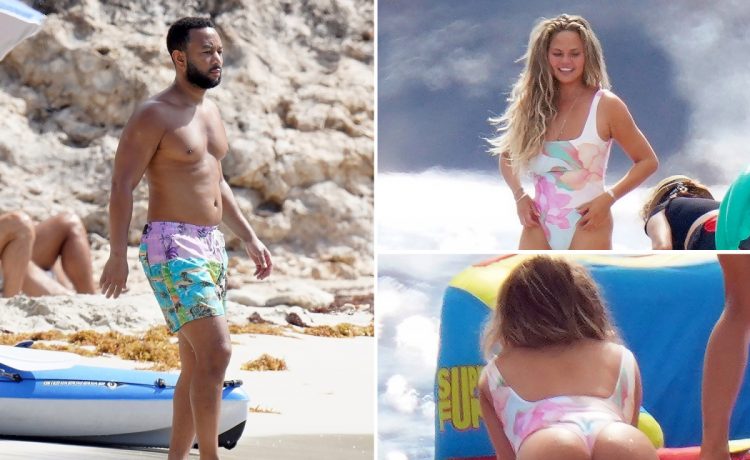 CHRISSY Teigen and John Legend soaked up the sun on their yacht during a beach getaway.

The relaxing day on the water comes after the 35-year-old model revealed she’s four weeks sober.

The power couple were recently spotted lounging on their yacht and spending time on the beach with their kids in France.

Chrissy stunned in a colorful floral one piece as she hung out on the boat with their four-year-old daughter Luna and two-year-old son Miles.

Meanwhile, the 42-year-old musician wore an equally colorful swimsuit that consisted of a purple and blue design.

John even hit the water after he was spotted wearing snorkeling equipment on the beach.

The supermodel also gave her fans a closer look of her stylish swimsuit as she happily danced around and sang “good morning” in an Instagram video posted on Tuesday.

On Tuesday, Chrissy shared that she’s four weeks sober after she and John tragically lost their unborn son Jack.

After she posted the fun video of her dancing during the family’s St. Barts trip, one of her 33.5million followers commented: “I need whatever drugs you’re on!!”

In response, Chrissy revealed she is “4 weeks sober” and added some heart and prayer hand emojis.

Her followers responded with messages of support, with one fan writing “this is wonderful ❤️❤️❤️” and another adding, “proud of you!! 😘”

The supermodel has been open about her “grief depression hole” after the devastating loss of their third child, Jack, in late September.

Chrissy revealed she’s been struggling, but is getting “help.”

Back in November, Chrissy tweeted: “I’m not tweeting much because I’m honestly in a bit of a grief depression hole but do not worry as I have so much help around me to get better and I’ll be fixed soon.

“They’ll call when I’m better and ready for pickup and You can swing by and grab me ok? Thank you and love you!”

Maya Jama & Stormzy secretly celebrated Christmas together at her home

FROM RUSSIA WITH LOVE

READ  Netflix's 'Never Have I Ever': How Mindy Kaling made the teen show she always wanted

She shared that the couple lost Jack with a series of black and white photos of the couple in the hospital in September.

Alongside the tragic photos, Chrissy wrote at the time: “We never decide on our babies’ names until the last possible moment after they’re born, just before we leave the hospital.

“But we, for some reason, had started to call this little guy in my belly Jack. So he will always be Jack to us. Jack worked so hard to be a part of our little family, and he will be, forever.”