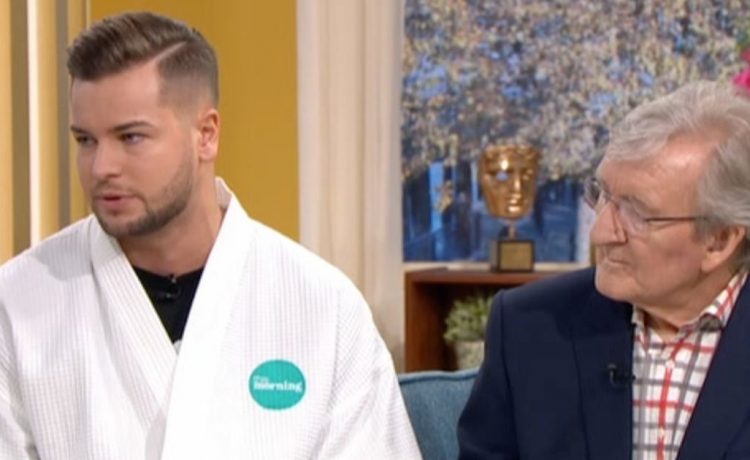 Chris Hughes was moved to tears after hearing how a fan was saved from cancer after seeing him get naked on This Morning.

In January 2018 Chris appeared partially nude on the daytime show to undergo a testicular examination in the hope of encouraging other men to check themselves.

A year on from the brave stunt, Chris was overwhelmed to be told his appearance helped save a man’s life.

After seeing Chris’ latest TV appearance in The Real Full Monty On Ice, a man named Simon tweeted him: “You said you saved your brothers life. Well you saved mine too. I got checked after I saw you on @thismorning. Was a long road, but finally got diagnosed with testicular cancer in September. You are my hero!”

The Love Island star shared the message with his followers and penned: “Wow this made me cry. Jesus. Thank you, live a long life my friend.”

In a separate message to Simon, Chris praised him for speaking out and called him a ‘hero.’

Chris, 27, decided to appear on the daring ITV reality series after seeing his own brother’s battle cancer.

Ben Hughes made the discovery after seeing his younger brother Chris on This Morning.

During the segment, Chris had his testicles checked by Dr Chris Steele live in the studio.

He showed off a scar on his testicle as he opened up about his own shock health scare.

“I was around 14 and I noticed like a build up of veins and eventually got it looked at [six years later, aged 20] and they referred to hospitals and I ended up having three operations on my left testical, and that was more down to safety with infertility, because the veins take oxygen.

“My sperm count was quite low, I have had a hydrocele. I have had four operations on them,” explained Chris.

The reality star said he had waited until he was 20 to see a doctor because he was too embarrassed.

He said he hoped that by having the examination on the ITV daytime show in front of millions it would help other men not to feel ashamed of their bodies.

Chris’ older brother Ben watched the episode go out and went on to check his testicles where he discovered a lump that doctors found to be cancerous.

Thankfully, Ben was later given the all-clear but revealed that he now only has a 20% chance of having children.

The Hughes brothers discussed their health scares and thoughts on fertility in BBC documentary Me, My Brother and Our Balls.