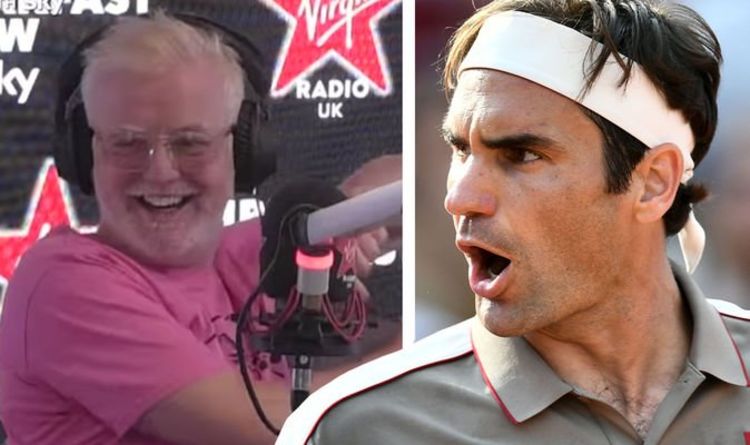 Chris Evans, 54, recalled the first time he ever met tennis champion Roger Federer, after the sports star mistook him for a bar owner in London. Telling his co-stars Vassos Alexander and Rachel Horne the story so dear to his heart, the Radio DJ giggled as the Wimbledon legend hadn’t clocked that he was also sat with none other than singer, Tom Jones.

“Shall I tell you my Roger Federer story again,” Chris asked, eagerly as both Vassos and Rachel agreed.

“So, I was in a bar with my mate in London and Bear Grylls was in there with his mate and we’re the only two couples in the bar…” Chris began.

“My mate had nipped outside and Bear was sitting with Roger Federer.”

At this point Rachel, who seemed to have not heard this story before seemed stunned.

READ MORE: James Martin apologises for having guest on show after crazy reaction

The former BBC star continued: “Roger and Bear hadn’t seen who I was with – I was sat with Tom Jones, so there’s me, Tom Jones, Roger Federer and Bear Grylls in a bar – this sounds like a joke!” he giggled as the studio roared with laughter.

Chris admitted he couldn’t remember all of what happened next, but when Roger was introduced to Chris, it appeared that he believed he was the owner of the bar.

“Roger didn’t see at any point that I was with Tom and he obviously didn’t see a barman,” Chris explained.

He added that his friendship with the survival expert goes way back and before they left, he stopped to say goodbye and introduce Roger to the radio host.

Chris made the admission while speaking to Graham Norton, who also recently quit his Radio 2 show to front a weekend show on Virgin Radio.

Graham took the opportunity to thank Chris for encouraging him to make the move to Virgin Radio, as the latter replied: “The last time you were on the breakfast show you said, ‘It’s lovely here and I said, ’It is, it is’.

Explaining the differences between hosting the two radio shows, Chris continued: “I loved working at Radio 2, but I didn’t realise there was another level of joy to be had.

“And you got the same vibe didn’t you?” he quizzed The Graham Norton Show presenter.

“And you got the same vibe didn’t you?” he quizzed The Graham Norton Show presenter.

Graham agreed: “I really did. And you were saying ‘oh you should come and work here’.

“And as I left thinking ‘well, that will never happen, but actually that would be quite nice’.”

Chris announced his departure from the BBC in 2018, after eight years at the helm of Radio 2 and 13 years at the station, making his Virgin Radio debut in January 2019.

The Chris Evans Breakfast Show aires weekdays at 6:30am on Virgin Radio.