Chris Evans reveals that he keeps in shape by fasting for 12 hours a day – and he sometimes lasts a whole 16 hours.

The 53-year-old made the revelation on his Virgin Radio Breakfast Show on Tuesday morning after turning down a chocolate brownie he was offered by his collegue.

Sharing his secret dieting tactics for the first time, Chris told his listeners: ‘I do this 12 hour fast, which I have never talked about on the radio.

‘But I don’t eat for 12 hours a day as it improves everything. 16 hours is even better, but 12 hours is easy especially if you do a breakfast show.’

Blimey, we probably couldn’t even last three hours without dreaming of lunch.

Revealing how his breakfast radio schedule keep him in check, Chris continued: ‘If you get up at silly o’clock, not eating for a 12 hour period is very easy.

Earlier this year, Chris joked that he would ‘freeze off his moobs’ during a chat with Dr Ranj Singh about weight loss.

Chris said: ‘I was looking at my moobs this morning.

‘I ran the marathon ten days ago and my moobs are in full swing.

‘That must be oestrogen, mustn’t it? What’s going on?’

Perhaps giving the presenter food for thought, Dr Ranj replied: ‘It’s not necessarily just oestrogen. But you know what, you can work them off.

‘You can freeze them off if you want.’

Chris then joked: ‘It’s cold in here, I’ve just frozen my moobs off this morning.’

MORE: Why did Chris Evans turn down Strictly Come Dancing for a second time? 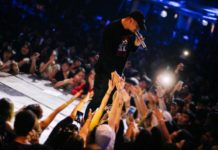 Frank Skinner: ‘I’m all for a bit of moral menace’