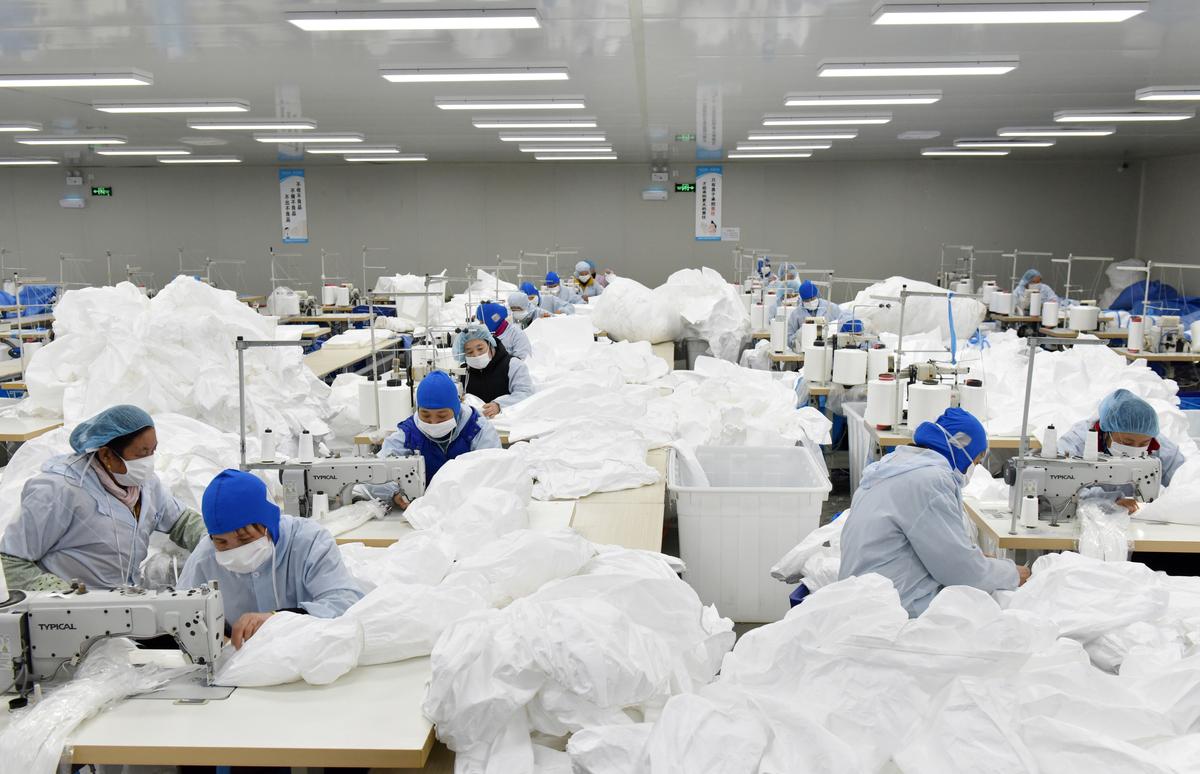 BEIJING/SEOUL (Reuters) – Countries began isolating hundreds of citizens evacuated from the Chinese city of Wuhan in an effort to stop the global spread of an epidemic that has killed 170, with South Korea calling for calm in the face of protests at a quarantine center.

Workers make protective suits at a factory, as the country is hit by an epidemic of the new coronavirus, in Chaohu, Anhui province, China January 28, 2020. China Daily via REUTERS

Asian stocks and currencies fell as the death toll rose and more cases were reported around the world, fuelling concern that China, the world’s second-largest economy, may be hit hard.

There are growing concerns that thousands of Chinese factory works on Lunar New Year holidays may struggle to get back to work next week due to extensive travel restrictions imposed to stop the virus spreading.

Alphabet Inc’s Google and Sweden’s IKEA joined other major firms in closing operations in China, and the list of sports events hit by the virus grew, with the Chinese Football Association postponing domestic games in 2020 and Olympic women’s football qualifying matches in Australia in doubt, with the Chinese team quarantined in a Brisbane hotel.

China’s National Health Commission said the total number of deaths from the coronavirus in the country climbed to 170 as of late Wednesday and the number of infected patients rose to 7,711.

Almost all of the deaths have been in the central province of Hubei, home to about 60 million people and now under virtual lockdown. The virus emerged last month in a live wild animal market in the provincial capital Wuhan.

Infections have been reported in at least 15 other countries with 104 confirmed cases. But no deaths have occurred outside China.

It is too early to determine the death rate as there are likely to be many cases of milder disease going undetected. Like other respiratory infections, it spreads between people in droplets from coughs and sneezes.

It has an incubation of between one and 14 days, and there are signs it may spread before symptoms show.

Chinese National Health Commission Minister Ma Xiaowei has said the virus was infectious during incubation, which was not the case with Severe Acute Respiratory Syndrome (SARS), another coronavirus that emerged from China and killed about 800 people in 2002-2003.

The World Health Organization’s Emergency Committee is due to reconvene on Thursday to decide whether the virus constitutes a global emergency. Of particular concern have been cases of human-to-human transmission in Germany, Vietnam and Japan.

Countries getting their citizens out of China have to decide what to do with them, given efforts to keep the virus at bay.

Australia, South Korea, Singapore and New Zealand will quarantine all evacuees regardless of whether they show symptoms for at least two weeks, while the United States and Japan were planning voluntary isolation for shorter periods.

Two of three returnees from Japan who tested positive for the virus in Tokyo on Thursday had shown no symptoms of their infections.

South Korean protesters used tractors to block access to facilities earmarked as quarantine centers in the cities of Asan and Jincheon on Wednesday.

A handful of protesters calling for the quarantine center to be located further away from homes and schools in Jincheon gathered outside the site on Thursday.

President Moon Jae-in urged people not to give in to fear as the country prepared to evacuate the first of about 700 citizens from Wuhan.

“The weapons that will protect us from the new coronavirus are not fear and aversion but trust and cooperation,” Moon said.

Up to four planned South Korean evacuation flights to Wuhan are expected to begin later on Thursday.

Singapore said it was brining 92 citizens home on Thursday and all of them, and the foreign ministry staff accompanying them, will either be taken to hospital or quarantined for 14 days.

Nearly 200 Americans, mostly diplomats and families, airlifted from Wuhan on Wednesday will remain isolated at a U.S. military base in California for at least 72 hours, officials said.

A second flight with Japanese evacuees from Wuhan landed in Japan on Thursday with nine people showing symptoms of fever or coughing, broadcaster NHK reported.

The crisis is weighing heavily on China’s economy.

A government economist said first-quarter growth could fall by one point to 5% or lower.

Some airlines are suspending flights to China, from British Airways and Lufthansa to Air Canada and American Airlines.

Alphabet Inc’s Google said it would temporarily shut all its offices in China and Sweden’s IKEA said it had temporarily closed all its China stores.

In many Chinese cities, streets are largely deserted.

Tourist attractions are closed, while Starbucks coffee shops are requiring people to have their temperatures checked and to wear masks.

High cholesterol: Pain in hands or feet could be an indication your levels are too high