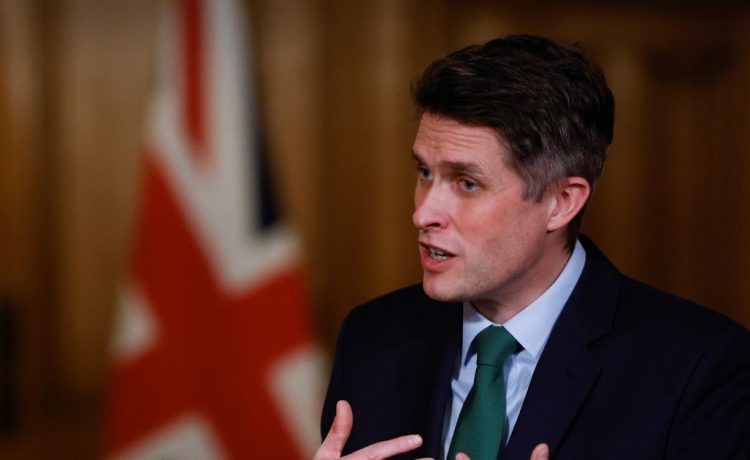 Gavin Williamson has “let down the nation’s children” with his plan to help pupils catch up after Covid-19 disruption, Union leaders said last night.

Under the Education Secretary’s plan, some 6 million, 15-hour tutoring courses will be offered to disadvantaged pupils over the next three years.

And the Government said 500,000 teachers will be given “world class training”.

But plans to lengthen the school day will stay on the shelf for now – amid reports Chancellor Rishi Sunak is reluctant to stump up more cash for the programme.

Leaked proposals published yesterday recommended the school day be lengthened by half an our, to give all children an extra 100 hours of learning a year.

Geoff Barton, General Secretary of the Association of School and College Leaders (ASCL), said: “This is a hugely disappointing announcement which lets down the nation’s children and schools at a time when the government needed to step up and demonstrate its commitment to education.”

He added: “There has obviously been a battle behind the scenes over funding for education recovery which the Treasury has clearly won with the result that the settlement is less than a tenth of the £15 billion that was being mooted.”

The plans, drawn up by the Government’s ‘catch-up czar’ Sir Kevan Collins, were expected to run to £15 billion.

But Mr Sunak reportedly “balked” at the £15 billion figure – which a Treasury insider branded “ridiculous”.

A Whitehall source said last night: “Together we will work out exactly what is needed in terms of extra time for children’s catch up – as well as what teachers and parents think is best and will work too.

“It’s right for both children and the taxpayer that we know what we’re buying before we spend.”

READ  China is being given too easy a ride by the UK Government, report by MPs warn

The Department for Education said it was a “long-term plan” and that extending school hours would now be reviewed and a decision taken “later in the year to inform the spending review.”

Sir Kevan said: “The investments in teaching quality and tutoring announced today offer evidence-based support to a significant number of our children and teachers.

“But more will be needed to meet the scale of the challenge.”

And Kate Green, Labour’s Shadow Education Secretary said: ““This announcement makes a mockery of the Prime Minister’s claim that education is a priority.

“His own education recovery commissioner has all but said this plan is insufficient. Sir Kevan Collins told Ministers that 10 times this level of investment was needed to help children recover.

“ Labour has set out a bold plan that will provide new opportunities for all children to play, learn and develop post-pandemic. The Government has let down children and families over the last year and the last decade and is set to do so again.”

The package announced last night includes £1bn to pay for up to 6 million, 15-hour tutoring courses for disadvantaged school children and expansion of the 16-19 tuition fund.

Another £400 million will help give early years practitioners and 500,000 school teachers across the country training and support.

And schools and colleges will be funded to give some year 13 students the option to repeat their final year.

“Rarely has so much been promised and so little delivered,” she said.

“The ‘new’ money being offered amounts to £1.4bn – way below the £15bn sum which Kevan Collins, the Education Recovery tsar, judged is needed to repair the damage done to the nation’s pupils because of Covid.

“Where in these plans is the funding for extra-curricular activities to support children and young people to regain their confidence in their abilities and talents? Where is the funding for drama and music, sport and skills development?

“The Treasury has shown, in this paltry offer, that it does not understand, nor does it appreciate, the essential foundation laid by education for the nation’s economic recovery.

“Its failure, on this scale, to fund what is needed for education recovery, is a scar which will take generations of children and young people to heal.

“They, their parents and our nation deserve much better than this.”

Meanwhile, Labour set out their own £15 billion plan to help children catch up, with breakfast clubs for every child, free school meals in all school holidays and small group tutoring for all who need it.

Kate Green, Labour’s Shadow Education Secretary, said: “Children are excited to be back in the classroom with their friends and hungry to learn.

“After such disruption, we owe it to them to match their energy and motivation, with the support and resources they need to thrive, not just whilst they catch-up, but for their school careers and beyond.

“Our plans deliver this, by funding activities to combine learning and play while investing in our teachers and staff, Labour will ensure that children not only recover, but are supported to push on.

“In contrast, the Conservatives are showing no ambition for children’s futures.”

Announcing his plan, Education Secretary Gavin Williamson said: “I am incredibly proud it recognises the efforts and dedication of our teachers who are at the forefront of children’s recovery – making sure every teacher has the opportunity to access world-leading training, giving them the skills and tools to help every child they work with to fulfil their potential.

“The package will not just go a long way to boost children’s learning in the wake of the disruption caused by the pandemic but also help bring back down the attainment gap that we’ve been working to eradicate.”

Boris Johnson added: “Young people have sacrificed so much over the last year and as we build back from the pandemic, we must make sure that no child is left behind.

“This next step in our long-term catch up plan should give parents confidence that we will do everything we can to support children who have fallen behind and that every child will have the skills and knowledge they need to fulfil their potential.”

The Treasury won – these proposals are depressingly lacking in ambition

By GEOFF BARTON, General Secretary of the Association of School and College Leaders

Education recovery in the wake of the Covid pandemic was a great opportunity for the government to put real meaning into its oft-repeated mantra about levelling up.

Many disadvantaged children have been particularly badly hit by the pandemic – experiencing learning loss that comes on top of an existing gap in educational attainment that has long been a problem.

A lot of these children were unable to access online resources during lockdowns because the government was so painfully slow in rolling out its scheme to provide laptops.

So, what we needed was a really big, ambitious plan for education recovery. A well-respected think-tank, the Education Policy Institute, calculated that a three-year funding package totalling £13.5 billion is required by the government to reverse the damage to the learning of pupils.

And there were reports that a £15 billion plan had been put forward by the Education Recovery Commissioner. Instead, what we have got from the government is a commitment to spend less than a tenth of that figure – £1.4 billion – on its next step on education recovery.

That might sound like a big sum of money but it is divided into many different pots, and has to stretch across thousands of schools and millions of pupils.

The delivery processes for this funding are also incredibly complicated. For example, the money for extra tutoring does not cover the whole cost, and schools have to pay an increasing share over the funding period.

There is a vague suggestion that there will be more investment to come in the future with the findings of a review to be set out later in the year.

But it is difficult to escape the conclusion that a rumoured behind-the-scenes battle over how much to spend on education recovery has been decisively won by the Treasury. The result is a plan that is depressingly, but predictably, lacking in ambition.