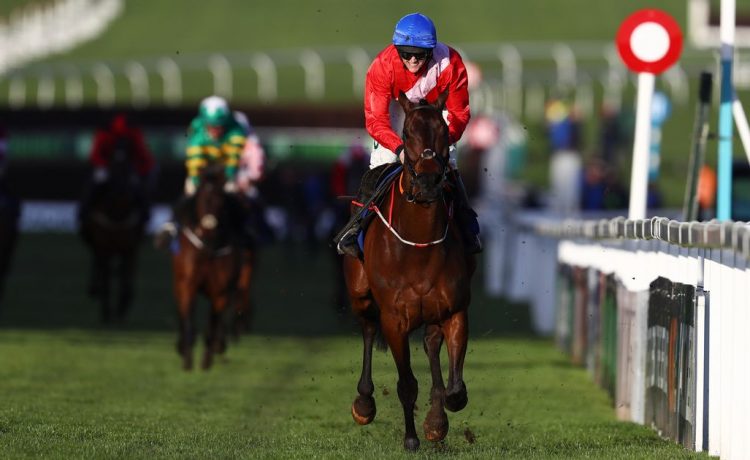 A PLUS TARD is tipped to give Rachael Blackmore and Henry de Bromhead a fitting end to the week with victory in the WellChild Cheltenham Gold Cup.

The pair have taken all before them at Prestbury Park this week – and can now secure the greatest prize of all.

Blackmore won the Ryanair Chase in the same colours on Allaho on Thursday, during a card which featured the Paddy Power Stayers’ Hurdle success of Flooring Porter.

It was a Festival first for jockey Danny Mullins, who had a late call-up for the ride in the day’s main contest.

Jack Kennedy, on the floor when hot favourite Envoi Allen fell in the opening Marsh Novices’ Chase, rounded off the day by securing a shock win on Mount Ida – who hit odds of 999-1 in-running.

TRITONIC is fancied to take his record over obstacles to three wins from as many attempts.

The son of Sea The Moon was a smart performer on the Flat for Alan King, winning twice from nine starts and earning a British Horseracing Authority rating of 99.

Tritonic, beaten half a length in the inaugural running of the Golden Gates Handicap at Royal Ascot last June, made his obstacles debut at the Queen’s racecourse in January.

Sent off at 5-4 for a 10-runner juvenile event on the Clarence House Chase, Adrian Heskin’s mount pounced late to overhaul Casa Loupi by a length, the pair 18 lengths clear of the third horse.

King, twice a winner of the juvenile hurdlers’ championship with Penzance (2005) and Katchit (2007), then sent Tritonic for the Grade 2 Adonis Juvenile Hurdle at Kempton Park last month.

Following in the hoofprints of Penzance, who had warmed up for the National Hunt Festival in the same race, my selection put up a smart effort, leading on the run to the final flight before stretching 10 lengths clear of Ascot runner-up Casa Loupi.

There is plenty more where that came from.

Zanahiyr has impressed in a three-race unbeaten sequence for his Cullentra House stable – now under the name of Denise Foster instead of Gordon Elliott – and has to be feared, along with ex-Elliott trainee Quilixios and Adagio, who, contrary to what his name suggests, is anything but slow.

1 YOU RAISED ME UP

YOU RAISED ME UP needs a personal best to rack up the hat-trick back in handicap company – but can prove up to the job.

After a hurdles debut second at Listowel in September 2019, Martin Brassil’s gelded son of Presenting again took the silver medal in a maiden event at Punchestown the following month, before a fifth at Fairyhouse at the end of November.

You Raised Me Up made his handicap bow – so far, his only appearance in the sphere – in a white-hot contest over two miles at Leopardstown’s Dublin Racing Festival in February of last year, running a fine third to Thosedaysaregone.

We didn’t see You Raised Me Up until last September, when he returned at Listowel in September to lift a maiden hurdle by two and three-quarter lengths form Run For Oscar.

And he followed up, following another 143 days off, with a half-length call over Petibonome in a Naas novice event in the middle of last month.

Darragh O’Keeffe’s mount still has more to give on his seventh attempt over obstacles, and the likelihood of decent ground is another plus.

Dangers lurk at every turn in one of the betting races of the week, with Third Time Lucki, Thyme White, Drop The Anchor and Champagne Gold just four names worth throwing into the melting pot.

ALAPHILIPPE gets the vote to give trainer Fergal O’Brien, who is enjoying his best-ever campaign, a first Cheltenham Festival triumph.

A point-to-point winner in Ireland, the seven-year-old landed a bumper at Ffos Las in October on his stable bow before being sent over obstacles.

Paddy Brennan’s partner got off to the perfect start with a six-and-a-half-length supremacy over two and a half miles at Ayr in November, doubling up by an additional length at Sedgefield three days before Christmas.

His bid for a hurdling hat-trick came unstuck at Taunton in January as Alaphilippe went under by three parts of a length to Stellar Magic.

But normal service was resumed last time when the selection moved up in both class and distance for the Grade 2 Prestige Novices’ Hurdle over three miles at Haydock Park.

Always moving well, Alaphilippe had yet to be asked a question when rival Young Buck capsized at the third-last flight, and came home 14 lengths to the good of Mr Harp.

He hasn’t finished yet.

A first attempt at three miles is very likely to see Stattler and Fakiera in their best light yet, while Adrimel is another to command respect.

A PLUS TARD has the capacity to excel now he bids for steeplechasing’s ultimate prize to crown a momentous week for Rachael Blackmore and Henry de Bromhead.

Both horse and rider have travelled a long way since, with A Plus Tard moving up to the top level to beat Chacun Pour Soi over two miles at Leopardstown the following Christmas.

The seven-year-old ran third to Min when the 7-4 favourite for the Ryanair Chase 12 months ago, but, after a comeback second in the Grade 2 Fortria Chase at Navan in November, A Plus Tard stated a strong case for the Gold Cup when lifting the Savills Chase back at Leopardstown over Christmas.

Attempting three miles for the first time my selection proved his stamina with a late thrust under Darragh O’Keeffe to overhaul Kemboy and score by half a length, with de Bromhead’s Minella Indo and Blackmore falling at the eight fence.

Both his style of running and his pedigree suggest A Plus Tard will find the extra two furlongs and 70 yards within range as he bids to give his trainer and jockey a Cheltenham Gold Cup triumph to add to Tuesday’s Champion Hurdle with Honeysuckle.

Al Boum Photo seeks his own piece of history with a Gold Cup hat-trick and must be considered.

Drying ground would be a worry for stablemates Aso and Royale Pagaille, and could also count against 2018 champion Native River.

Champ is preferred to his stable-companion, and last year’s runner-up, Santini, and, with Black Op outclassed and 2020 third Lostintranslation out of sorts, the obvious shout at big odds is course specialist – and King George VI Chase hero – Frodon.

1 IT CAME TO PASS

IT CAME TO PASS is the selection to become the fourth back-to-back winner in the past decade.

Last season, It Came To Pass, trained by Cork-based Eugene O’Sullivan for his wife Alurie and ridden by their daughter Maxine, ranked among the outsiders at 66-1.

But the son of Brian Boru laughed at those odds, leading at the second-last fence and careering up the hill to beat favourite Billaway by 10 lengths.

The 11-year-old’s form this season – a fourth at Fairyhouse and an unseat at Thurles – isn’t inspiring.

But it didn’t amount to much last year, either, and It Came To Pass wouldn’t be the first – or the last – horse to raise his game returning to the home of jump racing.

Billaway has to be in the picture once more, with Staker Wallace and 2019 victor Hazel Hill other candidates to make the podium.

ELIMAY is hard to get away from in the Cheltenham Festival’s newest race.

Up until 2020, the meeting has staged 18 mares-only contests since the David Nicholson Mares’ Hurdle was inaugurated in 2008, and Willie Mullins has won 14 of them.

Ireland’s champion trainer saddles four of the 11 runners, including market leaders in Elimay and Colreevy, and it’s the former who gets the verdict.

A three-time winner over hurdles, the grey daughter of Montmartre has gone to a new level since being sent chasing, beginning with a five-length margin in a Grade 3 chase for her gender at Cork in December 2019.

Elimay followed up in Grade 2 company at Thurles six weeks later, and made stablemate Allaho work hard for victory when returning to the discipline in Thurles’ Grade 2 Horse & Jockey Hotel Chase in January.

Her five-and-a-half-length supremacy over Shattered Love in the Listed Opera Hat Chase at Naas last month will have set Mark Walsh’s mount up perfectly for today.

Colreevy, three from three in novice chases – including the top-level Faugheen Novice Chase at Limerick on Boxing Day – is the obvious threat to her stable-companion, ahead of Shattered Love and Moyhenna.

FIRE ATTACK is an unexposed hurdler who looks the type to thrive for racing in a big-field handicap.

Having shown smart form in two runs in bumpers last winter, Joseph O’Brien’s son of Westerner started off at Grade 3 level over hurdles, going under by half a length to Fakiera at Navan in November.

It was no disgrace that Fire Attack couldn’t cope with Appreciate It at Leopardstown over Christmas – after all, who can?

Fire Attack was beaten when falling at the last behind Dreal Deal in the Grade 2 Moscow Flyer Novice Hurdle at Punchestown in January, but there was more to like about his four-length second to Thedevilscoachman in Listed company at the Co Kildare venue on Valentine’s Day.

Oakley Brown’s partner hasn’t got to the bottom of the barrel by any means, and if the theory that an honest gallop over two and a half miles will see him in his best light yet holds any water, today’s handicap mark looks within range.

The meeting’s finale is a race of endless possibilities, and Gentleman De Mee, Langer Dan, Frontal Assault and Eglantine Du Seuil are all entitled to a second look.