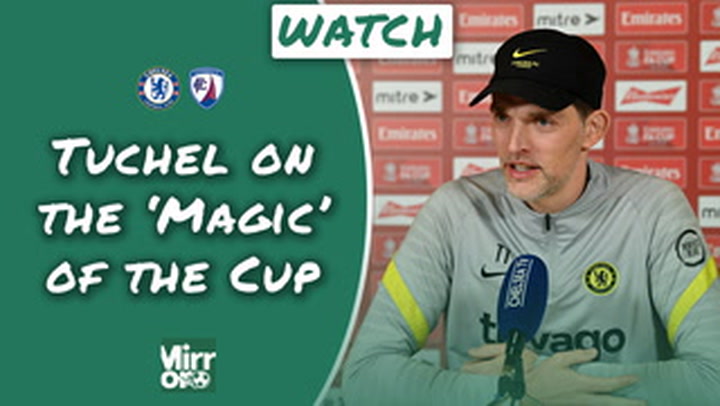 Thomas Tuchel on the ‘Magic’ of the FA Cup

Chelsea may yet offload star striker Romelu Lukaku following his outspoken comments on the club last month, with PSG the latest side to be linked to the Belgian forward.

Lukaku stunned fans across the world as he revealed wasn’t happy at Stamford Bridge less than six months since his move from Serie A side Inter Milan last summer as he questioned manager Thomas Tuchel’s tactics.

The striker was subsequently dropped for the Blues’ Premier League game against Liverpool and has been linked with moves to a number of top sides, with PSG now said to have entered the race.

It comes as the Blues desperately hunt for a solution to their problems in both full-back positions following injuries to Ben Chilwell and Reece James.

Barcelona star Sergino Dest has reportedly changed his mind on a move to Stamford Bridge, while Tuchel is said to know who he wants to resolve the situation.

Here are all the latest Chelsea transfer rumours.

Have Your Say! Who would you like Chelsea to sign in the January transfer window? Tell us here.

Thomas Tuchel has reportedly decided on his solution to the Blues’ problems at left-back.

Following Ben Chilwell’s injury, Chelsea have been linked with a move for Everton’s Lucas Digne.

But, according to transfer don Fabrizio Romano [via Football.London ], any move for Digne now looks “unlikely” as Tuchel wants Emerson Palmeiri to return from his loan at Lyon to resolve the club’s problems.

Barcelona full-back Sergino Dest has changed his mind about a move to Stamford Bridge, it has been claimed.

Dest has been widely linked with a move to Chelsea to provide cover for Reece James following news of his lengthy injury lay-off.

And after Barca boss Xavi brought in former teammate Dani Alves, it appeared his days at the Camp Nou could be numbered.

Dest reportedly rejected a move to Chelsea “a few weeks ago”, according to Spanish publication El Nacional.

But the American is now said to have changed his mind and is ready to make the switch to the Premier League after falling down the pecking order at the Catalan giants.

Paris Saint-Germain could swoop for Romelu Lukaku should Kylian Mbappe depart for Real Madrid, it has been reported.

El Nacional reports that Lukaku is the player PSG see as being capable of helping fans “forget Mbappe’s goals” and the club have been encouraged following news that the Belgian is “not happy” at Stamford Bridge.

The report adds that PSG owner Nasser Al-Khelaifi is an admirer of the Blues attacker and is lining up a £75.5million move to bring him to the French capital.