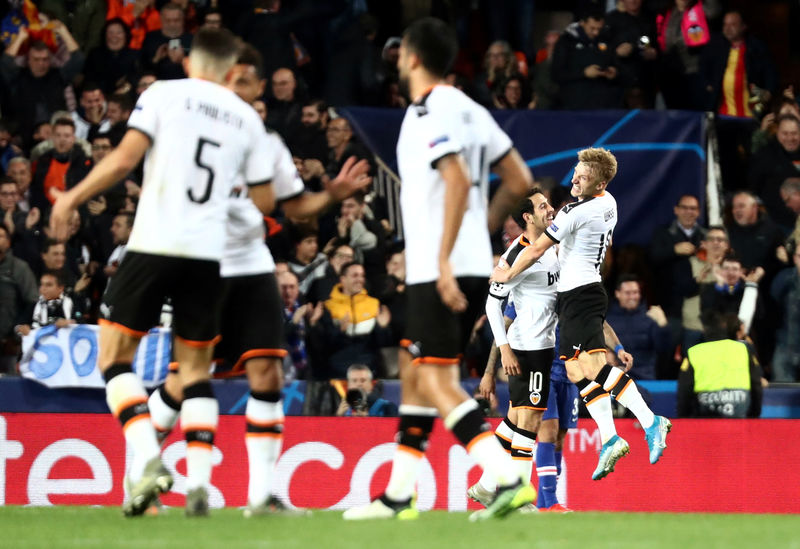 VALENCIA, Spain (Reuters) – Chelsea will have to wait to book their place in the Champions League knockout stage after a freak goal from Valencia’s Daniel Wass denied them victory in an epic 2-2 draw on Wednesday in which the Spaniards missed a glut of clear chances.

Victory for either side would have sent them through and Valencia went ahead at Mestalla when Carlos Soler scored in the 40th minute after team mate Maxi Gomez had missed two gilt-edged chances, but Mateo Kovacic levelled for Chelsea two minutes later.

Chelsea’s top scorer Tammy Abraham was carried off on a stretcher with a serious-looking injury before halftime but Christian Pulisic put Frank Lampard’s side ahead in the 50th minute after a lengthy VAR review ruled him onside.

Valencia forward Rodrigo Moreno missed an open goal later in the half and then captain Dani Parejo was denied from the penalty spot by Chelsea keeper Kepa Arrizabalaga.

The Spaniards eventually levelled in the 82nd minute with a remarkable goal from Danish midfielder Wass, who looked set to cross from the right wing but instead flummoxed Arrizabalaga by firing a shot across goal which bounced off the far post and into the net.

Valencia should have won the game in added time when Rodrigo failed to connect properly with a cross from close range.

The draw means both sides are on eight points after five games but Valencia have a better head-to-head record and they lead Group H, with Ajax Amsterdam third on seven points but with a chance to go top when they visit Lille later on Wednesday.

READ  With elbow bumps and masked fans, World TeamTennis kicks off season
Disclaimer: Fusion Media would like to remind you that the data contained in this website is not necessarily real-time nor accurate. All CFDs (stocks, indexes, futures) and Forex prices are not provided by exchanges but rather by market makers, and so prices may not be accurate and may differ from the actual market price, meaning prices are indicative and not appropriate for trading purposes. Therefore Fusion Media doesn`t bear any responsibility for any trading losses you might incur as a result of using this data.