Chelsea striker Romelu Lukaku limped off the pitch during the Blues’ 4-0 home win against Malmo in the Champions League, and the Belgian could be set for a length spell on the sidelines 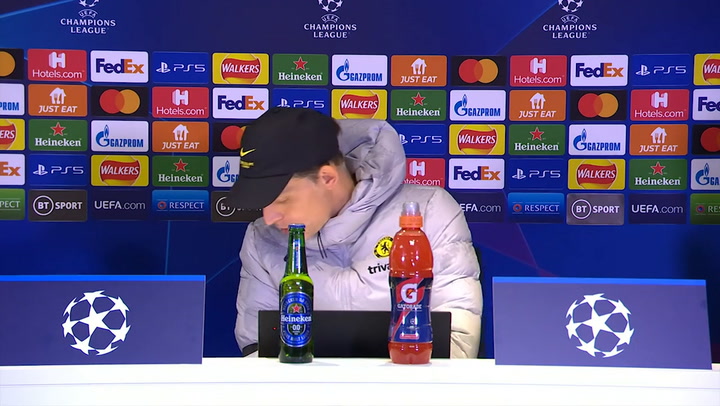 Chelsea were humbled by the news Romelu Lukaku will miss at least two to three weeks of action, after suffering an ankle injury in the Blues’ 4-0 victory against Malmo in the Champions League.

Lukaku was surprisingly started against the Swedish side by Thomas Tuchel, who had previously hinted the Belgian was in need of a rest.

But, the former Borussia Dortmund and Paris Saint-Germain manager instead opted to deploy what could be argued to be his strongest starting eleven.

Unfortunately, despite a brace of penalties by midfield general Jorginho, as well as goals from Andreas Christensen and Kai Havertz securing a routine victory, both Lukaku and Timo Werner limped off the pitch.

However, Lukaku’s absence, which could see him miss Chelsea ’s next five matches against Norwich City, Southampton, Newcastle, Malmo, and Burnley, will be a huge blow to the club.

How much of a loss will Romelu Lukaku be to Chelsea this season? Comment below

The £98million summer recruit hobbled off the pitch after winning Jorginho’s first penalty against the Swedes.

After spinning the Malmo defence, Lukaku bared down on goal before a last-ditch tackle from defender Lasse Nielsen resulted in the 28-year-old’s ankle being tangled within his legs.

While the challenge was anything but malicious, the awkward way his ankle got caught in a pincer like tackle looks to have side-lined Lukaku.

After the contest, Lukaku was seen departing Stamford Bridge on crutches as a precaution.

It is believed by the Telegraph the Belgian has undergone scans, however, the amount of swelling on his ankle since the challenge means they are not yet sure how serious the challenge is.

Initial assessments have reportedly claimed he will miss at least two or three weeks of action, which would see him consigned to the side-lines until the next international break.

However, Lukaku’s agent, Federico Pastorello said he was concerned as soon as Lukaku stayed on the ground after the challenge.

“I was very worried because Romelu is a player who really wants to play and the fact he stayed lying on the pitch so long after the penalty, it doesn’t look good to me because he is someone who immediately stands up,” said Pastorello.

“But if you see the pictures and the video of the injury, the position of the ankle is really under the weight of the body.

“But he is a strong boy and he wants so much to play every game so he will be back stronger soon I am sure.”

Speaking to Sky Sports, Pastorello added: “He was very sad actually yesterday as a first reaction but everybody was seeing he was playing a good game and I am 100 per cent sure he would have scored goals [had he stayed on].

“He was on fire, but he is really concentrated and will be focused on his recovery as soon as possible.

“He has his physio at home so he is working hard every evening even before he goes to sleep so if there is a time to come back it will be earlier than planned.”