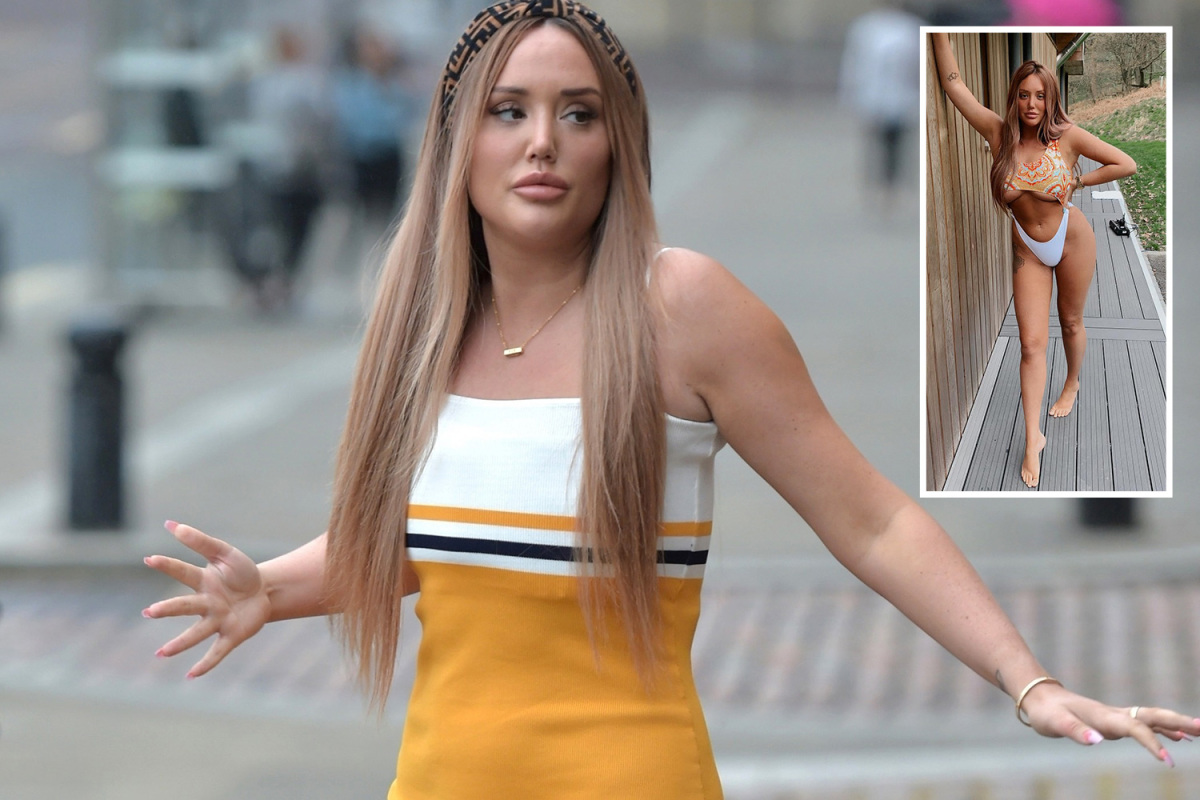 CHARLOTTE Crosby has been spotted for the first time since a health scare forced her to remove her breast implants.

The former Geordie Shore star showed off her natural curves as she stepped out in Newcastle to celebrate her 29th birthday with family.

She paired the bright dress with see-through heels and a quirky headband and snogged her boyfriend Josh Ritchie outside the Tomahawk steak restaurant in Newcastle.

Charlotte was forced to have the op after finding herself in excruciating pain when her boob went hard.

Earlier this week, Charlotte paid tribute to her “big balloons”.

And when boyfriend Joshua Ritchie shared a throwback snap of the couple on the beach, it prompted the reality star to pay a sentimental tribute to her former boobs.

She wrote beneath his snap: “The last holiday with them big balloons.”

Her comment racked up over 120 likes on Tuesday and Joshua jokingly replied: “the two life jackets” alongside a couple of laughing emojis.

Charlotte has had her boob implants removed after suffering weeks of agonising pain in her breasts and is currently in recovery, The Sun Online can reveal.

The reality favourite had the op this week after returning from a trip to Brazil with boyfriend Josh – with a big reveal being planned for her MTV reality series.

A source close to the star explained: “Charlotte has been in quite severe pain with her breasts, one in particular.

“She saw a specialist before Brazil and he diagnosed severe inflammation and capsular contracture – which is when the scar tissue around the implant inside the body gets tight and hard.

“This can cause chronic pain and hardness which was what Charlotte was experiencing. As a precaution she has also been referred for breast scans to ensure there is nothing else going on.”

Charlotte originally had an op to correct her symmastia – the so-called ‘uniboob’ where breasts merge across the breastbone – in 2017.

However, she had implants put in at the same time as fixing the problem, which she was born with, and now wishes she hadn’t.

The insider explained: “She bitterly regrets having implants at the same time. Those implants have been removed and Dr Hassan has tried to fix the symmastia for a second time.”

Our insider added that the timing of the surgery will mean Charlotte spending a long stretch at home laid up at home recovering.

That caused her to have the procedure this week and cover it on The Charlotte Show when it airs later this year.

THE ONLY WAY IS UP

Josh has been by her side throughout the ordeal, supporting her through the surgery.

Charlotte has had surgical procedures before, including a nose job in 2016.

She and Josh combined their luxury holiday with promoting The Charlotte Show, the series where TV viewers will get to see the results of her procedures.

Charlotte shot to fame in 2011 when she signed up to reality series Geordie Shore, which she quit in 2016.