If you think you’ve had a weird date experience, we’re sorry to tell you Charlize Theron can top them all – one potential boyfriend made her snog his nose.

No, that’s not a typo. He literally made her make out with his nose and we’re not sure how to feel about that.

The Bombshell star, 44, revealed the gruesome story on Jimmy Kimmel Live!, telling the host: ‘Oh god… So I went on a date in my 20s with this guy who was really super handsome, I was like really into it.

‘And he picked me up for dinner, we went and had dinner and it was lovely. I was like “this is going really well”.

‘And he drove me home and I kind of signalled that I was in for a kiss. He pulled over by my house, and we started kissing, and it was really good.

‘And then he pulled away and whispered: “Make out with my nose.”’

Charlize was seen visibly cringing and collapsing in laughter at the memory, as Jimmy asked her whether the guy was serious or whether it was a very bizarre joke.

She confirmed it was oh so serious, explaining: ‘I swear on my life, I’ve never forgotten it because I’m yet to meet another person who likes to have somebody make out with their nose.’

However, because the guy was such a hotty and the date had gone well, Charlize decided to try and go along with it.

She admitted: ‘He was like really into it and I started giggling and, because it was good and I didn’t want to mess it up, I gave him like a little peck on the nose and he was like, “No, make out with it.”’

Well, we hope the nose snogger found someone who likes to make out with their nostrils, because it sounds like Charlize wasn’t the one…

MORE: Charlize Theron fangirling over The Bachelor gives us hope in a dark world

Eddie Large death: 'Not being with him as he died the hardest thing' 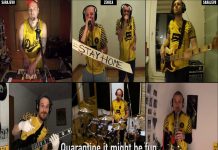