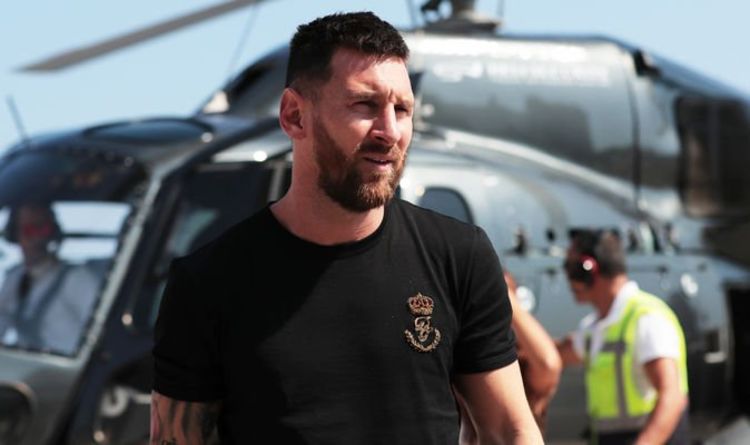 16:30: Well would you look at that. Someone in the offie (I genuinely don’t know who) ran a mock simulation of today’s draw. Chelsea supporters will be hoping this doesn’t come to fruition.

16:25: Presenter Reshmin Chowdhury will conduct the draw alongside the incredibly rectangular-headed Pedro Pinto this afternoon.

It’ll be her third time on doing the honours and she’s marked it with a piece in The Sun today. And she’s treated us to a story from 2017.

“I remember standing backstage with Luka Modric and Sergio Ramos in 2017, who I knew well from my time working at Real Madrid,” she wrote.

“I went out and hosted the draw, which happened to group Madrid and Tottenham together, and Modric caught up with me after and said: “I knew it would be Spurs!

“Then Ramos tapped me on the shoulder and said: “Tottenham is your team, isn’t it?

“He was quickly followed by Florentino Perez, who grinned at me mischievously and said: “Ahh, we’re playing your team so we need to talk tactics.”

16:20: Well there’s me thinking Liverpool’s win over Tottenham would herald a new era of English dominance in the Champions League.

Spanish clubs have won five of the last six Champions League titles – but last year hinted at a passing of the torch.

Not so according to Reds boss Jurgen Klopp.

“The groups will be incredible. I have no clue who will win the Champions League,” Klopp said. “We have the same chance like everyone else, but that is all, and no I don’t see us, the English teams, dominating.”

The club they all want in the #UCLDraw!

16:10: Zenit’s social media team are doing a stupendous job, again. The Russian champions are top seeds for today’s draw – and are clearly the side everyone would love to get.

This seems as good a time as any to explain how the draw actually works.

The 32 teams will be drawn into eight groups of four, with a team from each seeding pot in a group.

Teams from the same national association cannot be drawn together in the same group. So Barcelona and Real Madrid can’t meet at the group stage. Same goes for Liverpool and Chelsea.

16:00: The good and the great are arriving at UEFA HQ in Monaco now.

I’m seeing pictures of Lionel Messi arriving in a helicopter, Frenkie de Jong alongside his girlfriend and Virgil Van Dijk looking like the coolest man in showbiz.

Pictures below for you to peruse at your leisure. FYI – keep an eye out for the fella who’s totally ruined another bloke’s picture of Messi.

15:50: Time for the important stuff. As you’ll know – the clubs are arranged into different pots for the draw. The pots and seedings are as follows:

And look – I’ve even put a generic stock image in below to demonstrate what I’m talking about. Plenty more of those on the way.

It’s colourful… and… has lots of nice little stars emblazoned on it. Oh and it’s round.

After a brief Google search I can tell you that the ball costs about £30. It’s also lucky enough to have its own description that will probably be better than my obituary.

“Its hard-wearing TPU cover is machine stitched for durability. The electrifying design reflects the fervour of fans around the world,” UEFA said.

15:30: Hello everyone and welcome to our LIVE coverage of the Champions League draw.

Well what a pleasant treat for a mundane Thursday afternoon in the office. I was expecting to watch Tipping Point followed by The Chase – but I’ve been spared an hour of Ben Shephard.

I’ll put that in the win column.

Anyway, we’re here for another afternoon of fun and games with UEFA to learn the fate of the Premier League’s four representatives.

Should be a bit of drama, a few speeches and montages galore. Buckle up – we’re just getting started.

When is the Champions League draw and how can I watch?

The group stage draw for the Champions League takes place in Monaco on Thursday, August 29.

UEFA have confirmed it will take place from 5pm UK time.

The draw will be streamed on UEFA’s website and will also be shown on BT Sport.

Express Sport will bring you complete coverage as well with all the reaction and aftermath to follow.

Teams from the same country cannot be drawn together in the group stage.

There will be four seeding pots with Pot 1 consisting of the holders (Liverpool), the Europa League winners (Chelsea) and the champions of the six highest-ranked nations including the Premier League.

Pots 2, 3 and 4 are then determined by the club’s UEFA coefficient ranking.