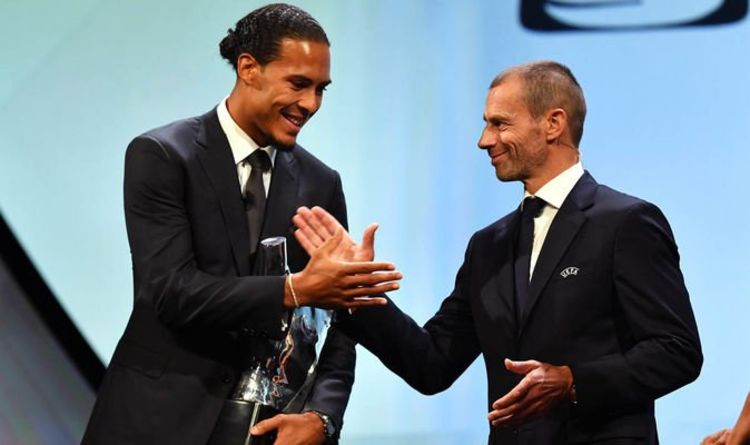 Virgil van Dijk was the big winner from the UEFA Champions League awards, picking up the Player of the Year accolade ahead of Lionel Messi and Cristiano Ronaldo.

The Liverpool ace also scooped the Defender of the 2018/19 UEFA Champions League Season while his Reds team-mate Alisson won the Goalkeeper of the Season award.

Frenkie de Jong claimed the Midfielder of the Season prize for his performances during Ajax’s run to the semi-finals and Barcelona star Lionel Messi was crowned Forward of the Season.

Lucy Bronze picked up the Women’s Player of the Year, but it was Van Dijk who caused the big upset with his dominant displays at the heart of the Liverpool defence earning enough votes to see off both Messi and Ronaldo for the top honour.

“I need to thank my teammates, without them I would not have achieved what I have achieved,” Van Dijk said after picking up his award.

“It’s been a long road and it’s part of my journey. I’m very proud to get this trophy.

“It’s credit to everyone who has helped me. I wasn’t 18 and went straight to the top. I had to work every step of the way.

“I looked up to Ronaldinho a lot growing up. He enjoyed his play with all his tricks, it was a great feeling to watch him play.”

The Champions League draw ceremony took place in Monaco this afternoon, with the elite of European football learning their group-stage opponents for this year’s tournament.

The event was also an opportunity for UEFA to hand out their annual awards, recognising the best performing players in each position throughout the previous year.

As well as the best goalkeeper, defender, midfielder and forward, UEFA selected the best Men’s and Women’s Players of the Year and handed the President’s award to Manchester United legend Eric Cantona.

Shortlists for every category were selected by a jury comprising of the 80 coaches of the clubs that participated in the Champions League and Europa League last season, as well as 55 prominent journalists who were also handed votes.