Cats Review: Ignore the Haters, Enjoy the Music and Dancing 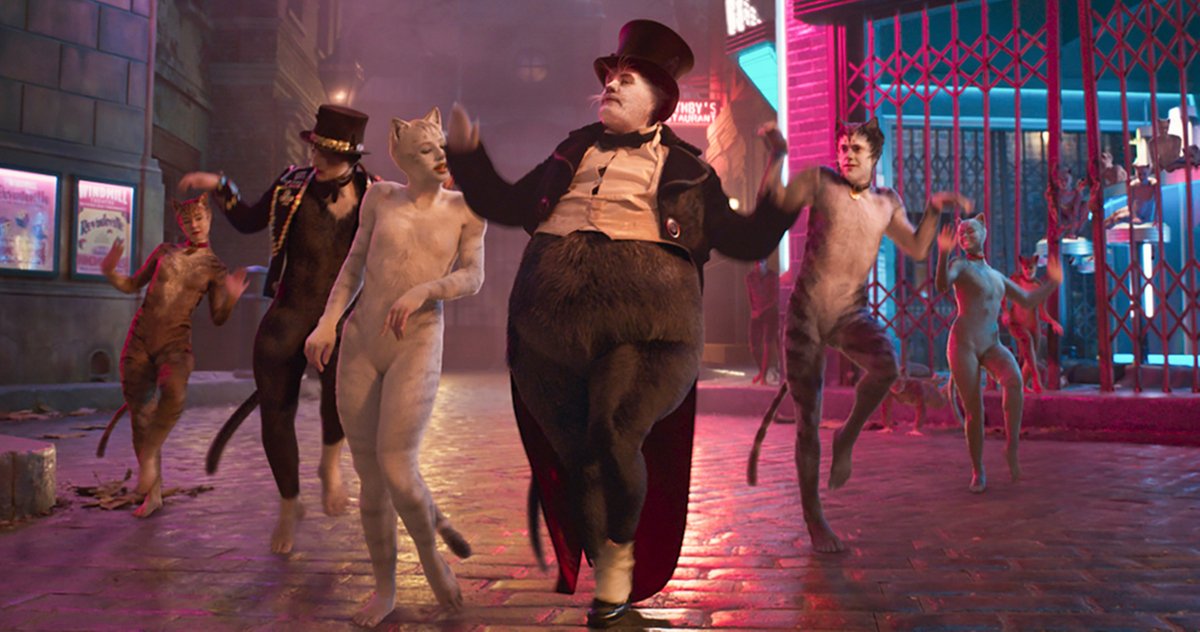 Director Tom Hooper has lumps of coal filling his Christmas stocking. His feature adaptation of Cats, Andrew Lloyd Webber’s hit Broadway musical, has been treated like a lost stray. The film has unfairly received withering criticism. The poor feline ensemble sits at a paltry 17% on the aggregate website Rotten Tomatoes. Negativity towards the film grew after an admittedly bad trailer. The pile on resulting in a dismal opening box office of $6.2M. I’m here to defend Cats. Ignore the barrage of haters. Cats is not litter box material. If you liked the musical, you will like the film. If you appreciate incredible choreography, classic songs like “Memory”, and whimsical performances from an all-star cast, Cats is an enjoyable Holiday treat.

Cats has a simple narrative. The plot is based on a 1939 book of poetry by T.S Elliot, “Old Possum’s Book of Practical Cats.” A frightened Kitten, Victoria, played wonderfully by prima ballerina Francesca Hayward, is dumped in a London alley. She’s quickly surrounded by a gang of street cats called the “Jellicles.” They sing “Jellicle Songs for Jellicle Cats” to introduce themselves. They include Skimbleshanks, Jennyanydots (Rebel Wilson), the thieving Mungojerrie and Rumpleteazer, the chubby Bustopher Jones (James Corden), and kind hearted, magical Mr. Mistoffelees (Laurie Davidson); who takes a liking to the terrified newcomer.

Victoria has come to the Jellicles on an auspicious day. Old Deuteronomy (Judi Dench), their wise matriarch, is hosting the annual Jellicle Ball. Each cat tries to win her favor and be chosen to enter the Heaviside Layer, where a street cat’s life will begin anew. The Jellicles are constantly attacked by the magical, but devious Macavity (Idris Elba). His followers, the mean Growltiger (Ray Winstone) and fetching Bombalurina (Taylor Swift), want to ensure Macavity’s ascension. But as all the cats sing and dance for Old Deuteronomy, Victoria notices the sad and downtrodden Grizabella (Jennifer Hudson). Taken by her tragic “Memory”, Victoria believes Grizabella is the most deserving cat.

READ  Yesterday: What the surviving Beatles REALLY think of new movie about their music

RELATED: Cats Movie Has Taylor Swift in Love with Its Weirdness

Cats unique production design and costumes have been pandered. I agree they’re a bit odd, but certainly grows on you as the film progresses. You need willing suspension of disbelief to watch a live action movie about singing cats. The actors costumes and make-up effects are enhanced by CGI. They look like cats with frisky ears and tails. They are also cat-sized. This means the sets are huge. They sing and dance under towering trash cans, tables, etc.

Cats is a musical fantasy and should be accepted as such. The filmmakers have succumbed to criticism of the visual effects. In an unheard of move, Tom Hooper is sending a new edit with enhanced effects to theaters for Christmas Day. I saw Cats weeks ago at a press screening. The cut I saw was fine, and appreciated by the audience. My note to Tom Hooper, there’s no need to fix the CGI. Complainers make the most noise. By acknowledging them, you empower the grievance machine.

Cats is wall to wall singing and dancing. Normally that’s not something I find interesting, but I loved the Cats Broadway musical as a kid. Everything that I found entrancing as a child is represented on screen. Andy Blankenbuehler, who also choreographed the stage revival of Cats, does excellent work. Francesca Hayward, in her first film role, is an exquisite dancer. She’s been singled out for her “one-note” performance. I disagree, she plays Victoria as meek. The whole point of Cats is her journey to acceptance by the Jellicles. Jennifer Hudson absolutely nails the showstopper climax of “Memory.” Taylor Swift, an artist I really don’t know, captures the saucy Bombalurina. The ensemble cast successfully recreates the magic of Cats.

Tom Hooper (The King’s Speech) needed better transitions between the musical numbers. This primary flaw is what I believe leads to the mountain of hate heaped on the film. There’s very little narrative flow. The Broadway show is a spectacle. Hooper embraces that philosophy. He goes full force on the song and dance. Hooper could have shaved off lesser numbers, a few Jellicle characters, or added a narrative voice over. It would have made the film less jarring from scene to scene.

I was surprised by the level of nastiness and vitriol towards Cats. Critics sharpened their claws when they saw others on the attack. It’s all overblown. Cats has its flaws, but is not terrible. It’s much better than the so called rotten rating indicates, which never allows for nuance in reviews. Cats is a worthy musical. I will reiterate, if you liked the musical, you will like the movie. Cats is a production of Working Title Films and Amblin Entertainment with distribution by Universal.

The views and opinions expressed in this article are those of the author and do not necessarily reflect the official policy or position of Movieweb.

Film critic, raconteur, praying for dolphins to grow thumbs and do better.