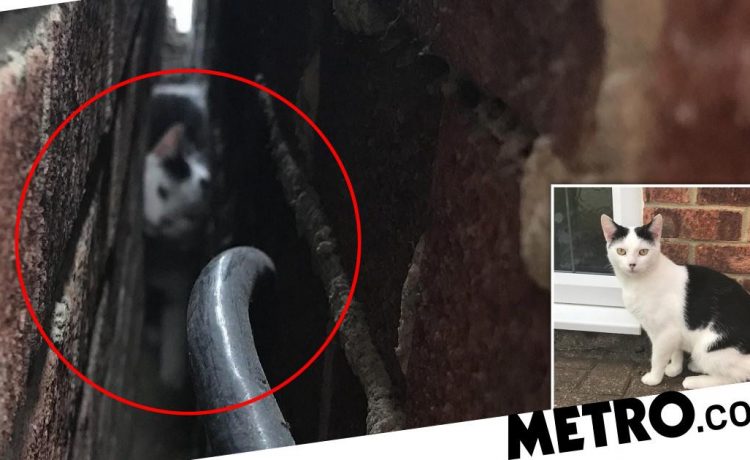 A distressed cat was freed from a minuscule space between two homes after a woman let rescuers break through her garage wall.

The unusual rescue operation was launched after Kevin became wedged in a three-inch gap after a suspected fall from a roof.

Initially they were unable to reach the black and white animal, even with Cleveland Fire and Rescue’s best equipment.

The charity’s animal rescue officer, Shane Lynn, said the owner of the garage in Middlesbrough ‘kindly’ let firefighters remove some bricks near where he was trapped.

Shane said: ‘His owners were extremely grateful to see him.

‘It turns out Kevin moved into the neighbourhood with his owners only four weeks prior to his adventure – so he has already made quite the first impression in the area.

‘Kevin had fallen into such a tight gap his body was squashed into a width of about three inches.

‘He really was unable to move and was obviously very frightened and we think he had been there a couple of hours. It then took a further two and a half hours to rescue him.

‘Often in these situations we use specialist poles to grasp trapped animals but in this case we could not reach the cat.

‘It was decided the only way to free him would be to go through the garage wall which the homeowner kindly agreed to.’

A trip to the vet showed Kevin had only suffered a swollen knee and his microchip meant he could be reunited with his owners who live nearby.


MORE : Fire Brigade had to cut off cat’s tail to rescue it from the sofa