‘Let’s hear it for the crinkly mum tums!’ Casey Batchelor sizzles in a blue bikini on Lake Como trip as she vows not to airbrush her ‘marks’ in candid post

By Rianne Addo and Natasha Hooper For Mailonline

And Casey Batchelor proudly embraced her ‘mum tum’ as she vowed not to airbrush her ‘marks’ in a candid post shared to Instagram on Thursday.

The reality star, 35, who shares two young children with her fiancé Dane Goodson, looked sensational as she slipped into a blue bikini during a pool session on her Lake Como trip. 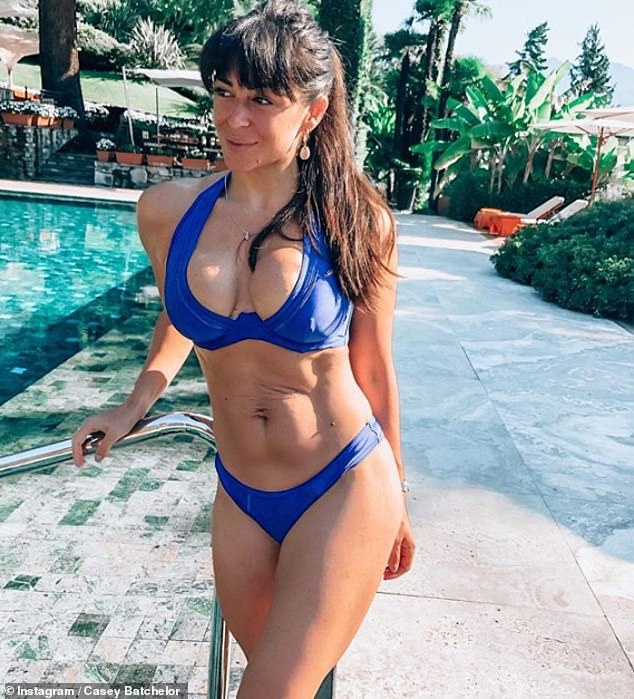 Toned: Casey Batchelor looked sensational as she slipped into a blue bikini during a pool session on her Lake Como trip in a photo shared to Instagram on Thursday

In a lengthy caption, the former glamour model spoke about feeling confident about her post-baby figure.

The TV star wrote: ‘Real Mum Tum Alert!! Am sure I’ll get some snarky comments for posting this because – shock! – after having two babies no I definitely don’t have the perfect smooth stomach.

‘There’s the dreaded crepey crinkles and the ‘sad’ belly button. But I’m not about to airbrush away my mummy marks! And I’m proud of the fact I’ve managed to blitz away the extra padding I put on!

‘My abs are slowly coming back too and although I know my body will never be quite what it was before I’ll happily trade that pre-baby bod for my gorgeous girls any day. 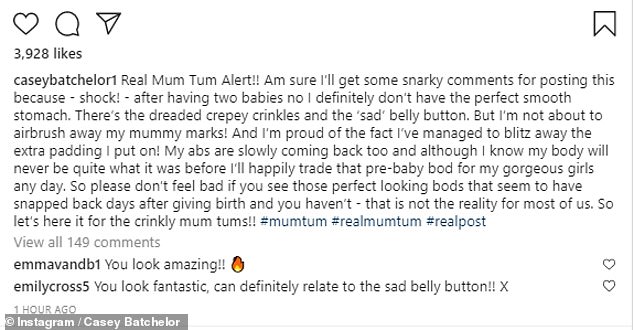 READ  PICTURED: Belcourt Of Newport castle where Jennifer Lawrence is rumored to be tying the knot

Defiant: The reality star and mum-of-two, 35, proudly embraced her ‘mum tum’ as she vowed not to airbrush her ‘marks’ in a candid post 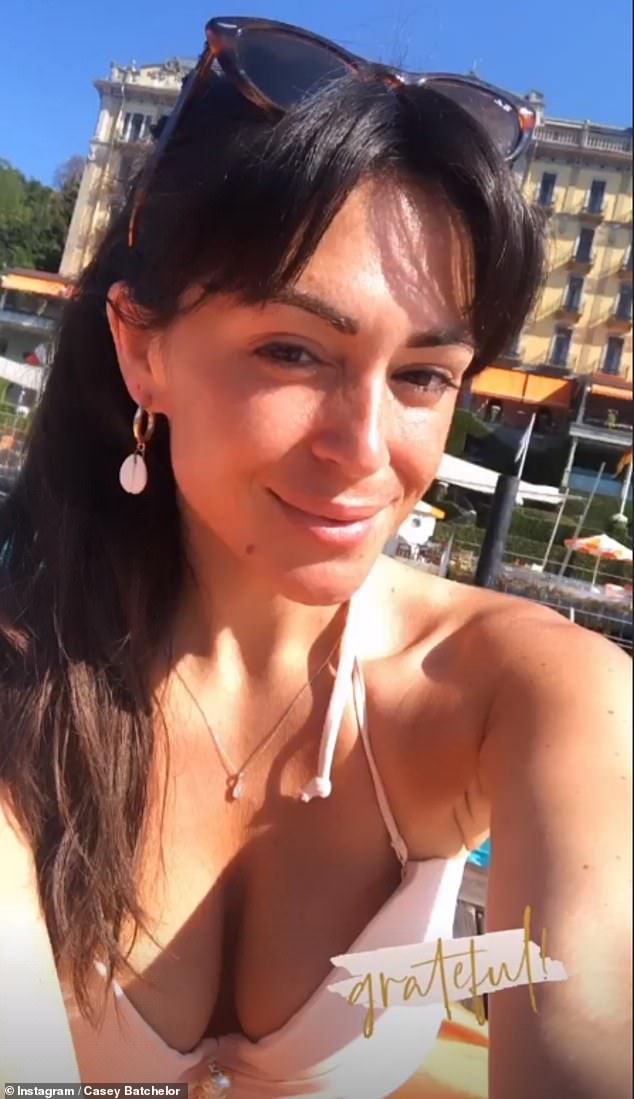 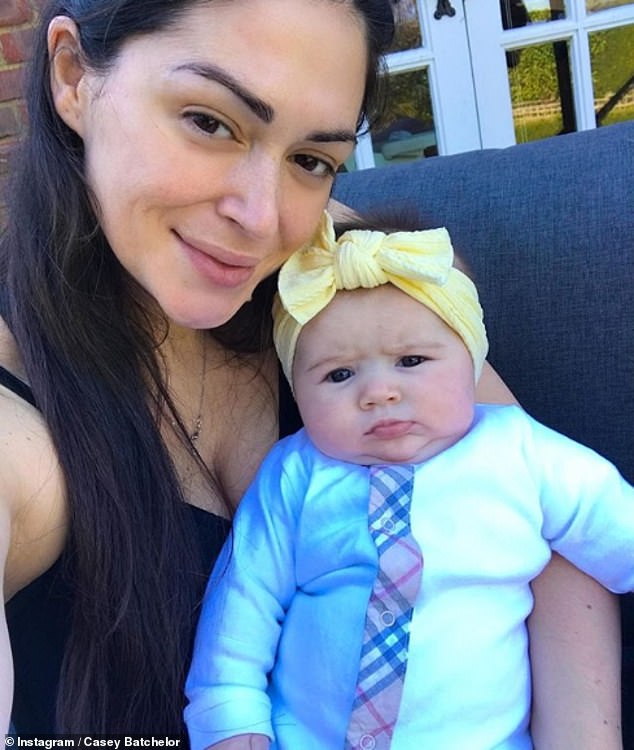 Transformation: Following the birth of her daughter, Sadie, nine months, the TV personality began a 90-day fitness plan and displayed the fruits of her labour in the social media post

‘So please don’t feel bad if you see those perfect looking bods that seem to have snapped back days after giving birth and you haven’t – that is not the reality for most of us. So let’s here it for the crinkly mum tums!! #mumtum #realmumtum #realpost.’ (sic)

The mother-of-two is passionate about health and fitness, and she ditched alcohol in 2017 to complete a three-week course and become a yoga instructor.

The Celebrity Big Brother star was recently inspired to up her fitness game with a fierce challenge, and she unveiled her impressive weight loss in jaw-dropping before-and-after photos.

She posted a snap of the impressive transformation alongside the caption: ‘A little bit proud of myself guys!

‘Not bad for reaching this goal after being stretched twice, having two babies in two years.

‘Here’s my 90 Day Challenge results and I’ve managed to lose 2 stone in 3 months. Last time it was 4 stone in 6 months so am thrilled to be losing at the same rate as last time, even though I’ve had cheat meals and even a whole week off!

‘Am moving on to Bikini Blitz next so will let you know how I get on.’

The reality star announced the happy news that she had given birth to her second child, daughter Sadie, with fiancé Dane on January 26.

She originally announced she was pregnant with her second child in July, 14 months after welcoming first daughter Florence into the world.

The yoga instructor said although she and salesman fiancé Dane wanted to expand their family, they weren’t prepared for how quickly it would happen. 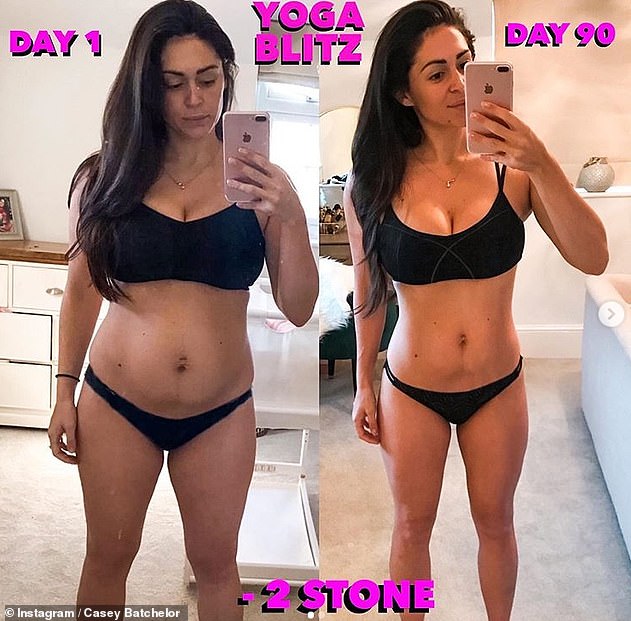 Minus two stone: The brunette is a qualified yoga instructor and she recently unveiled her impressive weight loss in jaw-dropping before-and-after photos

These 13 NFL Groups Nonetheless Will not Enable Followers at Video games, Now That The Saints Will Enable Them – KYR News