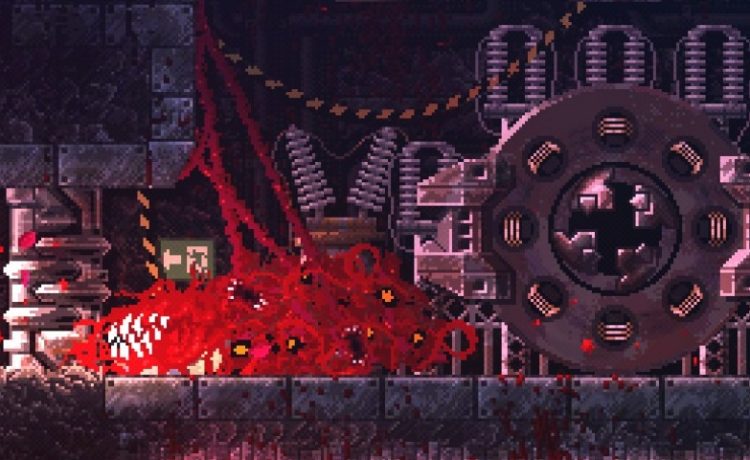 Described by its developers as a “reverse horror” game, Carrion has you take control of a monstrous figure created in a lab, breaking free and wreaking havoc on everything that gets in its way. It’s an attractive power fantasy, especially after years of sneaking past similar creatures in more conventional horror games, and it absolutely works.

In many ways, Carrion’s progression follows the same formula as Metroid and other games inspired by it: start out without many abilities, get funneled through a set path with certain areas closed off to you, and then, as you acquire more skills, return later in the game to finally access those areas. But even at the start, you’re a force to be reckoned with.

The amorphous biomass you control moves with a startling speed, sliding across the screen so fast that I felt like I was playing a hack. It works to the game’s advantage, though, making any encounters with human opponents short and violent, as even those with powerful firearms often miss the chance to fire off a single shot. To compensate for this, many weapons can take you down in a few seconds as well, incentivizing you to lay low, find an opening and then strike. Not only is it an incredibly satisfying system, but it also helps make encounters feel like scenes from a horror film, where the monster creeps up behind its prey before going in for the kill.

Even though Carrion is an undeniably violent game, it’s seldom actually disturbing. The low pixel count combined with its humans’ Wilhelm-like screams make the carnage more bearable, if not comical. It’s intentionally light on story, with barely any lines of dialogue throughout, but by the end, I couldn’t help but be on the terrifying monster’s side. Yes, it’s tearing through a small village’s worth of people, but it’s so tenacious in its quest to escape that I could feel its desperation and increasing rage, like Godzilla tearing through a city.

As you progress, the abilities you acquire usually help out in both combat and progression. For example, its smallest form can shoot out a web that’s used both to hit otherwise unreachable levers, but can also be used to ensnare your foes. Acquire enough biomass (i.e., get bigger), and you’ll trade in that ability for a deadly charge, which can break through large barriers and devastate opponents. What you can do often depends on how much biomass you’ve attained, with each level adding different strengths and weaknesses. It’s elegant and effective.


Carrion’s world isn’t as expansive as many of its peers, but that mostly works to its benefit. You’ll go through each area in a mostly linear fashion at first, later gaining the ability to travel back and pick up optional upgrades using abilities you didn’t have the first time around. It’s a bit more streamlined than most and won’t require tons of backtracking (although I did get lost once or twice), but it helps keep the pace and tension going.

There’s not much to complain about with Carrion, because it mostly sticks to what it does best. There are a few segments where you’ll play as a human examining the carnage left in your wake, but they’re quick and painless. Otherwise, it’s all killer with no filler.

When Pac-Man downs a power pellet and chases after the now-vulnerable ghosts, the satisfaction comes from switching between the hunted and the hunter. With Carrion, I wondered how Phobia Game Studio would be able to keep me interested without that dynamic. They managed it through the careful balance of giving you enough agency to feel powerful, while still requiring you to plan and act with precision to use that power effectively. The result is a razor-sharp campaign that fully put me in the amorphous shoes of its terrifying beast.

READ  In a big year for video games, these players are shifting the culture - Chicago Tribune


Carrion was developed by Phobia Game Studio and published by Devolver Digital. Our review is based on the PC version. It’s also available for Xbox One and Switch.


Joseph Stanichar is a Paste intern who specializes in videogames. He’s written for publications such as Game Informer, Twinfinite and The Post. He’s on Twitter @JosephStanichar.