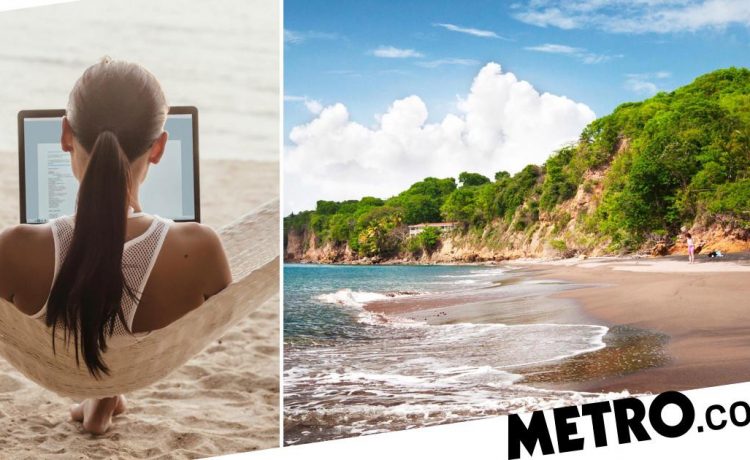 Who isn’t feeling a little jaded from their WFH set-up?

Many people are hoping to switch things up, and what’s more enticing than working under the Caribbean sun, a stone’s throw from the beach?

Luckily, the island of Montserrat is offering people the chance to come to the Caribbean with a new 12-month-long visa.

The job is ideal for remote workers who may now be able to work virtually from anywhere.

The Montserrat visa comes after a wave of other Caribbean islands offering similar visas to boost tourism and thus the economy.

Antigua and Barbuda, and Anguilla are some of the other tropical destinations boasting extended stays.

So if you’ve gone remote during the pandemic and fancy a change of scenery, it might be time to start looking into the visa.

The island’s tourism authorities say that the visa will give professionals and entrepreneurs the opportunity to experience a unique work-life-vacation balance in one of the Caribbean’s most stand-out destinations.

Montserrat’s Deputy Premier, Samuel Joseph, said about the visa: ‘The global pandemic has changed how we live and work, and as multinationals and leading startups across the world accelerate their rates of digital adoption, the need to be physically present to fulfill professional responsibilities has been redefined.

‘We know there are people in various parts of the world who now have the ability to work from home and are actively looking for a change of environment.

‘The remote worker program is not only inviting but encouraging them to come to Montserrat to work and at the same time be more than a visitor but a part of the community on one of the world’s most unique destinations.’

Montserrat has previously been devastated by volcanic eruptions but is now largely unaffected.

According to the Foreign Office: ‘Around one third of the island is virtually unaffected by volcanic activity. The other two-thirds are vulnerable. The Soufriere Hills Volcano has been active since 1995. However, there has been no major volcanic activity since February 2010.’

But there are caveats to the offer. Applicants need to show proof of full-time employment and an annual income of $70,000 (£51,364) along with health insurance coverage.

You can find out more information on the Visit Montserrat website.


MORE : What it’s like to travel through Australia’s red centre on The Ghan


MORE : Couple fined for travelling 260 miles for a Sunday roast

READ  My week of speaking – and living – Italian in Italy’s undiscovered heartland
Share on FacebookShare on TwitterShare on PinterestShare on Reddit
newsgrooveFebruary 4, 2021