Cardi B and Offset show off their $5.75 million mansion with its own GUN RANGE 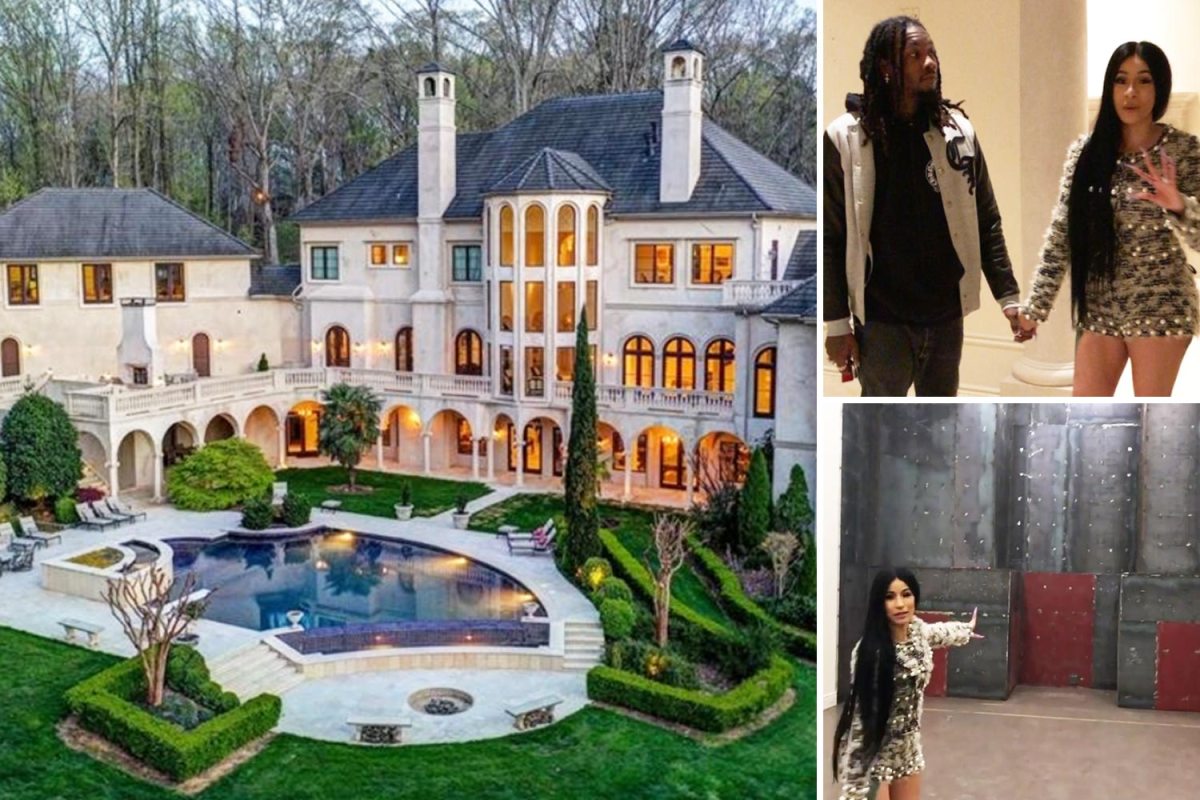 CARDI B and Offset have showed off their jaw-dropping new $5.7 million crib which has its own gun range and wine cellar.

The rappers gave their fans a tour after buying the 22,500sq ft mansion in Atlanta just in time for Christmas.

Set in six acres of private land, the five-bedroom and seven-bathroom estate has an infinity pool, man cave and massive garage.

Cardi revealed she and Offset had been hunting for their dream home for the past two years, but never found one that ticked both their boxes – until now.

She uploaded the first of seven videos showing inside the mansion using the caption: “Closing time.”

“Offset and I have been house hunting for the past two years with our realtor @b_luxurious,” Cardi added.

“It has been a roller roller coaster ! Houses that Offset liked there was always a room I didn’t like that we couldn’t agree on.

“And a couple houses that I liked Offset said NO because the areas they were in are not too good.

“We even though about building a house but with a family that’s a bit complicated.

Cardi and Offset are filmed hugging before welcoming viewers for a glimpse inside their new home.

“Look how huge it is,” Cardi says, panning the camera to show her massive living room with incredibly high ceilings.

Cardi gives a tour inside their kitchen and promises she knows how to cook.

She even joked that she’s going to start drinking wine because the mansion is kitted out with a full bar and a 1,800-bottle cellar.

Offset also shows off the garage, which he dubbed his “playground.”

In the clip, the realtor explains Offset can fit about “seven to eight cars”.

The biggest surprise is when Cardi reveals the mansion had its own gun range with steel walls.

Cardi describes the private range as the “crazy part of the house”.

The singer also showed off the backyard of the house, which features a massive pool.

It is not known exactly how much the couple paid for the house, but it’s valued at $5.795million on the Dorsey Alston realtors website.

The purchase marks an incredible transition for the singer who once worked as a stripper to survive.

Cardi – real name Belcalis Almanzar – has spoken before of her tough upbringing around gangs in New York’s Bronx.

Aged 19, she was working as a dancer in a strip club to pay for college and escape an abusive boyfriend, and by the time she was 21 she’d saved £15,000 for bum and boob ops.

Later she amassed a huge following on Instagram with videos dishing out sex tips, relationship advice and political analysis.

Time magazine named her one of the most influential people in the world last year, and in February she made history as the first solo woman to win best rap album at the Grammys.

But she has waged a high profile feud with arch rival Nicki Minaj and has a history of chucking shoes.

In January she wore a huge fur coat as she appeared in court charged with assault and endangerment over an alleged brawl at a New York strip club.

Police say Cardi had a row with a barmaid and a fight broke out in which chairs, bottles and shisha pipes were thrown last October.

READ  U.S. Air Force grounds Boeing's KC-46 tankers over debris issue
Inside Cardi B and Offset’s luxury yacht getaway – she jokes about what she’ll do to him in the bedroom when she’s surprised with rose petal romantic gestures