Call the Midwife: The angels set their sight on the Swinging Sixties 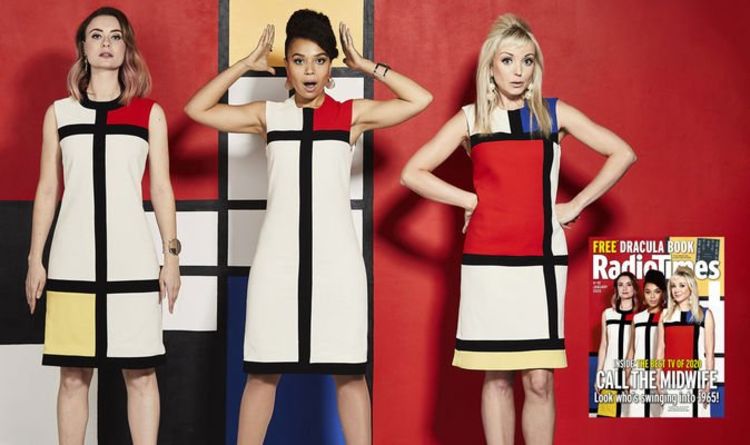 The trio appears on the cover of the latest edition of Radio Times in Yves Saint Laurent dresses from his 1965 collection inspired by artist Piet Mondrian. And inside, the creator of the hit drama tells fans the rollercoaster story is not set to end any time soon. Now in its ninth instalment, the drama, focusing on the lives of nuns and midwives working in London’s East End, begins with Sir Winston Churchill’s funeral in 1965.

Heidi Thomas said: “Call The Midwife has come a long way from the twinsets, pearls and dirndl skirts of series one. And the changes have not been confined to the wardrobe.

“All across Poplar, people’s lives have been transfigured by slum clearance, antibiotics, vaccinations, contraception, and gas and air in childbirth.

“Indeed, things are looking up so much that our fans have started fretting, ‘How much longer can the show go on?’

“They have no need to worry.”

The next series, starting in the new year, tells stories involving cancer, dementia, prostitution and homelessness.

Said Heidi: “Sister Julienne (played by Jenny Agutter) and her devoted team have more to do than ever, because change is never instant, or complete, nor is it always welcome.

“In Poplar in 1965, the ­welfare state is flourishing, but family structures are breaking down.”

The BBC has previously announced the drama, inspired by the memoirs of former nurse Jennifer Worth, will continue to air until at least 2022. Currently starring Jennifer, Leonie, Helen and Stephen McGann, it first aired in 2012.

And Heidi hailed the remote island location for this year’s Christmas special as being “possibly the most beautiful place I’ve ever been”.

The festive edition of the popular BBC show, screened on Christmas Day, saw the nuns and midwives leave London and Nonnatus House for the Hebridean islands, providing much-needed medical help for local residents.

Heidi said: “It was so magical, possibly the most beautiful place I’ve ever been.”