Caitlyn Jenner has finally confirmed one of the worst-kept secrets in showbiz – that Kendall Jenner and Harry Styles dated – and admitted she would love to see them get back together.

The Olympic gold-medal-winning decathlete, 70, revealed that Harry seemed like a ‘gentleman’, though Caitlyn had only met him briefly.

She explained: ‘I only met him one time at an event with Kendall and he seemed like a gentleman. I hear he plays golf, that’s good.’

Caitlyn said she’d like to see the pair get back together: ‘Yeah, no, she always speaks very highly of him, and, yeah, I think they did [have a good connection],’ she told Capital Breakfast. ‘I don’t know whatever happened, but yeah.’

Kendall and Harry have never confirmed or denied their relationship publicly, but it was widely rumoured that they had been an item for a short while, and were even spotted holidaying together.

Caitlyn admitted that she doesn’t always approve of the guys her daughters have brought home, but it looks like Harry passed the test.

She explained: ‘You know, I’ve got a lot of girls and would you see what they bring home sometimes, it’s just like “what the hell are you thinking?!” but I keep my mouth shut, I don’t bring that up.’

We wonder who she could mean…?!

She added that she would love to see Kendall hook up with fellow I’m A Celebrity campmate Myles Stephenson because he is such a good cook, which may mean the former One Direction star has some competition.

Caitlyn admitted: ‘Well Myles right now kind-of has first pick because he’s such a good chef! He can cook, he can really cook!’

Caitlyn is back in the UK to attend the National Television Awards which I’m A Celebrity… Get Me Out Of Here is nominated for, as well as to answer fans’ questions at a live Q&A event.

The one-day event will see Caitlyn speak about her life to audiences in Brighton and Wales on Saturday, 25 January.

Tune into Capital Breakfast with Roman Kemp, weekdays from 6am – 10am.

MORE: Kate Garraway has kept in touch with Caitlyn Jenner after I’m A Celebrity – and they’re meeting up next week

Rebel Wilson gets a parking ticket in her $300,000 Mercedes-Benz SUV in LA 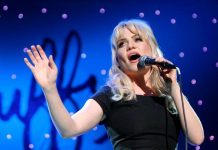 British singer Duffy resurfaces with tale of being held captive

Kim Kardashian throws a punch as fight with Kourtney gets physical