She is taking over Pamela Anderson’s role of C.J. Parker in the movie version of the lifeguard TV show.

And on Tuesday, Kelly Rohrbach showed off her fit form as she filmed scenes for Baywatch in Tybee, Georgia.

The actress and model displayed the modern take on the classic red swimsuit, featuring its new zippered front verses the classic scoop neck. 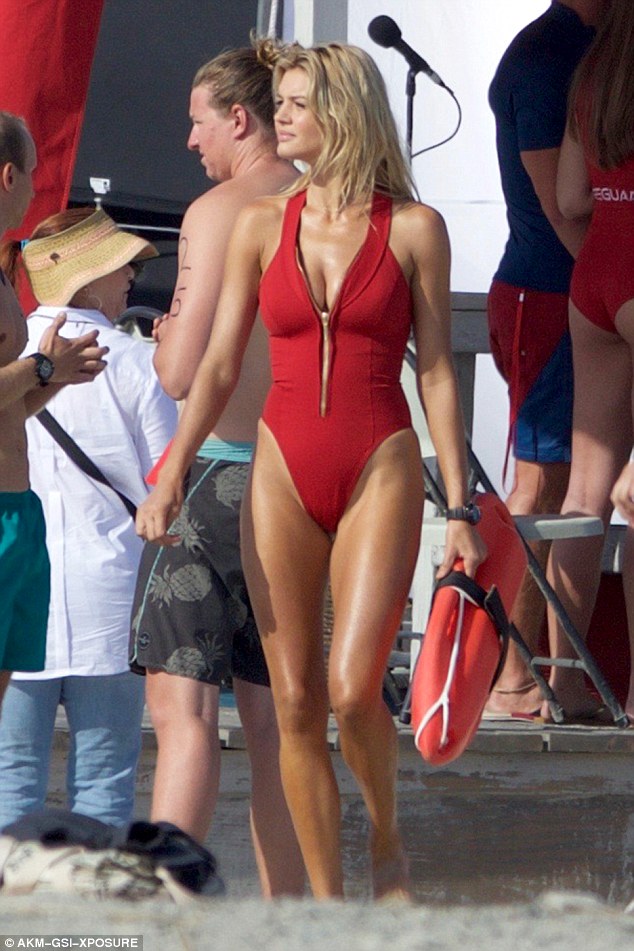 Another day at work: On Tuesday, Kelly Rohrbach showed off her fit form as she filmed scenes for Baywatch in Tybee, Georgia

Kelly casually walked along the beach, showing off her glistening skin that sparkled against the sun.

She most certainly was beach patrol-ready, as she had a lifesaver in hand.

The only accessory visible on the swimsuit-wearing model was a sporty wristwatch. 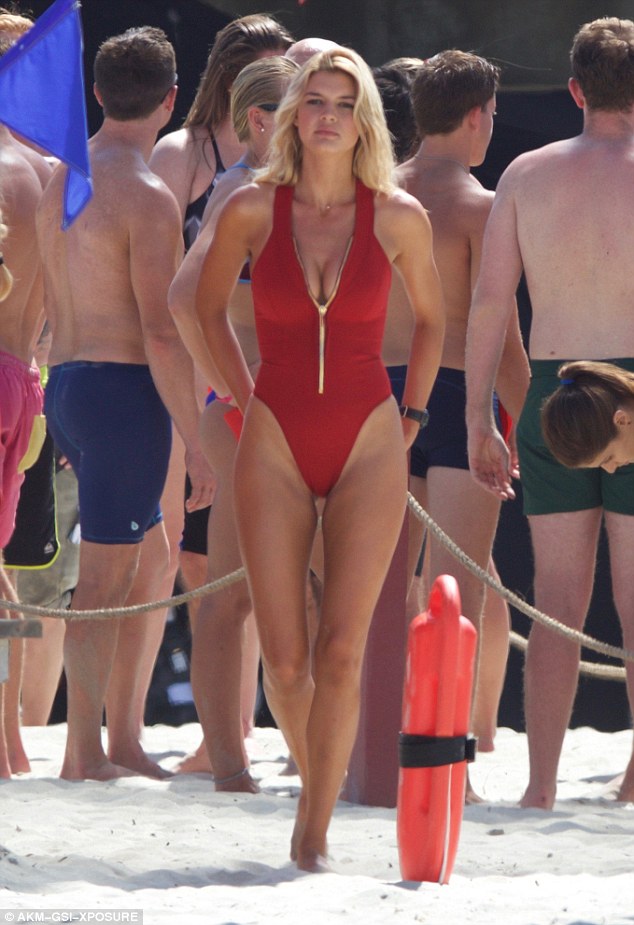 Sizzling on the beach: The blonde model strut her shapely form across the sand 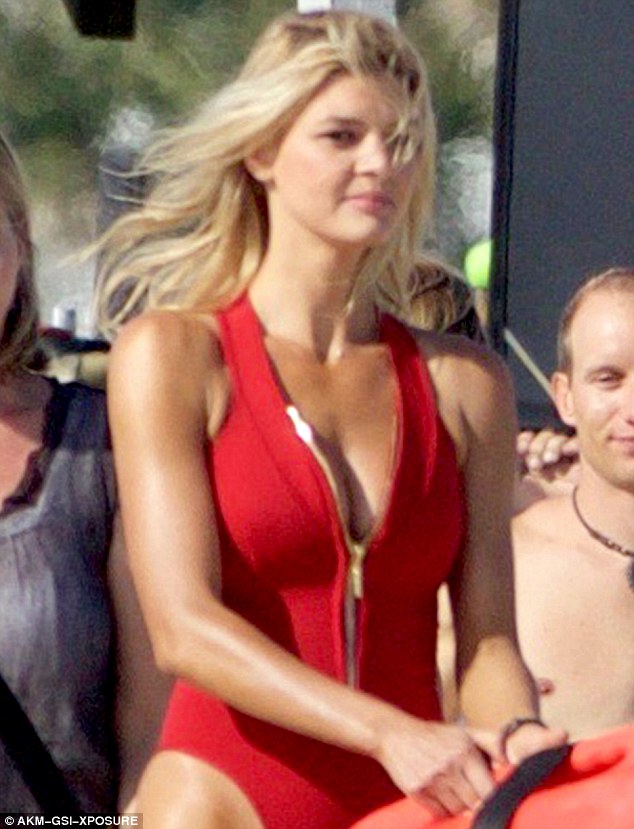 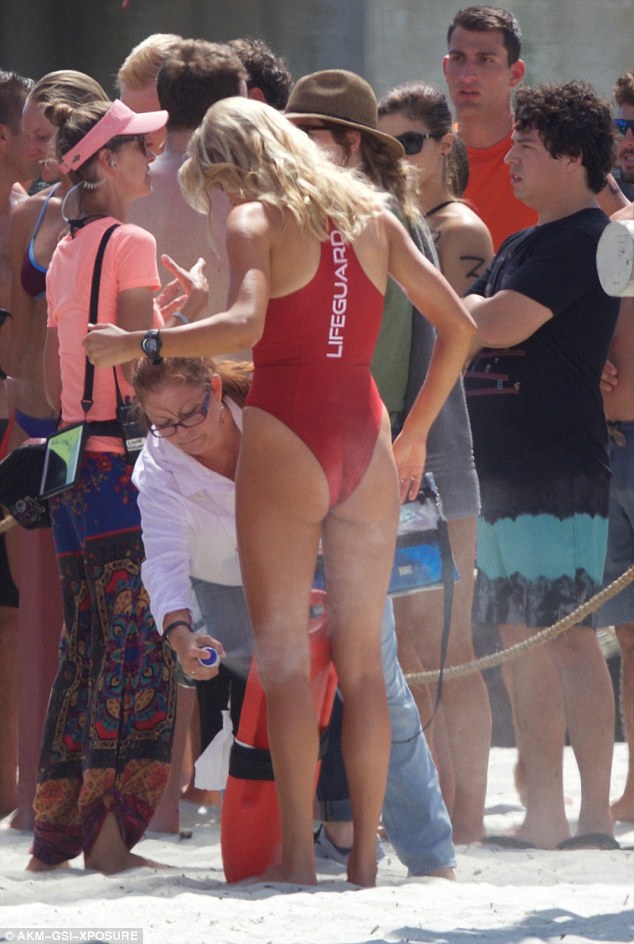 Special effects: Kelly waited patiently while a make-up artist sprayed her down

The blonde actress left her thick tresses down, flowing against the breezy air.

The stunner modeled minimal make-up, showing off her natural features.

Kelly was followed closely behind by a set hairstylist, ready to step in to tame the stunner’s tresses at any moment. 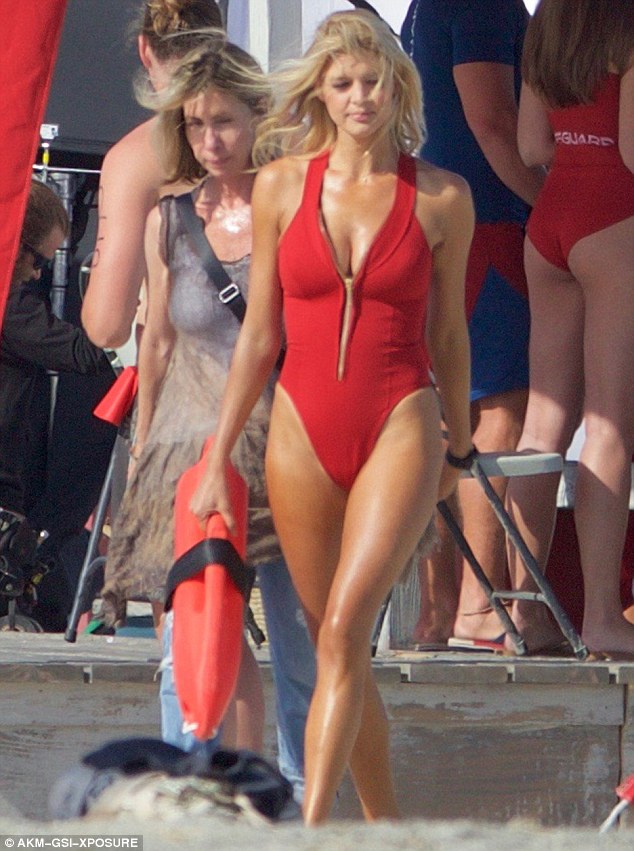 Filling in: She is taking over Pamela Anderson’s role of C. J. Parker in the film version of the lifeguard TV show

Waiting for her cue: The model-actress was ready to get to action 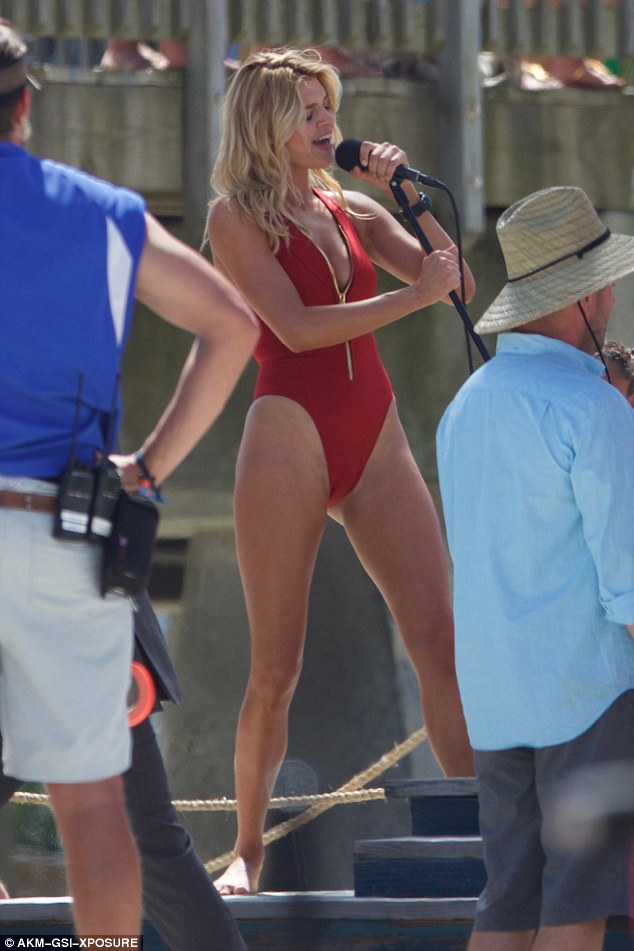 She sings too: Kelly displayed her stage presence while belting out a song in a scene 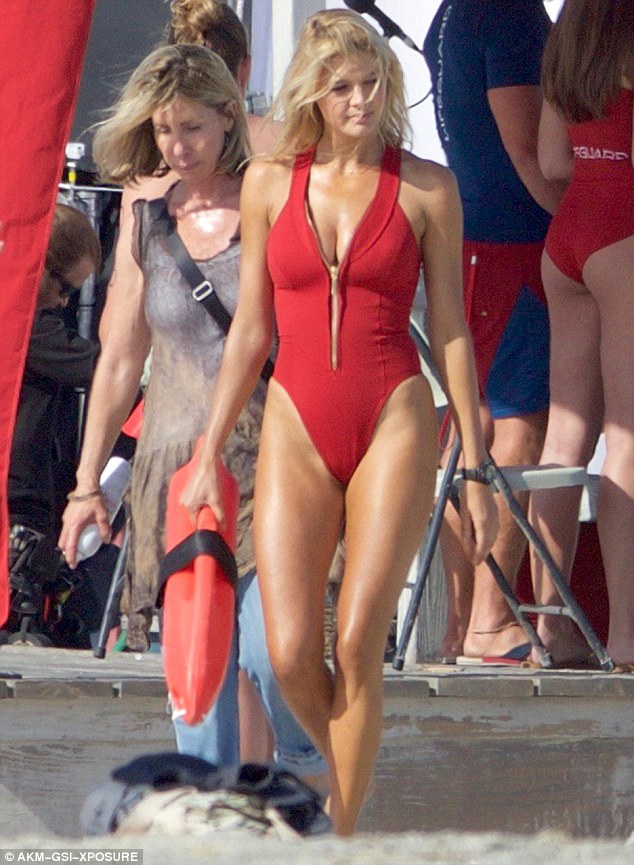 Her glow: Kelly casually walked along the beach, showing off her glistening skin that sparkled against the sun

Baywatch has been steadily filming in since March of this year, featuring a slew of attractive talent.

In addition to the flick’s main cast such as Dwayne ‘The Rock’ Johnson, Zac Efron, Alexandra Daddario and Kelly to name a few, new talent were recently announced.

On the beach: Alexandra Daddario was seen strolling across the sand wearing a sporty swimsuit 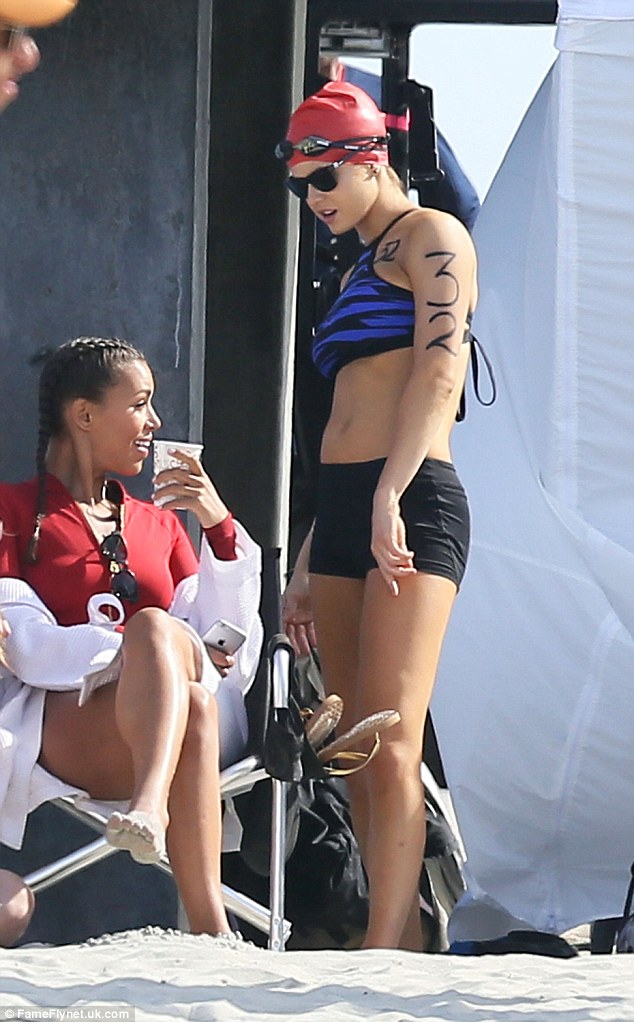 Just chilling: Ilfenesh Hadera and Alexandra Daddario appeared to be having a great time on set 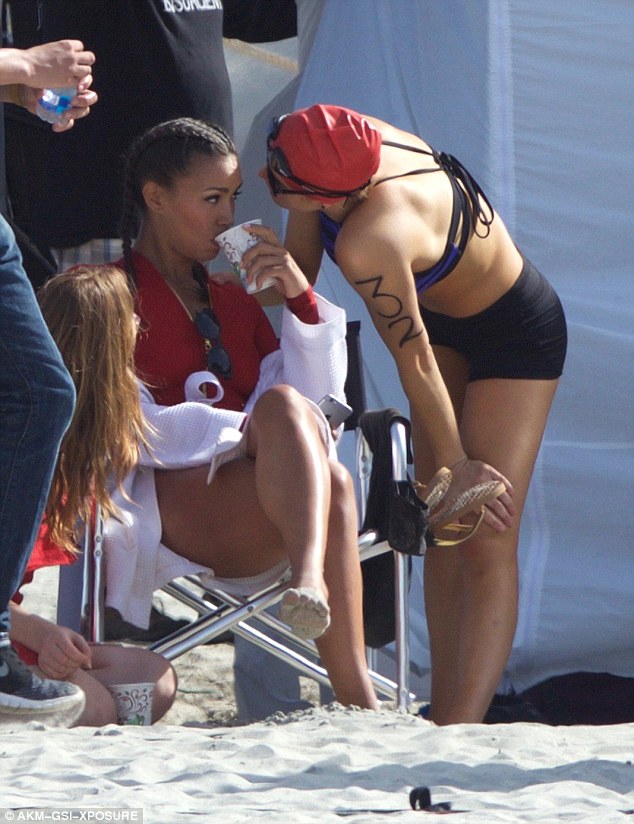 How do I look? Alexandra leaned over to say something that clearly amused Ilfenesh 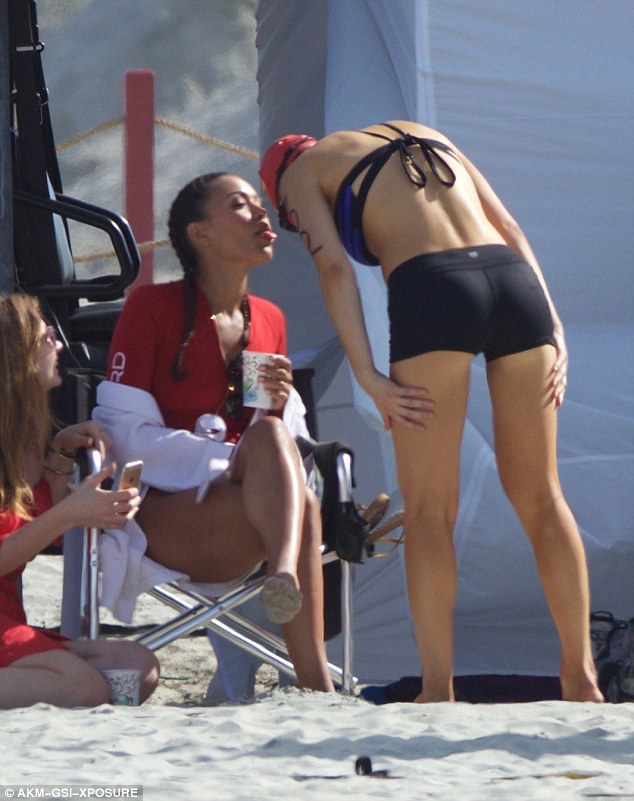 What’s going on there? Ilfenesh appeared to be sticking out her tongue 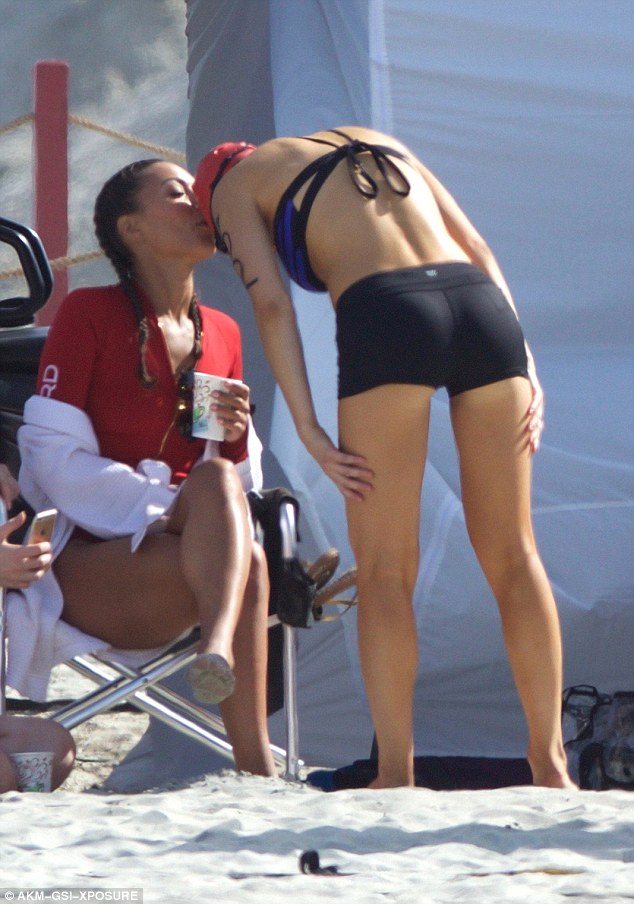 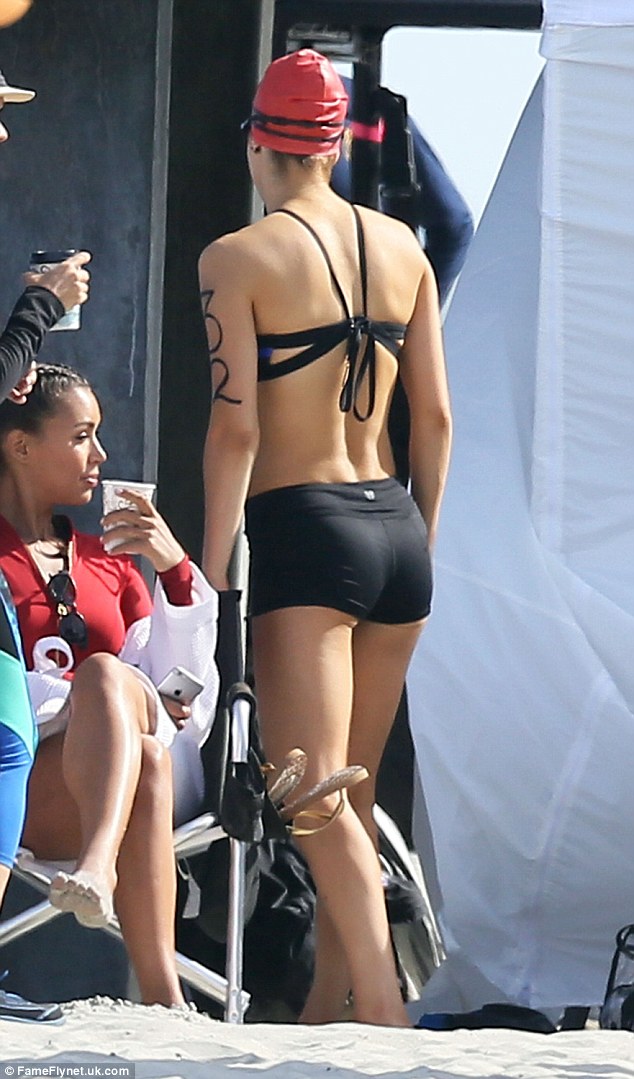 Bathing beauty: Alexandra Daddario showed off her perfect 10 figure while getting ready for the next scene

There she goes: Cameras followed Alexandra Daddario as she sprinted across the sand on set near Savannah, Georgia

Baywatch beauties Ilfenesh Hadera and Alexandra Daddario were seen getting close and playful on the set between scenes.

Hadera was relaxing in a chair when Daddario leaned over and let her co-star kiss her cap.

At another point, Alexandra was seen running across the sand in her sporty bikini that included black briefs and a blue striped halter top. 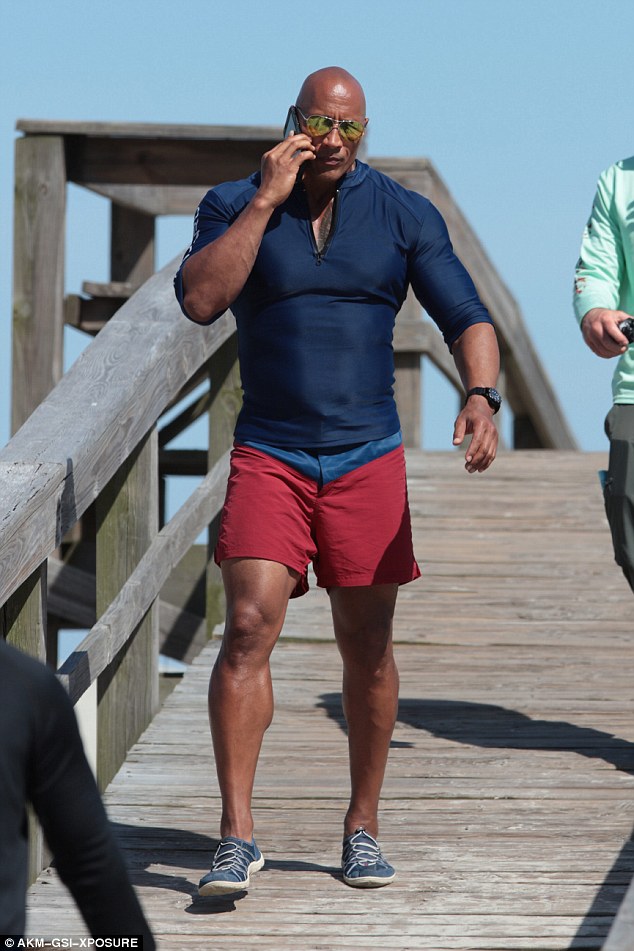 The Rock: Dwayne ‘The Rock’ Johnson strolled down a pier to the set 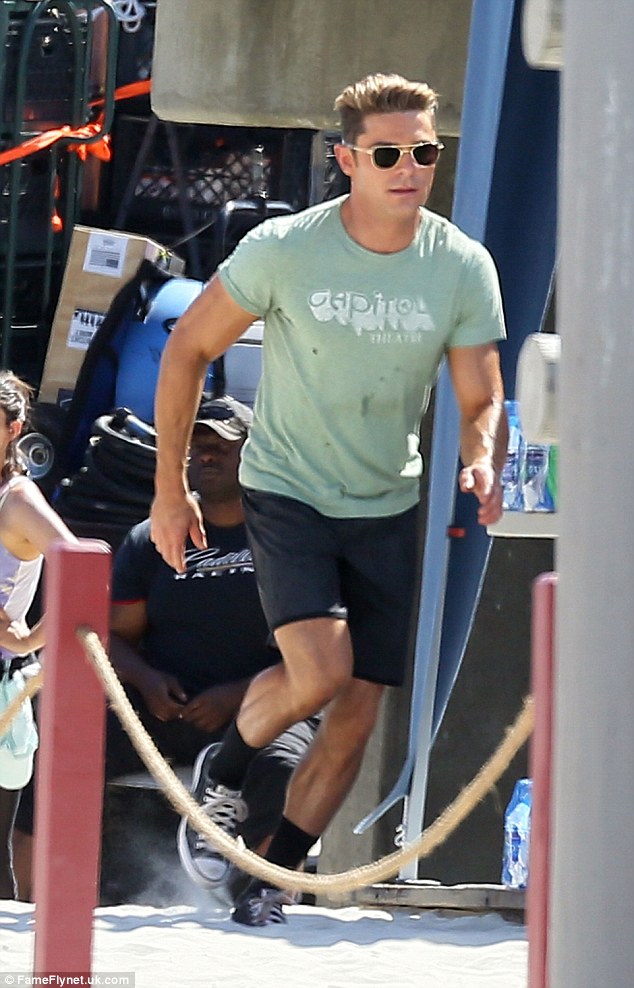 Run for fun: Zac Efron took off across the sand while looking sporty in black swim trunks and green shirt 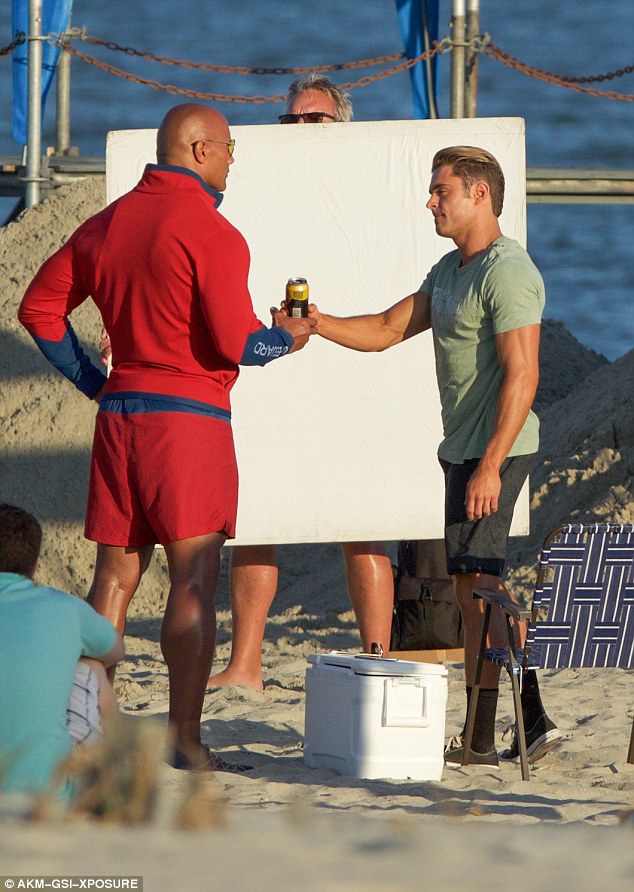 Cheers: Dwayne Johnson and Zac Efron filmed a scene in which their characters exchange words over the cooler

Zac Efron preferred to hang out with Dwayne ‘The Rock’ Johnson and the two leading men were seen filming a scene in which their characters exchange a few words over a chilled beverage.

While Dwayne rocked a red lifeguard jacket and swim trunks, Zac stood out in a green T-shirt and black swim trunks.

In another scene, Zac was captured downing the beverage in one swoop apparently. 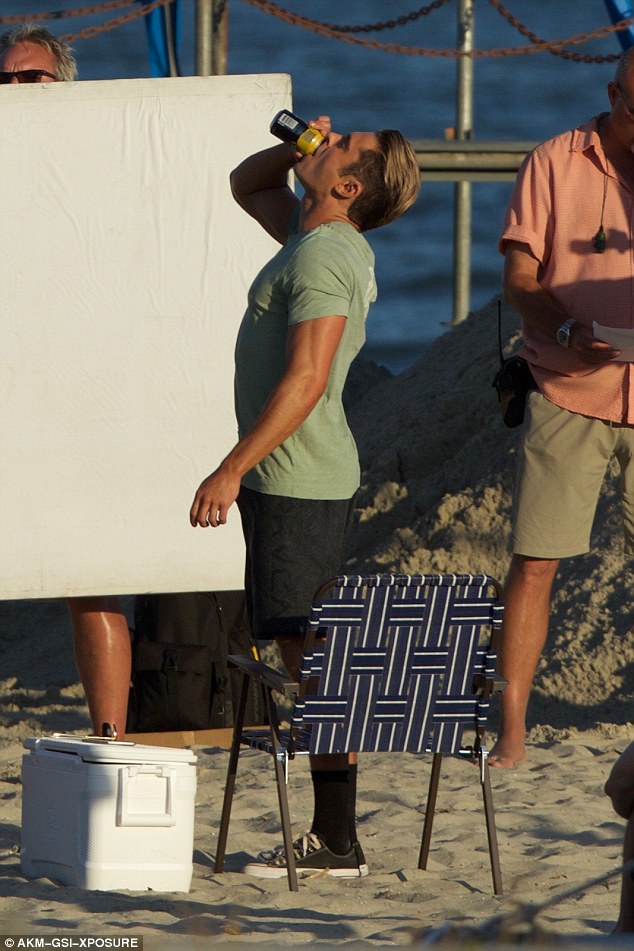 Down the hatch: Zac gulped the drink in one swoop apparently

Holly Willoughby: This Morning host opens up on fearing special day with husband

Cameron Douglas remembers late grandfather Kirk Douglas: ‘He believed in me even when maybe I had given up on myself’