Businesses under pressure in new front for Hong Kong protests 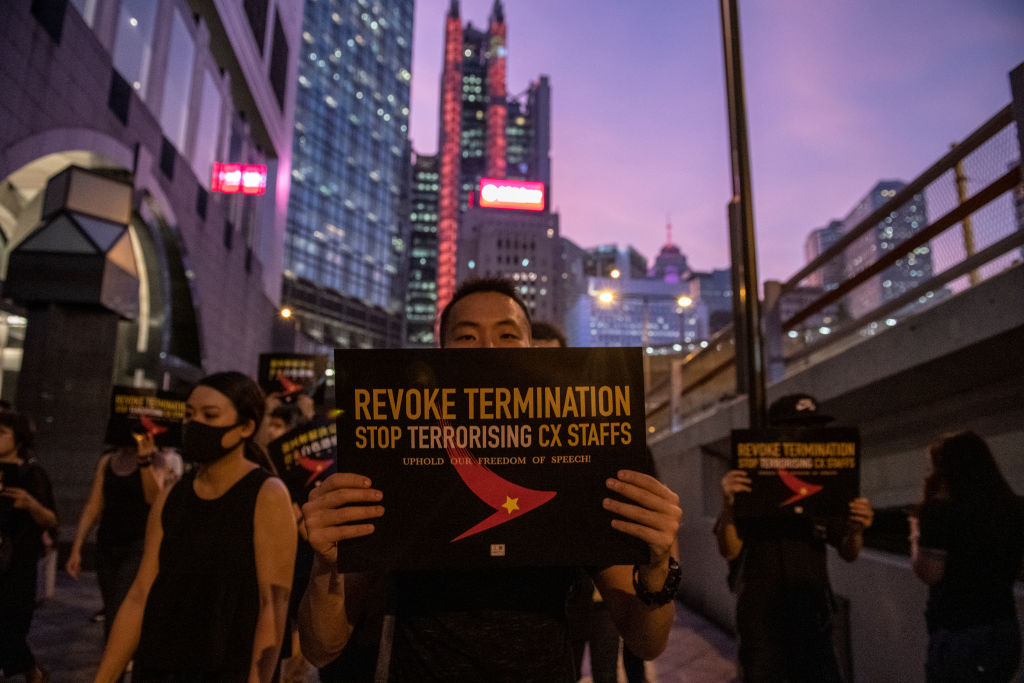 New rallies were held in Hong Kong on Wednesday, this time by members of the aviation industry and trade unions, incensed by claims that the semi-autonomous territory’s flagship airline, Cathay Pacific, has fired or forced out 20 employees over their links to the ongoing pro-democracy protests.

The Hong Kong Confederation of Trade Unions claims that the layoffs happened because of pressure from Beijing.

Cathay Pacific’s yielding to Chinese pressure is a new front in the tensions that have dogged the city for 11 weeks, but it is also a microcosm of exactly what protesters fear: that the tendrils of Chinese state power extend too far into their institutions and society, accustomed as it is to freedoms unheard of in the mainland.

Two weeks ago, the company’s British chief executive, Robert Hogg, and his deputy resigned after China refused to allow any Cathay staff members associated with the demonstrations to fly over their airspace. At the same time, the government ordered the airline to submit information on all crew members flying into or over China. The airline’s shares plummeted, leading to Hogg’s resignation, although the fact that the news of his departure was first reported by Chinese state media has led some to speculate he was pushed.

“We fully support the upholding of the Basic Law and all the rights and freedoms afforded by it,” said James Tong, Cathay’s director for corporate affairs. The Basic Law is the constitution enshrining the “one country, two systems” principle that ensures Hong Kong’s degree of autonomy from the mainland.

“At the same time, we are also required to adhere to all of our regulatory duties, including those prescribed by the authorities in mainland China. The airline must do this; there is no ground for compromise,” said Tong.

As the turmoil threatens to overshadow the 70th anniversary of the establishment of the People’s Republic of China on October, “the Communist party is losing patience with the protest movement and companies that do not take a clear-cut stand against it”, says the newspaper.

Jeremy Tam, a member of Hong Kong’s Legislative Council and former Cathay pilot who quit the airline last week, told the BBC there was now a “climate of fear” across the airline.

“There is a lot of fear, they worry about their Facebook accounts, they worry about anyone capturing their messages, people who could spy on them and give their name to management. That kind of fear is still happening and spreading rapidly,” he said.

“How can you control people who are doing this in their own time? This is not Hong Kong at all. We have freedom of speech here. We have our own jurisdictions and our own common law.”

Last week, Rebecca Sy, the head of Cathay Dragon’s Flight Attendants Association who had been with the company for 17-years, claimed she was fired after being called into a meeting and showed print-outs of her Facebook posts in support of the protests.

“All the employees are being frightened, not just cabin crews, but even the management,” she said in a press conference. “My colleagues are all terrified because of its white terror.”

It was after Sy’s firing that yesterday’s demonstrations were called.

The Economist speculates that this political coercion of business will be limited: “Some business types believe things may go back to normal… Cathay was, in the words of one senior Western banker, ‘the pound of flesh that was necessary, but it was a clean cut’.”

Writing in The Atlantic, however, Michael Schuman is concerned about a pattern of behaviour in which Chinese authorities use their economic leverage to curb dissent internationally.

“For now, the pressure on these companies to act against democracy advocates has been limited to Hong Kong,” Schuman writes. “Yet the businesses in Beijing’s crosshairs are also global, with employees and operations around the world. It is not such a big leap to fear staff working for these firms outside of Hong Kong could also be vulnerable if they express favor toward the protest movement.”

Bloomberg quotes Carol Ng, chairwoman of the Hong Kong Confederation of Trade Unions, who said at the protest that Beijing was “suppressing people’s freedom of speech through their employment”, adding: “That is unacceptable. The airlines have kowtowed and bowed down completely.”