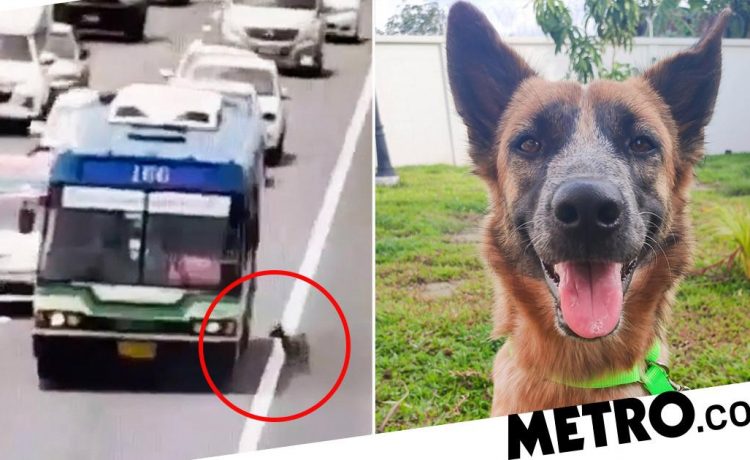 A hungry and lost dog left stranded on a busy highway was rescued by a kind bus driver.

Poor Cookie had been missing for three days before emerging on the expressway in Bangkok, Thailand, yesterday lunchtime.

Bus driver Tuen Prathumthong was told over radio to slow down, as the dog was posing a danger to passing vehicles.

But he felt as if he couldn’t just ignore two-year-old Cookie – who was dodging moving vehicles in temperatures soaring up to 37 degrees Celsius.

Bus conductor Noknoi said: ‘We received an alert about the dog in the road so I knew there was a hazard.

‘When we arrived at that position there were cars slowing down, so I realised it was for the dog.

‘I checked with the passengers if they would mind if we stopped to collect the dog, as it was in danger.

‘The driver stopped the bus and I called out to the dog to come onboard.

Touching CCTV footage showed the relieved dog bounding onto the bus when the doors were opened for him.

Cookie was taken back to Muang Thong Thani depot for fresh water, food and a nap before his owner came forward to collect him.

Pachara Yoosawat said her dog had disappeared from a construction site two days before and she had been looking for him ever since.

‘Cookie has lost about half a kilo in weight and he has some injuries on his feet,’ she said.

‘He was very tired and has been sleeping a lot but he’s starting to feel better. He’s still a little bit scared of people. He was very pleased to see us.’

Pachara offered a reward of 5,000 Baht (£116) to the bus service, but they declined and suggested it was given to animal rescue groups instead.

READ  Country diary: a quiet morning gives way to noise and commotion
Share on FacebookShare on TwitterShare on PinterestShare on Reddit
newsgrooveMarch 31, 2021