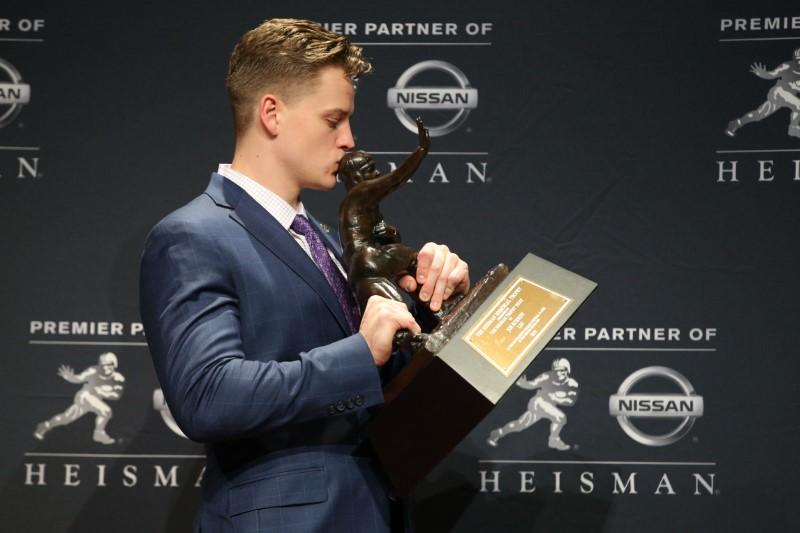 The redshirt senior, who transferred from Ohio State following spring practice in 2018 after failing to win the starting job, has led the Tigers to a 13-0 record and the No. 1 seed in the College Football Playoff. He set a record for highest percentage of points in the balloting — 93.8, breaking the record set by Ohio State quarterback Troy Smith, who earned 91.63 percent of the point total in 2006.

“The first thing I want to say is,” Burrow said, pausing to wipe away tears, “to thank my offensive line first.”

Burrow is the second player from LSU to win the Heisman, joining running back Billy Cannon, who took home the stiff-armed trophy in 1959.

Burrow also set Heisman records by earning 90.7 percent of the first-place votes and by being named on 95.5 percent of the ballots. Three points are awarded for first place, with two for second and one for third.

“All my teammates have supported me, welcomed me with open arms, a kid from Ohio coming down to the Bayou,” Burrow said. “It’s been so awesome.”

Burrow had been the runway leader since he completed 31 of 39 passes for 393 yards and three touchdowns in a 46-41 win at Alabama on Nov. 9.

Burrow leads the nation in touchdown passes (an SEC-record 48) and is on pace to set a NCAA record for completion percentage (77.9, 342 of 439). He is second nationally with 4,715 passing yards and in passing efficiency rating (201.5) while directing the nation’s most-productive offense (554.4 yards per game).

He was LSU’s starting quarterback last season but was considered a long-shot to win the Heisman before the season — until everyone saw a new-look Tigers’ spread offense that put up 45 points in a Week 2 win at Texas when Burrow passed for 471 yards.

“When he made that play against Texas, I thought we’d go undefeated and that we had the best player in the country,” LSU coach Ed Orgeron said on ESPN on Saturday night.

Quarterbacks have won the Heisman every year since 2000, with three exceptions for running backs — USC’s Reggie Bush in 2005 (since vacated), and Alabama’s Mark Ingram (2009) and Derrick Henry (2015).

Young is the first defensive player to finish in the top four since 2012, when Notre Dame linebacker Manti Te’o was second behind Texas A&M quarterback Johnny Manziel.

READ  Svitolina and Bouzkova to clash in Monterrey final