Burnley 0-2 Manchester United: Red Devils up to fifth with victory 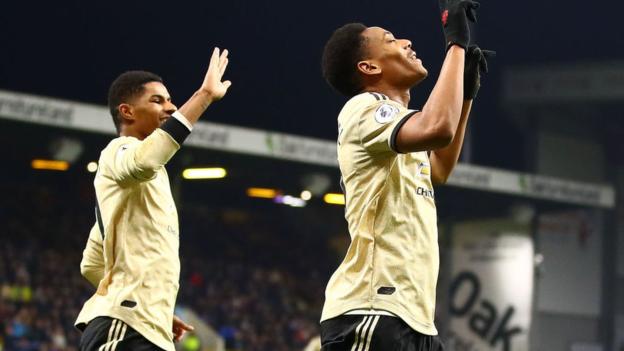 Anthony Martial and Marcus Rashford were on target as Manchester United defeated Burnley at Turf Moor to move within a point of the Premier League’s top four.

After his brace against Newcastle on Boxing Day, Martial tapped home his 10th of the season from close range a minute before the break after Andreas Pereira had robbed Charlie Taylor and crossed superbly from the right. Rashford then raced clear in stoppage time to seal a deserved win.

Rashford had earlier hit the post and Martial had a second-half effort ruled out.

Although Burnley sparked briefly after the interval and David de Gea needed to make a good save to deny Phil Bardsley, Burnley never threatened to prevent United ending their 14-game run in the league without keeping a clean sheet.

United have now taken 13 points from their last six games and are up to fifth in the table, although that could change on Sunday when Wolves play Sheffield United.

Ole Gunnar Solskjaer remains confident United can finish in the top four despite their dismal form away from Old Trafford that brought them to Turf Moor with nine points from nine games on their travels.

Apart from August, they have suffered one defeat a month, at West Ham, Newcastle, Bournemouth and most recently Watford, who at that point were bottom of the table.

Their problem is clear. United had gone 14 Premier League games without keeping a clean sheet, having kept just two all season, and played 14 away games across two seasons without keeping the opposition out.

Yet Burnley had a monkey of their own to get off their back.

Apart from Robbie Blake’s match-winner in 2009, they had not scored a goal against United at Turf Moor since 1969.

It meant something had to give in a second half which was, thankfully, far more entertaining than the first.

Martial had a goal disallowed by referee Mike Dean rather than VAR after shoving James Tarkowski in the back. At the other end, Jeff Hendrick screwed a good shooting chance way wide to hoots of derision from the home support.

De Gea saved low to his right to deny Bardsley a goal against his former club but though they pressed, Burnley never truly looked like equalising and Rashford wrapped up the win with his 17th goal of the season and ninth in 11 games.

It is maybe no surprise a Martial goal usually means a Manchester United win.

He has now scored in nine games across all competitions, and his side have been victorious on eight occasions, the odd one out a 1-1 draw at Wolves in August.

Solskjaer has been working on Martial’s anticipation, believing it will net him an extra half a dozen ‘simple’ goals a season.

The United boss will have been delighted with this latest effort therefore, almost as much as he would with Pereira, who showed admirable awareness to produce a quick cross for his team-mate and resist the obvious temptation to run into the space he created by robbing Taylor.

Yet Martial remains an enigma. With victory still in the balance, he found himself running one-on-one with Burnley keeper Nick Pope. Jesse Lingard was lambasted against Everton this month when, in a very similar position, he chipped the opportunity way over the bar.

Martial did not even manage that. Instead he ran wide, stopped, then turned away from goal to try and set up a team-mate, which met with total failure.

Had Burnley found an equaliser in the final minutes, Martial’s error would have been costly. As it was, United held on.

So near, yet so far for Hart

Until Martial’s goal, the first half was not the greatest Premier League advert.

Former United defender Bardsley cleared a close range shot by Martial off the line after the Frenchman had reacted to a blocked Daniel James effort but there was almost as much interest in the Burnley bench as their performance.

When goalkeeper Nick Pope turned his ankle six minutes before the break, the crowd were treated to the sight of Joe Hart warming up in anticipation of his first Premier League appearance since Boxing Day last year, a 5-1 home hammering by Everton.

It hardly seems believable Hart is only 32 and won the last of his 75 England caps in November 2017.

Hart returned to the bench alongside another forgotten man, Danny Drinkwater, but no sooner had the teams entered the tunnel than Hart reappeared for a warm-up.

It seemed his long wait for a top-flight return was at an end. But after a thorough 15-minute workout, Hart went back to the dugout as Pope unexpectedly returned.

Man of the match – Andreas Pereira

Burnley host relegation strugglers Aston Villa at Turf Moor on Wednesday, 1 January (12:30 GMT) in their next Premier League match, before welcoming Peterborough United in the third round of the FA Cup on Saturday, 4 January (12:31).

Manchester United travel to Emirates Stadium to face old rivals Arsenal in the league on Wednesday (20:00) before a trip to Wolves in the FA Cup, also on Saturday (17:31).