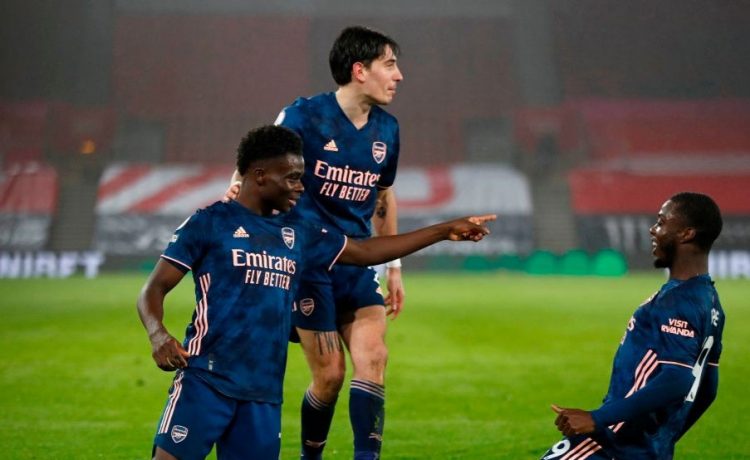 Three days after being dumped out of the FA Cup by the Saints – which was their first defeat in seven matches and saw them concede a goal for the first time in over eight hours – Mikel Arteta’s men rediscovered their winning habit in assured style.

Emile Smith Rowe was also particularly brilliant and there will be crossed fingers at Arsenal that the injury that forced him off in the second half is merely a niggle rather than anything major.

Meanwhile, Southampton’s dip in the division was extended to just one victory in their last seven fixtures. Both teams had some shuffling from the weekend.

Arsenal had five changes with David Luiz, Thomas Partey, Emile Smith-Rowe, Bukayo Saka and Alexandre Lacazette in while Pierre-Emerick Aubameyang was missing due to a family problem.

Facing the same opponents so soon can often lead to a laboured, lousy encounter but this was in contrast.

Inside 10 minutes, there was already an intelligently worked goal apiece during a ridiculously intense stanza that should have had Arsenal leading within 50 seconds only to find themselves rapidly punished at the other end.

As the rain lashed down at St Mary’s, Lacazette was played through by Granit Xhaka after Jan Bednarek gifted the visitors possession.

Left one on one with Alex McCarthy, the forward targeted the bottom right but was thwarted by the goalkeeper’s knee.

Arsenal barely believed their fortune in being helped to such a positive start, but a few blinks later and a James Ward-Prowse corner from the right was sent to the edge of the box.

Stuart Armstrong met the delivery on the half-volley, rocketing it past Bernd Leno and into the top corner.

A breathless opening only ratcheted up. Nicolas Pepe, making his first league start for Arsenal since December 19, had switched off for Southampton’s opener and then wasted a cross when afforded time and space.

He redeemed himself immediately though, assisted by another fine Xhaka throughball.

Pepe showed strength and determination to carry the ball into the box and slot past McCarthy to level matters.

The game pinged from box to box, both teams being aggressive in and out of possession with Mikel Arteta’s side doing well to better the hosts at their rabid pressing game.

Saints had more of the shots in the first 45, but Arsenal displayed more efficiency in their placement.

Ralph Hasenhuttl’s charges had an opportunity to swing the match in their favour when David Luiz clumsily cleared straight to Theo Walcott. He had Danny Ings and Che Adams desperate to be unleashed with a good ball, but sent a shocking pass out for a goal kick.

It was made to look even worse as Leno’s take was headed down to Xhaka, who supplied Lacazette.

The attacker released Saka and McCarthy bulleted out of his box, but wasn’t quick enough.

Saka superbly rounded the keeper and made it advantage Arsenal.

In the second half, the teenager was decisive again. Southampton switched off from a restart on 72 minutes and a glorious Cedric Soares diagonal found Saka on the right. He rolled a pass across goal for Lacazette to coolly bury in the bottom left.

Saka’s ability to play beyond his years and stand out has not been a surprise for a while. Arsenal, with three away league victories on the spin for the first time since October 2018, will hope that long continues.