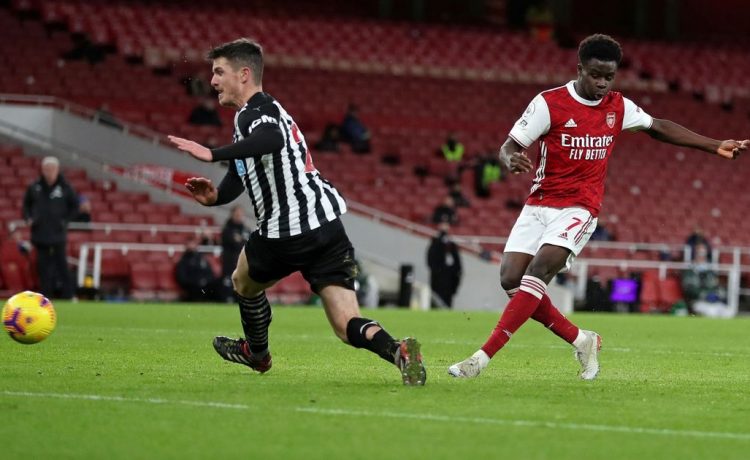 Bukayo Saka continued his fine form as he scored against Newcastle – and he can now count himself among esteemed Arsenal company.

Saka scored the second goal as Mikel Arteta’s side beat the Magpies 3-0 to climb into the top half of the Premier League on Monday night.

Pierre-Emerick Aubameyang had opened the scoring five minutes after the restart, and Saka’s goal made the points safe in the hour mark before his team-mate’s second added gloss to the scoreline late on.

Saka’s strike was his third goal in five top-flight games – four of which the Gunners have won – with the 19-year-old’s form having been key to his side’s mini-revival.

He has now scored five goals and posted six assists since bursting into Arsenal’s first team.

And only three players have been directly involved in more goals for the club during their teenage years.

Saka’s tally of 11 goal involvements as a teenager is bettered only by Nicolas Anelka (30), Cesc Fabregas (28) and Theo Walcott (12), according to OptaJoe.

With the Gunners winger not due to turn 20 until September, he will surely pass Walcott’s tally and could well hunt down the stats posted by Anelka and Fabregas -hinting at a big future for the England international.

Another young star who has been central to Arsenal’s improvement in recent weeks is Emile Smith Rowe, and he was on form again as he set up Saka’s goal.

And the combination between the two made Premier League history.

Smith Rowe’s cross for Saka after a jinking run past Newcastle defender Jamaal Lascelles was the third time the 20-year-old had teed up his team-mate this season.

And that represented the first time two English players have combined for as many goals before either player has turned 21.

In Smith Rowe’s five starts for Arsenal he has created 10 chances – a tally only bettered during the same timeframe by Bruno Fernandes of Manchester United.

When made aware of this fact, Smith Rowe told Sky Sports : “I look up to him as a player. He is a great player and his stats are crazy so that is a good achievement.”