They rung in the New Year together in Hawaii.

But their time in the sun came to an end on Saturday when Bruce Willis and his family were spotted leaving Hawaii.

The 64-year-old actor rocked a double denim combo for the outing when seen at the airport with wife Emma, 41, and daughters, Rumer, 31, Mabel, seven, and Evelyn, five. 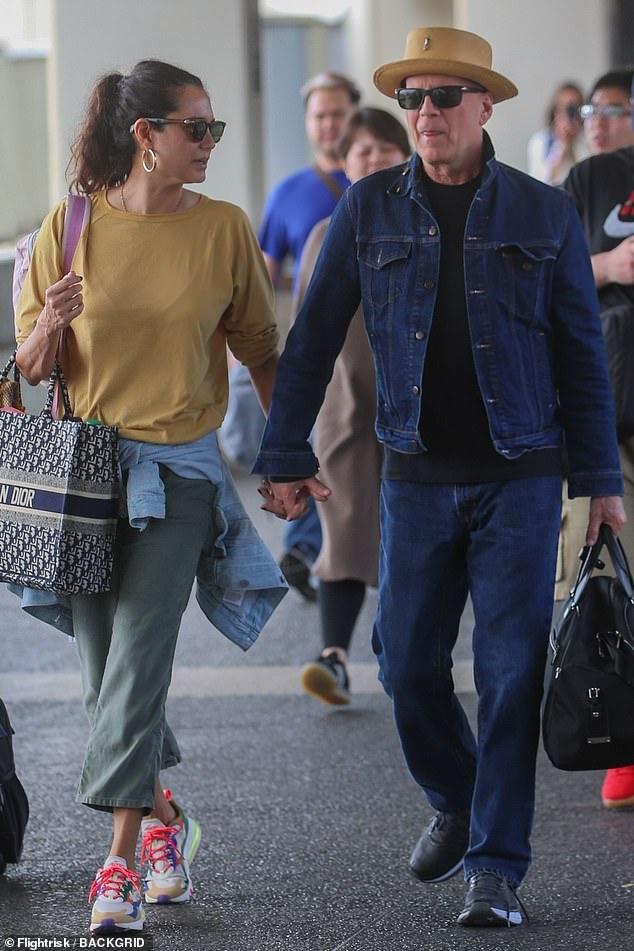 He’s a cool dad! Bruce Willis was spotted rocking denim on denim on Saturday when he left Hawaii with his wife and kids

Bruce sported a black T-shirt underneath his dark wash jacket and accompanying jeans.

He accessorised the look with a camel colored wide brimmed hat at wore a pair of rectangular shades.

The Die Hard actor carried a small carry-on bag in on hand while holding the hand of his wife in the other. 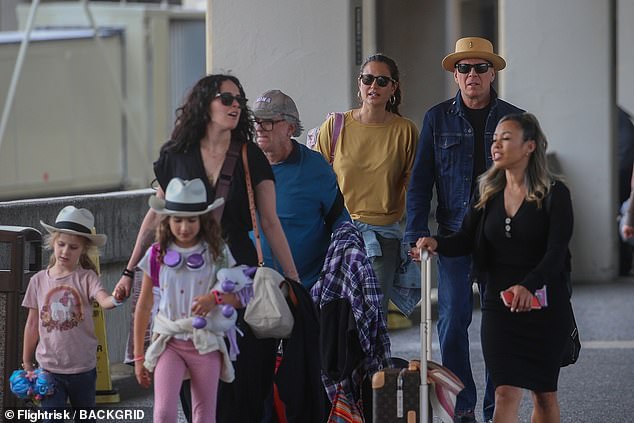 Family affair! Bruce was seen with his wife Emma, 41, and his kids, Rumer, 31, Mabel, seven, and Evelyn, five, at the airport 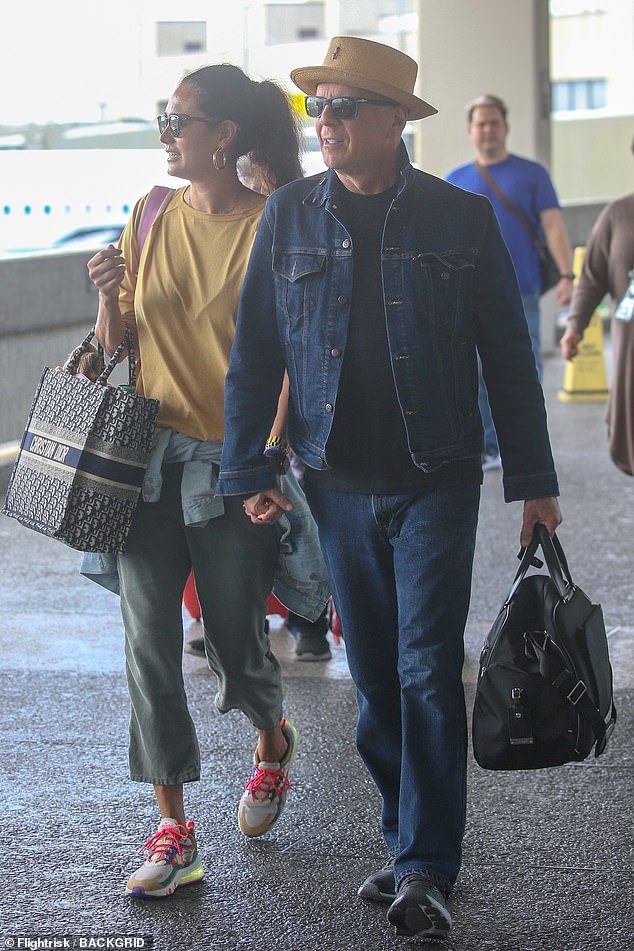 Gorgeous: The English-American model accessorised her look with a $2750 Christian Dior tote bag while also carrying her youngest daughter’s princess backpack over her shoulder

Emma matched her man with a denim jacket wrapped around her waist ahead of the flight.

She teamed the look with a yellow sweatshirt, teal colored capri trousers and a pair of sneakers.

The English-American model accessorised her look with a $2750 Christian Dior tote bag while also carrying her youngest daughter’s princess backpack over her shoulder.

The fellow actress stunned in a black v-neck ensemble  and styled her hair out in its natural curls. 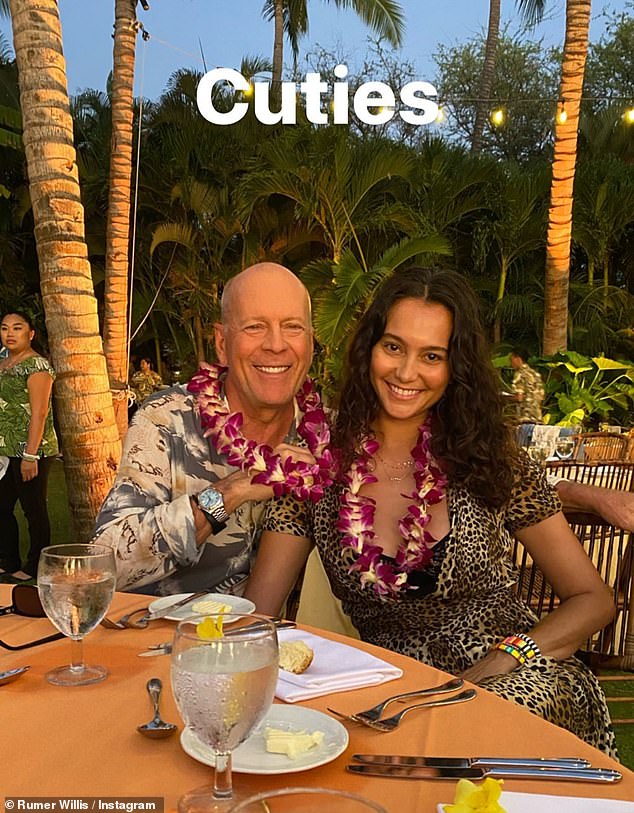 Here’s to 2020! The family’s outing comes after they rung in the New Year in Hawaii together 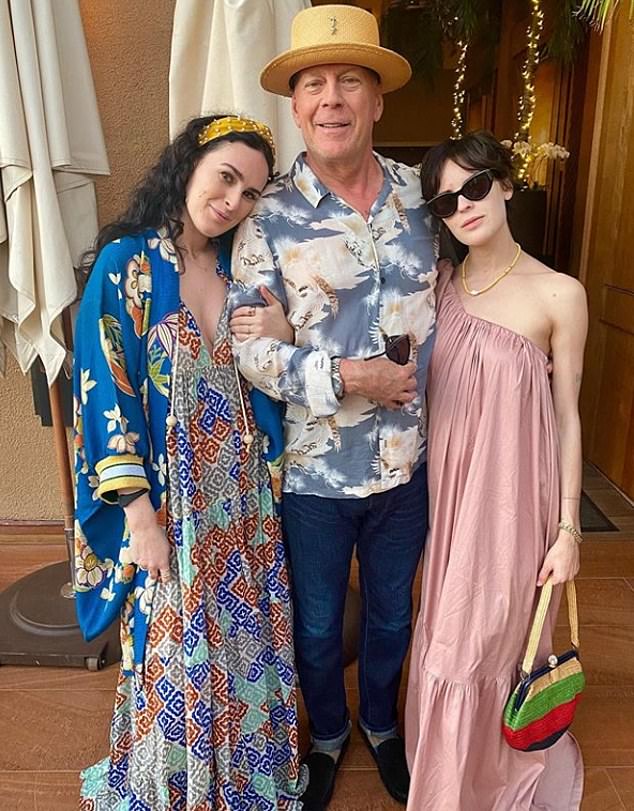 Time with dad: Rumer was joined by her sister Tallulah, 25, for the adventure. Not seen was their other sister, Scout, 28

She too walked along with shades over her eyes while indoors and was seen holding her youngest sister’s hand.

The family’s outing comes after they rung in the New Year in Hawaii together.

Although not seen at the airport, joining them on their travels was Bruce’s daughter, Tallulah, 25.

Scout, 28, who is the middle daughter from Bruce’s marriage to Demi Moore, was not seen on the family trip away. 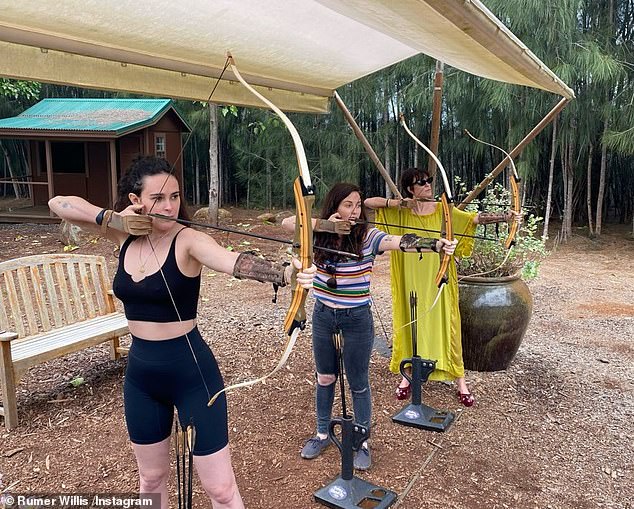 New skills: Friday saw the sister’s try their hand at a round of archery 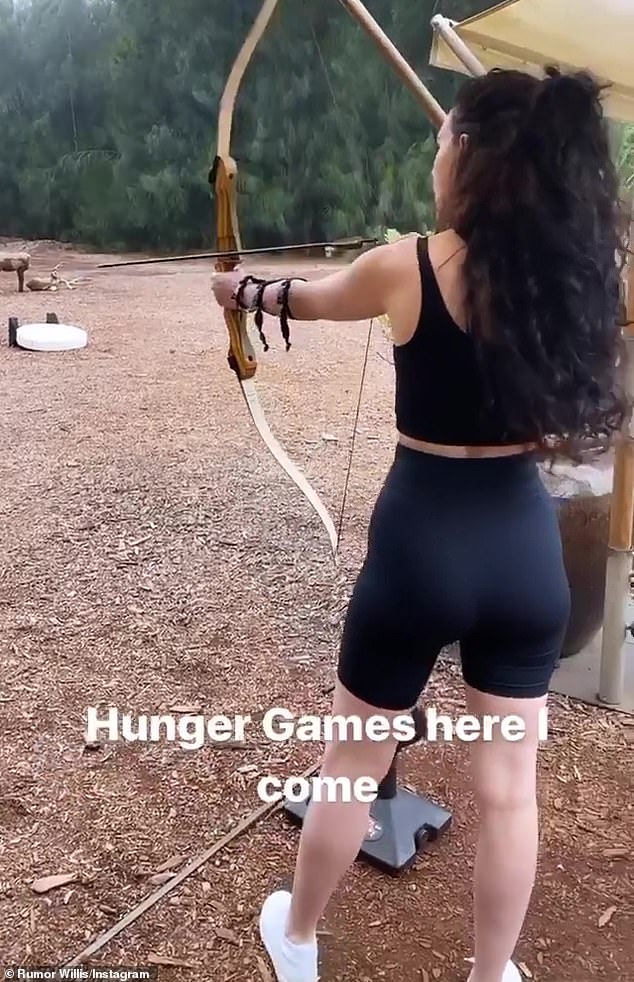 And while much of the trip was full of family time, Rumer enjoyed a solo hike on Thursday morning.

Rumer kept her hair out natural and appeared to be wearing very little to no makeup.

Friday saw the sister’s try their hand at a round of archery.

During the trip, the actress also took to social media to reveal she had hit three years of sobriety. 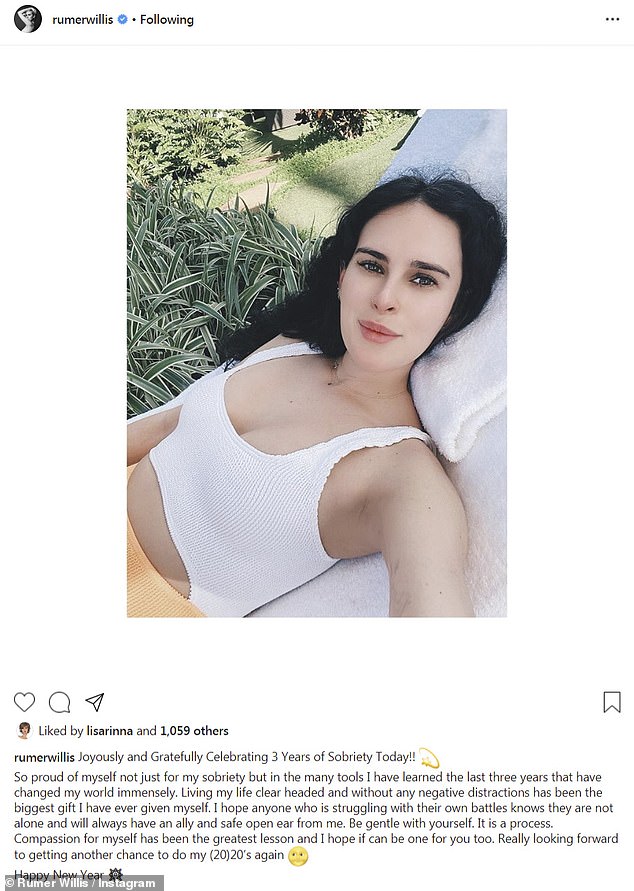 Three years strong: During the trip, the actress also took to social media to reveal she had hit three years of sobriety 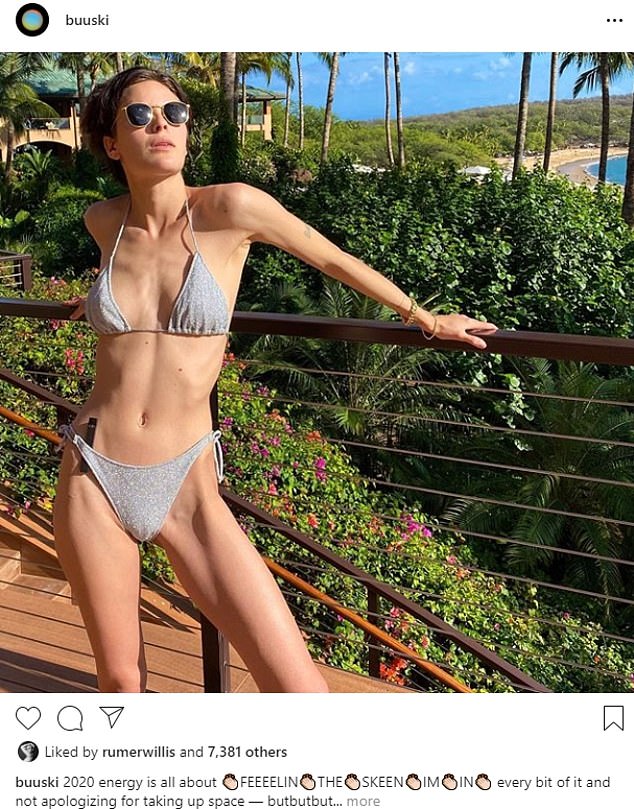 Better than ever: And while Rumer opened up about her sobriety, Tallulah spoke about her former eating disorder

‘Joyously and Gratefully Celebrating 3 Years of Sobriety Today!!’ she captioned to start the new year.

‘So proud of myself not just for my sobriety but in the many tools I have learned the last three years that have changed my world immensely. Living my life clear headed and without any negative distractions has been the biggest gift I have ever given myself.’

She continued: ‘I hope anyone who is struggling with their own battles knows they are not alone and will always have an ally and safe open ear from me. Be gentle with yourself. It is a process. Compassion for myself has been the greatest lesson and I hope if can be one for you too. Really looking forward to getting another chance to do my (20)20’s again. Happy New Year.’ 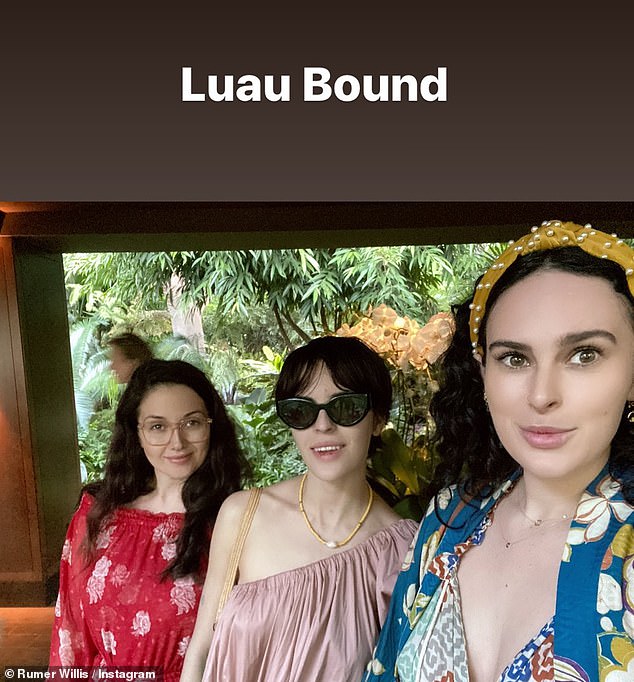 Fun time together! The lady’s enjoyed a luau while away in Hawaii

And while Rumer opened up about her sobriety, Tallulah spoke about her former eating disorder.

2020 energy is all about FEELIN THE SKEEN IM IN. every little bit of it and not apologizing for taking up space — butbutbut it also means gaining a liddddo bit more padding on this flesh suit, peering deeper into my more icky demons and being responsible for what I put out into the ether,’ she began.

‘My confidence (which was patched together through long years of grasping for self acceptance) blooms from what I’m most proud of, my heart and my spirit. However in an effort to claim possession over all parts of myself, I believe I unconsciously misstep by showing images of a bod I am aware that can be considered underweight.’

She continued: ‘It’s where I’m at and I don’t want to hide myself in shame, but I also know that in my journey of healing I want to practice deeper awareness. I am just a gentle human doing my truest best and I only desire to walk into this sexy ass decade with compassion and transparency. if you struggle with any element of the viciousness of this stuff, please know you are not alone. The National Eating Disorder Hotline – 1-800-931-2237.’

The Willis daughters have continued to be open and honest about their personal struggles after growing up in the spotlight as the children of famed stars, Demi Moore and Bruce Willis. 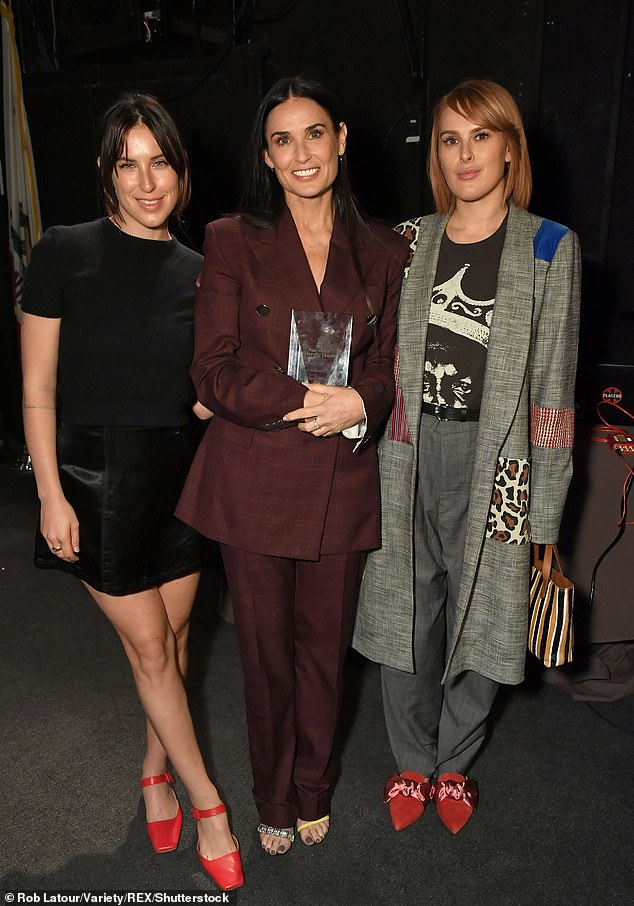 In the spotlight: The Willis daughters have continued to be open and honest about their personal struggles after growing up in the spotlight as the children of famed stars, Demi Moore and Bruce Willis (Scout and Rumer pictured with Demi in 2018)

Star Trek: Strange New Worlds is the Kind of Science Fiction We Need