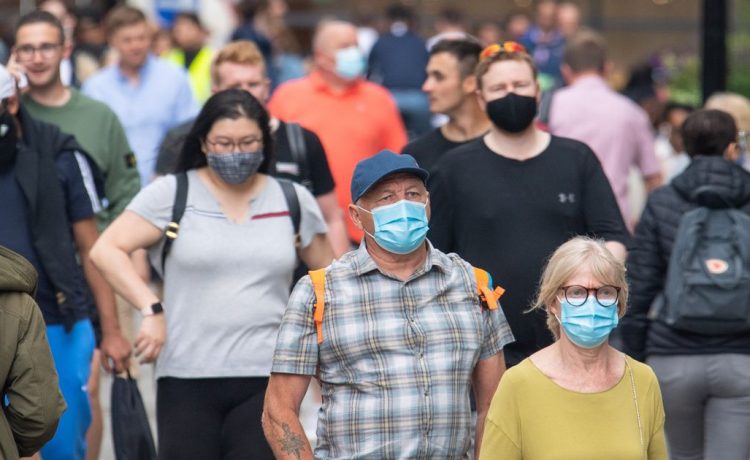 Face masks should be worn in “indoor enclosed spaces”, new government guidance on Covid curbs will say as ministers U-turn on ditching restrictions.

Last week, Boris Johnson and new Health Secretary Sajid Javid had insisted face coverings would be a “personal choice” after the so-called “freedom day” on July 19.

But speaking to Sky News on Sunday, Vaccines Minister Nadhim Zahawi said that the link between infections and hospitalisations had been “severely weakened”, as he added: “It’s important that we remain cautious and careful and the guidelines that we will set out tomorrow will demonstrate that, including guidelines that people are expected to wear masks in indoor enclosed spaces and of course to remain vigilant with hands and face.”

It comes after the Prime Minister was pictured sitting in his car without wearing a face mask.

Mr Zahawi also said these were “the hard yards”, when asked if vaccination rates were slowing down.

He told Trevor Phillips On Sunday on Sky News: “What we need to make sure is as the virus gets desperate and attempts to infect people, to mutate and be able to survive, we should continue to fortify the nation with a vaccination programme because that is the way we transition it from pandemic to endemic status.”

Mr Johnson ditched his face mask on the chauffeur-driven ride home from England’s Euro 2020 victory, the Mirror reported on Friday.

He was snapped leaving Wembley Stadium without a covering in the back of his ministerial Range Rover despite his driver, security detail and even wife Carrie masking up.

Labour criticised the Prime Minister, claiming it showed “he has never taken this pandemic seriously” and has “no common sense”.

Until July 19, face masks are required by law in taxis and private hire cars in England – with £200 fines for failing to wear one without an exemption.

Meanwhile, Mr Zahawi dismissed a story in The Sunday Times which suggested the gap between receiving the two doses of the Covid jab could be cut to four weeks.

“The real-world data, the clinical data suggests that actually the eight-week interval offers that additional fortification in terms of protection with the two doses, at much better than having the interval shortened any further.”

He said those most severely affected by coronavirus now were those who had not had the vaccination.

The Government was looking at ways to tweak the NHS app, Mr Zahawi said.

He said: “The team are looking at how we use that app in terms of alerting people to those around them who test positive.”

And he added: “It’s important to look at that in a new context of this massive vaccination programme and make sure that it is fit for purpose for this new world including, for example, being able to take maybe five days, as we have piloted, of lateral flow tests and upload them to the system rather than having to self-isolate.”