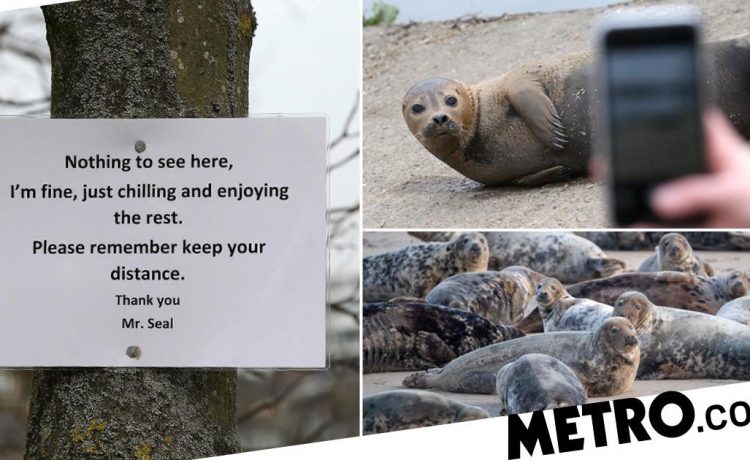 People have been warned to give seals space after Freddie the seal died following a brutal dog attack.

The Government has partnered with Seal Alliance to urge Brits to enjoy the mammals from a distance after the tragic incident near Hammersmith Bridge.

People are being advised to watch seals with binoculars from afar, make sure they never feed them and keep their dogs on leads when in the same areas as wild animals. Those who use drones should also use masking lights.

More seals have ventured onto land as people stay indoors amid the national Covid lockdown – but the new guidance comes after restrictions were eased slightly on March 29.

The Seal Research Trust’s Sue Sayer said: ‘Marine issues are massive and usually global, but this is the one marine issue that we can do something about on our own patches in the UK.

‘It’s really simple – if we all give seals space and keep away, that’s part of the problem solved.’

‘We need to be aware of the harm we can cause by getting too close to our seals and the often tragic consequences when we do.’

Freddie suffered a broken bone, a dislocation and a bite to his right flipper after being attacked.

Vets at South Essex Wildlife Hospital decided it was best to euthanise the ‘national treasure’ as he was in too much pain and could not be saved.

In a statement, the hospital said: ‘Please folks, do not go near seals and always, always, keep dogs on leads and under control.’

Dog owner Rebecca Sabben-Clare QC, has apologised ‘unreservedly’, saying she wishes she put her pet on a lead.

Freddie’s death has sparked debate over whether there are enough laws in place to protect wild animals from dogs.

The Dangerous Dogs Act bans some breeds and protects livestock but it does not cover wildlife.

On March 1, the Conservation of Seals Act 1970 and the Wildlife (Northern Ireland) Order 1985 was updated to ‘prohibit the killing, injuring or taking of seals, as well as limiting the circumstances in which those activities can be permitted’.

This is a change from previous laws which only ruled out killing, injuring or taking seals with weapons or poisonous substances.

Environment Secretary George Eustice said: ‘Seals are one of our most iconic marine mammals.

‘They can be found along our coastline around the UK, and we must do all that we can to protect them.

‘Disturbance by members of the public can be detrimental to seals, but this is entirely preventable. I would urge everyone to follow the guidance, give seals the space that they need and respect this vulnerable marine species.’