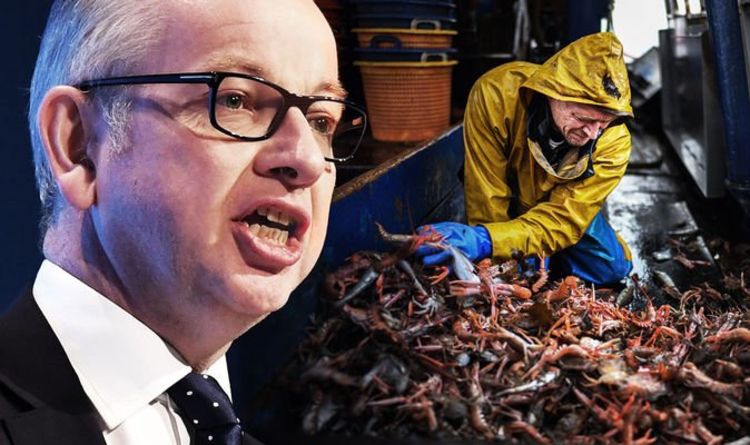 If the Tories are able to achieve that in the December 12 poll, Boris Johnson will immediately look to finally push his Brexit deal through the UK Parliament. Britain is set to leave the European Union on January 31, but British fishermen are currently bound by the CFP. Last week, British fishermen erupted in fury at Brussels, accusing the EU of being “determined” to continue to “pillage” Britain’s fisheries, even after the UK has fully cut ties with the bloc.

The EU was planning on requesting access to British waters as part of any future trade deal with the UK.

But Fishing For Leave reacted furiously, claiming the European Union is “determined” on forcing Britain to “surrender fishing” even once the country has fully cut ties with the Brussels bloc.

Prime Minister Mr Johnson has repeatedly said the UK will take back control of its fisheries after Brexit and become an “independent coastal state”.

Now former Environment Secretary Michael Gove has insisted when the UK leaves the EU, “we will be an independent coastal state, in full control of our water”.

Brexit news: Michael Gove has promised Britain will be outside the Common Fisheries Policy (Image: GETTY)

Speaking in a video on the Scottish Conservatives Twitter account following a meeting with the Scottish White Fish Producers Association, he said: “What can we look forward to, not just the sea of opportunity that we hear about, but in terms of what a Conservative majority government can provide for the fishing industry

“If we have a Conservative majority Government, we will be outside of the Common Fisheries Policy and outside of the CFP there is a huge opportunity for Scotland’s coastal communities, especially here in the North East

“One of the things we are absolutely clear about is that when we leave the European union, we will be an independent coastal state, in full control of our waters.”

Mr Gove also insisted negotiations with the EU over access to their markets to trade and access to British waters will be separate, and will take place on an annual basis.

He warned EU boats can enter British waters, “but only on our terms”, and insisted the UK will have “first call on waters” as our processing capacity and fleet grows.

Mr Gove said: “We will negotiate with the EU for access to their markets for trade, but we will have completely separate negotiations about access to our territorial waters.

“There will be annual negotiations – we’ll be like countries such as Iceland and Norway, with full control over their waters

“Other boats can come here but only on our terms, and every year we will re-negotiate access and that means as our processing capacity grows, as our fleet grows, we will have first call on additional water.

Brexit news: Boris Johnson has repeatedly said the UK will take back control of its fisheries (Image: GETTY)

Brexit news: The Government agreed a financial package to help the industry in the event of a no deal Brexit (Image: GETTY)

Mr Gove also attempted to ease fears over a mix-up between access to our waters and access to the EU’s markets.

He concluded: “I know there are some people who are worried that somehow access to our waters, and access to the EU’s markets will be mixed up. Absolutely not.

“They are two separate negotiations and we know we can ensure that our fishing industry and our coastal communities thrive as a result of using these annual negotiations to build up our capacity.

“As the SNP have admitted under Scottish Conservative policies, there will be more jobs and more investment in Peterhead, in Fraserburgh, in Banff and Buchan and of course, in the wider North East.”

The latest assurances come after British fisherman last week received a huge boost when the Government agreed a financial package to help the industry in the event of a no deal Brexit.

The Department for Environment, Food and Rural Affairs (DEFRA) agreed a compensation scheme to help cover any loses in the event of a no deal Brexit.

According to Politico, the department has struck a deal with British outsourcing firm Enquinty to “disburse hardship funding”, and have developed a £49,000 “seafood crisis intervention scheme”.

The deal will help to offset any financial burdens on the industry, amid fears fish could be left to rot if the industry encounters customs or border issues following a no deal exit.