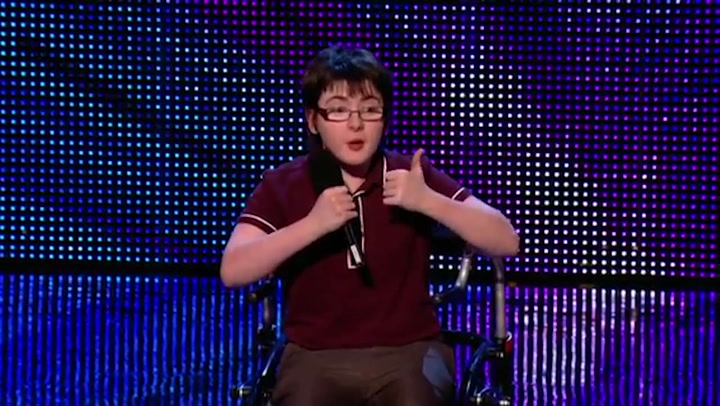 Jack Carroll auditions for Britain’s Got Talent in 2013

Britain’s Got Talent Jack Carroll won the nation’s hearts when he appeared on the talent show with a stellar stand-up routine in 2013.

At that point, Jack was only 14 years old and, in the years that followed, he has been adding impressive roles to his acting resume.

Before he even appeared on BGT, comedian Jason Manford saw a video of him performing at his parent’s wedding anniversary and invited the teen to give a short performance at one of his live shows.

During his time on the talent show, judges voted him through and he even made it to the semi-finals.

Jack – whose cerebral palsy is often a topic of his routines – eventually finished second in the final.

As one of the show’s favourites, Jack even returned to the competition series in 2019 in BGT: The Champions.

In the same year he appeared in Big School, he portrayed a character named Harry in the Sky One show Trollied.

He even performed an act for Jason Manford
(

Harry was a checkout operator who even has nine A*s in his GCSEs and Jack portrayed him for four years.

Jack took a chance at soap dramas and even appeared in an episode of Doctors in 2015 and 2021.

Despite his growing roles, the comic was still giving performances for Sunday Night at the Palladium and Live At The Apollo!

He’s tried his hand in dramas and comedies
(

In 2019, Jack starred alongside Asim Chaudhry (People Just Do Nothing) and Johnny Vegas in the comedy film Eaten by Lions.

And now, proving that he is all about career diversity, he is set to make his debut in Cured – a play about a religious pilgrimage.

He plays a teenage Scouse atheist with a disability, who feigns Catholicism and joins a Church trip to France to try and get closer with a girl he likes.

The show will be opening in Liverpool next year.

His other roles include 4 O’Clock Club and CBBC appearances on The Dog Ate My Homework and Sam & Mark’s Big Friday Wind-up.