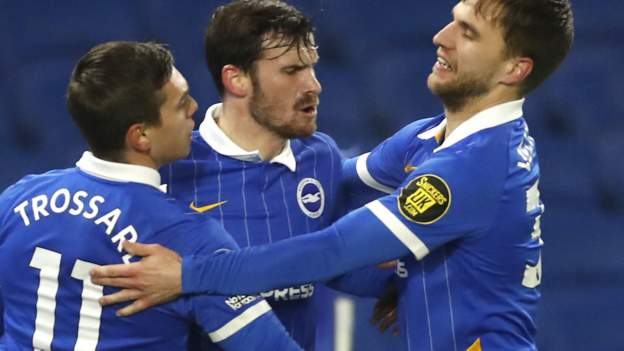 And the hosts comfortably held on at the Amex Stadium to earn their first home league win since June.

“From start to finish we did what we needed to do, created some chances, scored a really good goal [and had a] good attitude around the pitch against a top opponent.”

Spurs boss Jose Mourinho, whose side stay six points off the top four in sixth, admitted his players were “too unhappy” on the pitch.

“When you are too sad, you have no energy, enthusiasm or confidence, and that was what the team showed in the first half,” said Mourinho.

“[My squad] they feel too much the absence of a player like Harry [Kane].”

Coming into this fixture, Potter’s team were the only side left in England’s top four divisions without a win at home this season.

“I’m delighted for the players and our supporters because it’s important we improve our home form,” the ex-Swansea manager added.

“It’s the best [performance] in terms of the opponent.”

The Seagulls were the better side throughout, with Gross striking the woodwork in the third minute.

Trossard’s second goal of the season deservedly put them ahead, before Gareth Bale headed a Lewis Dunk effort off the line on the stroke of half-time.

Albion’s Ben White saw his shot well-saved by Hugo Lloris after it deflected off Alderweirweld in the 55th minute.

And the Spurs defender was also on hand to clear an Aaron Connolly’s effort off the line in stoppage time when the Republic of Ireland international looked destined to score.

“I’m delighted with everything about the game tonight to be honest,” said Potter.

“There’s a lot of football to play – whatever points we have now is not enough. We have to keep fighting for everything until the last kick.”

A winless December may have had Brighton boss Potter looking over his shoulder.

But three wins in their past four games in all competitions – including three clean sheets – suggests the Seagulls are starting to find the form they need to pull away from the bottom three.

Sorry Spurs out of ideas

After losing to Liverpool on Thursday night, Spurs needed a response – the omens were not great, given when they lost to the champions in December they followed it up with a 2-0 defeat to Leicester.

A win would have put the visitors fifth in the table. Instead, they suffered back-to-back defeats for a second time this season.

“I can imagine that the team when it loses is a sad team,” Mourinho told BBC Radio 5 Live.

“The reaction after that defeat was not phenomenal, the fact that you lose, I don’t like to speak on behalf of the players, but they feel too much the absence of a player like Harry [Kane].”

With Kane sidelined with injuries to both ankles, Real Madrid loanee Bale started just his second league game of the season.

But, like the rest of Spurs’ forward line, the four-time Champions League winner looked uninspired in the opening 45 minutes. The Welshman was subbed shortly after the hour mark.

“It’s not about the players. I told them there is no replacement for Harry Kane,” added the Spurs boss.

“In the first half we tried to give the dynamic that [gave] us the success with a number of goals, which is the connection with Son.

Brighton are next in action when they travel to Liverpool in the Premier League on Wednesday, 3 February (20:15 GMT).

Tottenham host Chelsea in a London derby in their next match on Thursday, 4 February (20:00 GMT).

READ  Arsenal pencil in Nicolas Pepe's debut ahead of Gunners transfer
Share on FacebookShare on TwitterShare on PinterestShare on Reddit
newsgrooveJanuary 31, 2021