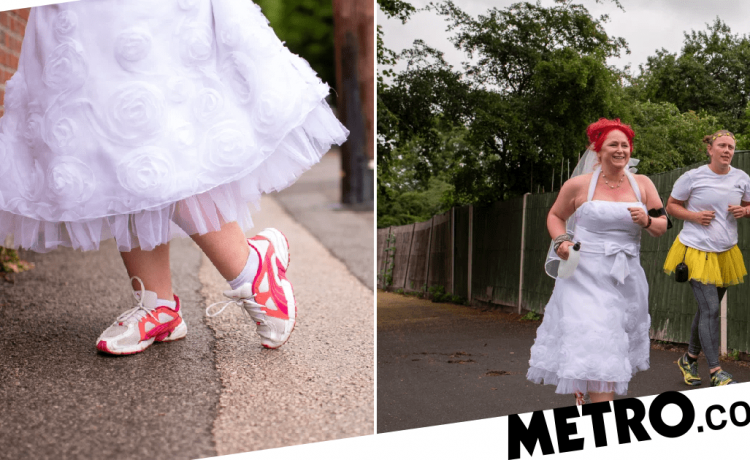 On 27 June, Tracie Stanley-Wills and her partner Craig were meant to getting married with a hand-fasting ceremony in front of 50 friends and family.

Sadly, when coronavirus struck back in March, they decided to postpone until next year.

But Tracie still wore a wedding dress last Saturday on the day that she’d planned to get married, instead running a 5K to raise money for two charities close to her heart.

Having not been much of a runner before as she lives with fibromyalgia, osteoporosis and a false hip, she chose to complete the couch to 5k programme, as it was a challenging but manageable distance for her with her conditions.

‘We were going away for a whole weekend with about 50 people to celebrate love – not just our love but we wanted to show everyone how much to love them. When we heard about coronavirus, we knew the best way to show people we love them was by not putting them at risk.’

Tracie admits that although they knew it was the right decision, it was still difficult coming to terms with the fact that their wedding would be different to how they planned when they have it on the same date next year.

She says: ‘2021 has all its own brides and some of the suppliers we wanted are already booked up for next year. Of course, we will have our wedding next year but it just might not be what we were thinking.’

Initially, at the start of lockdown, Tracie wallowed a little – but realised she needed to do something and the ‘bride without a wedding’ run was born.

She explains: ‘At first, I was thinking I didn’t need to get into a dress now and I was just eating whatever. I saw my weight creeping up slowly and suddenly a few things sort of came together.

‘I decided to do couch to 5K, which was a real challenge for me because of my physical limitations. The gym was shut and running was something I could do during my daily exercise. I realised that the nine-week couch to 5K would take me almost right up to the date we were going to have the wedding.’

Tracie found a £20 short wedding dress she’d bought in a charity shop before lockdown, which she was saving to wear for dancing at the evening segment of her wedding and decided she would run her final 5K in the dress and raise money for charity.

When it came to choosing charities, she decided to spilt the money raised between two that were special to her.

She says: ‘Craig and I are both in long-term recovery. We both went through a rehab called Studio House at different times. Craig now works there.

‘They were starting to struggled financially with COVID and I thought I could help them. Rehabs aren’t a ‘pretty’ cause and I wanted to raise awareness too.

‘For the other cause I asked a friend about raising something for the NHS and they said to pick a hospital so I chose Nottingham’s Queen’s Medical Centre as my mum died there in the ICU.

‘I then realised that there was five kilometres between the two facilities and I could run that. It all just fell together.’

She decided to finish at Wollaton Hall Park beside the hospital to allow friends to meet her from a social distance at the end.

With the route planned and charities chosen, she started the programme running for just a minute before stopping to walk and then repeating in week on.

She says: ‘Week one was 60 seconds and I was dying. I could hardly breathe and I was thinking it was never going to work.

‘I got into the mindset of doing exactly what the programme told me to do. I would run when they told me too, even if it felt like I was running in treacle and not going anywhere.’

It took her a few weeks to understand how to manage her conditions while doing more exercise.

She says: ‘It took some planning to understand when to take painkillers and medication so it would kick in for the run because the first few weeks were hard.’

On the day, Tracie managed to complete the run in an impressive 36 minutes, wearing a wedding dress.

Now taking a rest after hurting her knee, she says she wants to continue once that has healed.

‘I find myself waking up and thinking “I really fancy a run today”. I don’t know how I became that person. Once my knee feels better I will get back out there,’ she says.

So far, Tracie has raised over £1,150. To donate to her fundraising, visit her GoFundMe page.

MORE: Couple marry in their garden with dogs as bridesmaids after wedding was cancelled

MORE: Couple marry at midnight in one of first weddings as lockdown is lifted