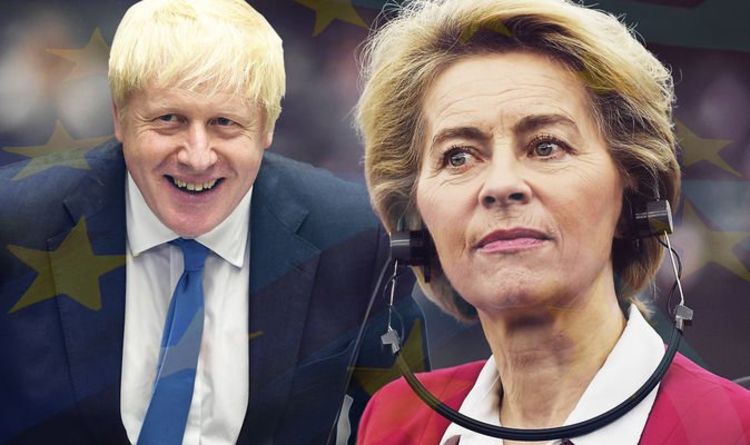 The stark warning from two senior European politicians is the first crack in the united front presented by the 27 members ahead of negotiations. The senior ministers in the Hungarian government have also warned that attacks on Boris Johnson’s Brexit policy by EU leaders are “unacceptable” because the will of the British people needs to be respected.

The comments are a slap in the face for new European Commission President Ursula von der Leyen who this week said a future relationship agreement with the UK could not be concluded by the end of 2020.

Boris Johnson has pledged to enshrine December 31, 2020 in law as the end of the transition period for leaving the EU.

But Ms von der Leyen insisted last week he will have to “extend” or face no deal.

However, the intervention by the Hungarian government represents the first public criticism of her Brexit policy.

Tamas Menczer, Hungarian State Secretary for Information and International Representation, insisted a deal can be completed in time and the European Commission must find the “political will” to do it.

He said: “The British people made their decision. We can find a successful solution.”

The Hungarian government also said that recent attacks on Britain and Mr Johnson by the EU were “unacceptable”.

Mr Menczer said: “You saw a lot of EU leaders criticise Boris Johnson because of his policy.

“We think it is totally unacceptable. Nobody should criticise a leader if he or she is carrying out the will of the people – because that is democracy.”

He said: “After Brexit, Britain will make trade agreements with the US, Australia and other parts of the world.

“If the EU is not able to find a solution that is acceptable for Britain and the EU then we will lose competition with other parts of the world.”

The minister also insisted that the mistakes of Jean-Claude Juncker’s EU Commission must not be repeated.

Mr Menczer said: “We have a new commission. We hope it creates the possibility for a new start. The Juncker commission made a lot of mistakes.

“In Hungary we have a very clear statement – the result of the Juncker commission is illegal migrants in, Britain out.

“It is very clear and totally the wrong way. It is not in the interest of the EU to lose a strong economy, which is also strong on security.”

The minister said Hungary is still sad that Britain is quitting the EU because it was the
leading “sovereignist” member, protecting nation states against the push by the federalists, led by Germany and France, for deeper integration.

He also praised Boris Johnson for showing respect for Hungary when other EU leaders were attacking it over its attempts to deal with illegal migration.

Cabinet minister Katalin Novak, deputy chairwoman of the ruling Fidesz party responsible for international relations and a rising star in European politics, said she was delighted by the Tory victory this month.

She also said the referendum has to be respected because “it is still important for us to show that the decision is still in the hands of the people and nobody can take it away from them”.

READ  The Guardian view on reporting elections: the truth is out there | Editorial